The Event Horizon Telescope (EHT) collaboration, who produced the first ever image of a black hole, has revealed today a new view of the massive object at the center of the M87 galaxy: how it looks in polarized light. This is the first time astronomers have been able to measure polarization, a signature of magnetic fields, this close to the edge of a black hole. The observations are key to explaining how the M87 galaxy, located 55 million light-years away, is able to launch energetic jets from its core. 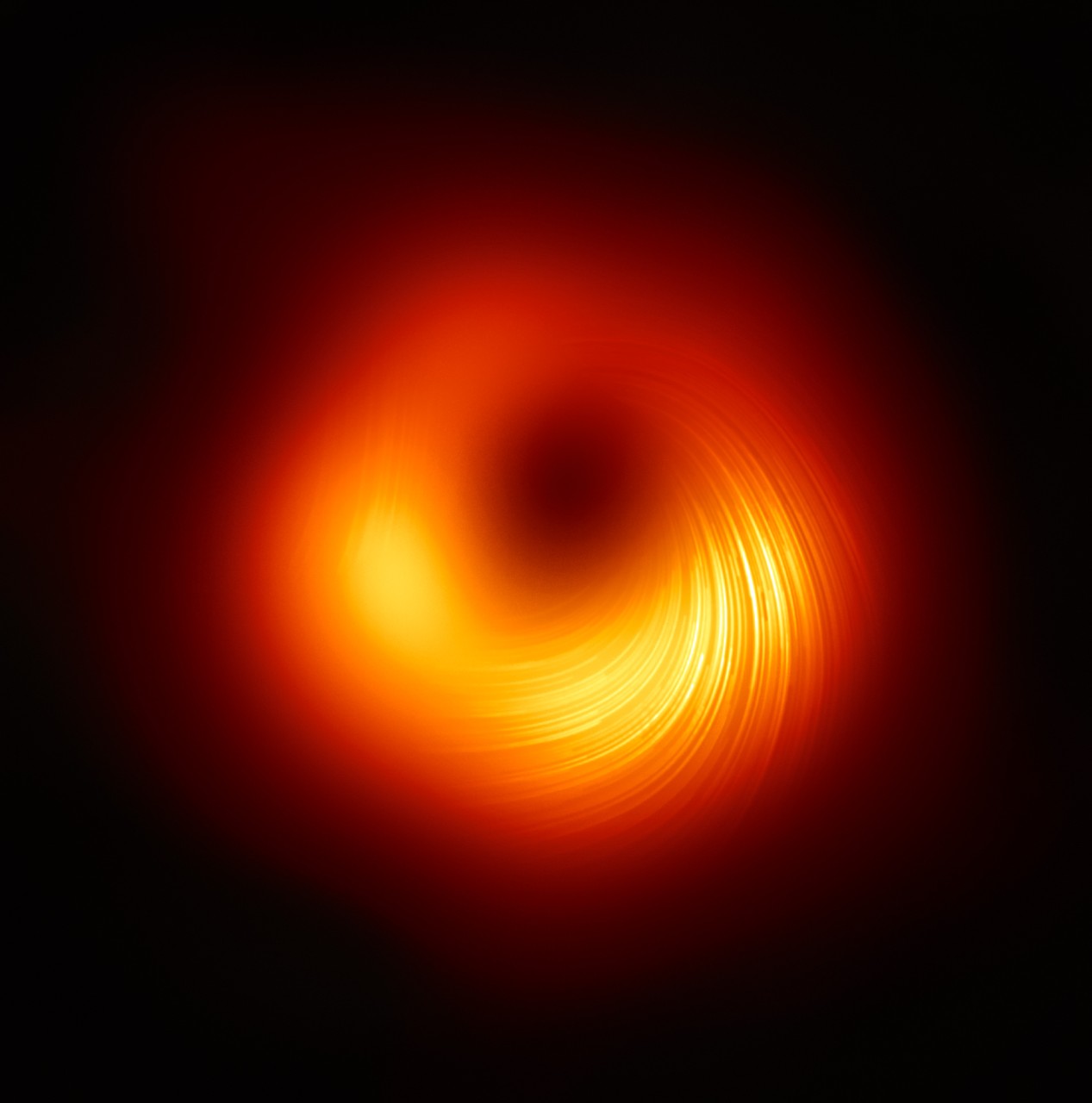 “We are now seeing the next crucial piece of evidence to understand how magnetic fields behave around black holes, and how activity in this very compact region of space can drive powerful jets that extend far beyond the galaxy,” says Monika Mościbrodzka, Coordinator of the EHT Polarimetry Working Group and Assistant Professor at Radboud Universiteit in the Netherlands.

On April 10, 2019, scientists released the first ever image of a black hole, revealing a bright ring-like structure with a dark central region — the black hole’s shadow. Since then, the EHT collaboration has delved deeper into the data on the supermassive object at the heart of the M87 galaxy collected in 2017. They have discovered that a significant fraction of the light around the M87 black hole is polarized.

“This work is a major milestone: the polarization of light carries information that allows us to better understand the physics behind the image we saw in April 2019, which was not possible before,” explains Iván Martí-Vidal, also Coordinator of the EHT Polarimetry Working Group and GenT Distinguished Researcher at the Universitat de València, Spain. He adds that “unveiling this new polarized-light image required years of work due to the complex techniques involved in obtaining and analysing the data.”

Light becomes polarized when it goes through certain filters, like the lenses of polarized sunglasses, or when it is emitted in hot regions of space that are magnetized. In the same way polarized sunglasses help us see better by reducing reflections and glare from bright surfaces, astronomers can sharpen their vision of the region around the black hole by looking at how the light originating from there is polarized. Specifically, polarization allows astronomers to map the magnetic field lines present at the inner edge of the black hole.

“The newly published polarized images are key to understand how the magnetic field allows the black hole to ‘eat’ matter and launch powerful jets,” says EHT collaboration member Andrew Chael, a NASA Hubble Fellow at the Princeton Center for Theoretical Science and the Princeton Gravity Initiative in the USA.

The bright jets of energy and matter that emerge from M87’s core and extend at least 5,000 light-years from its center are one of the galaxy’s most mysterious and energetic features. Most matter lying close to the edge of a black hole falls in. However, some of the surrounding particles escape moments before capture and are blown far out into space in the form of jets.

Astronomers have relied on different models of how matter behaves near the black hole to better understand this process. But they still don’t know exactly how jets larger than the galaxy are launched from its central region, which is as small in size as the Solar System, nor how exactly matter falls into the black hole. With the new EHT image of the black hole and its shadow in polarized light, astronomers managed for the first time to look into the region just outside the black hole where this interplay between matter flowing in and being ejected out is happening.

The observations provide new information about the structure of the magnetic fields just outside the black hole. The team found that only theoretical models featuring strongly magnetized gas can explain what they are seeing at the event horizon.

“The observations suggest that the magnetic fields at the black hole’s edge are strong enough to push back on the hot gas and help it resist gravity’s pull. Only the gas that slips through the field can spiral inwards to the event horizon,” explains Jason Dexter, Assistant Professor at the University of Colorado Boulder, USA, and coordinator of the EHT Theory Working Group.

To observe the heart of the M87 galaxy, the collaboration linked eight telescopes around the world, in coordination with time on ground and space telescopes secured by members of the EHT Multiwavelength Working Group, including Villanova University assistant professor of physics, Joey Neilsen, PhD, to create a virtual Earth-sized telescope, the EHT. The impressive resolution obtained with the EHT is equivalent to that needed to measure the length of a credit card on the surface of the moon.

“It’s incredibly exciting that this new close-up view of M87 allows us to test our models for how matter falls onto black holes,” says Neilsen, an EHT collaboration member. “It’s even more exciting that these models have proven to be successful.”

This setup allowed the team to directly observe the black hole shadow and the ring of light around it, with the new polarized-light image clearly showing that the ring is magnetized. The results are published today in two separate papers in The Astrophysical Journal Letters by the EHT collaboration. The research involved over 300 researchers from multiple organizations and universities worldwide, including Villanova University.

"The EHT is making rapid advancements, with technological upgrades being done to the network and new observatories being added. We expect future EHT observations to reveal more accurately the magnetic field structure around the black hole and to tell us more about the physics of the hot gas in this region," concludes EHT collaboration member Jongho Park, an East Asian Core Observatories Association Fellow at the Academia Sinica Institute of Astronomy and Astrophysics in Taipei.

This research was presented in two papers published today in The Astrophysical Journal.

The EHT collaboration involves more than 300 researchers from Africa, Asia, Europe, North and South America. The international collaboration is working to capture the most detailed black hole images ever obtained by creating a virtual Earth-sized telescope. Supported by considerable international investment, the EHT links existing telescopes using novel systems — creating a fundamentally new instrument with the highest angular resolving power that has yet been achieved.