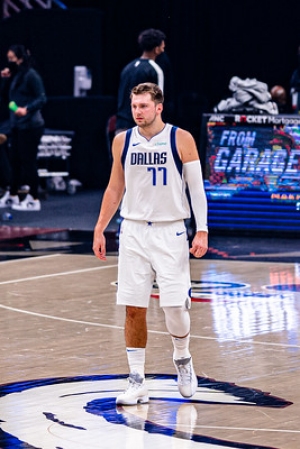 Last week, Dallas Mavericks superstar Luka Doncic petitioned the United States Patent and Trademark Office (USPTO) Trademark Trial and Appeal Board to cancel the “LUKA DONCIC 7” trademark.[1] At the time of registration, LUKA DONCIC 7 covered basketball computer games, and a variety of basketball apparel and gear.[2] Currently, Mirjam Poterbin, Doncic’s mother, holds the controlling ownership of LUKA DONCIC 7.[3]  Poterbin has continually refused to relinquish her ownership rights of LUKA DONCIC 7.[4] Prior to his petition to cancel the trademark, Doncic attempted to negotiate a transfer of control with Poterbin for LUKA DONCIC 7 in July of 2021.[5] According to Poterbin, she protects Doncic’s name from people aiming to control his life and career.[6] Doncic’s petition to cancel LUKA DONCIC 7 is as an effort to reclaim total control of his rights to his name.[7] In a statement to NBA writer Marc Stein, Doncic expressed the importance of controlling his brand.[8]

Doncic has depended on Poterbin to oversee and guide his off-court business prospects since he signed his first professional basketball contract with Real Madrid at thirteen.[9] During his rookie season with the Mavericks, Doncic gave Poterbin his consent to register his full name and number as a trademark.[10] Though Poterbin applied to register LUKA DONCIC 7 in 2018, the USPTO awarded the trademark in 2020.[11]

Just before the 2021-22 NBA season began, Doncic revealed his new logo that was set to appear on all his Jordan Brand shoes and apparel.[12] In association with his Jordan Brand logo launch, the USPTO denied Doncic’s application to register trademarks for “LUKA DONCIC” and “ORIGINAL HOOPS OF LUKA DONCIC” due to their similarity to LUKA DONCIC 7.[13] These conflicting trademarks have prevented Doncic from asserting clear rights to use his name to establish business ventures and a charitable foundation.[14]

According to the USPTO, a cancelation petition initiates a process of litigation.[15] In his petition, Doncic first argues that he is no longer affiliated or associated with LUKA DONCIC 7 or its goods and services, nor does he approve or sponsor any goods or services related to LUKA DONCIC 7.[16] Further, Doncic lays his strongest argument for cancellation by emphasizing that Poterbin has abandoned any rights in LUKA DONCIC 7, as Poterbin has failed to use the trademark.[17] Further, the petition notes that neither Poterbin nor any licensees currently use LUKA DONCIC 7 on any goods and services.[18] In order to maintain a trademark registration, the USPTO requires the trademark to be used in commerce or registered with the intent to use it in commerce.[19]

Surprisingly, there is no definitive instruction or precedent for when a person initially consents to trademark registration and later revokes said consent.[20] Typically, cases involving celebrity trademark cancellations occur when consent was never recorded.[21] The only case of note remotely similar to Doncic is Roger Federer’s conflict with Nike over its continued use of his logo after Federer failed to renew his contract.[22]

Though Doncic was of age to consent to Poterbin, the court will consider his youth and relative inexperience at the time consent was given.[23] However, the appeal board could cancel Poterbin’s registration if Doncic establishes proof that Poterbin is not using the trademark in the U.S. and lacks the intent to continue using it.[24] The Trademark and Trial Appeal Board’s decision on Doncic’s petition will likely impact the Name, Image, and Likeness landscape as athletes who consent to companies to register trademarks referencing them could risk losing control of using their naming and image rights.[25]

[1] See Michael McCann, Luka Doncic Embroiled in Unusual Trademark Dispute With His Mother, Sportico (Sept. 13, 2022), https://www.sportico.com/law/analysis/2022/luka-doncic-trademark-dispute-1234688148/ (reporting that the petition was filed by Luka99, Inc., a multimedia company owned by Doncic that is “devoted to promoting Doncic’s [name image and likeness]”); see also id. (reporting that the trademark refers to Doncic’s jersey number while a member of Real Madrid).

[3] See Ryan Glasspiegel, Luka Doncic in Legal Battle with Own Mom Over Controlling His Trademark, New York Post (Sept. 8, 2022), https://nypost.com/2022/09/08/luka-doncic-suing-his-mom-to-control-his-trademark/ (noting that Donic is in a legal dispute with his mother, Mirjam Poterbin).

[4] See Marc Stein, Doncic Petitions for Trademark Control, Substack: Marc Stein (Sept. 6, 2022), https://marcstein.substack.com/p/doncic-petitions-for-trademark-control (noting that Doncic has “tried for some time to prevent the pursuit of his trademarks from going public”).

[7] See id. (noting that Poterbin’s control of LUKA DONCIC 7 has blocked Doncic from regaining total control of his branding).

[8] See Stein, supra note 4 (reporting that Doncic’s petition to cancel “is the latest step in the All-Star’s months-long quest to regain full control of trademarks that bear his name – several of which are in the hands of his mother Mirjam Poterbin.”).

[9] See McCann, supra note 1 (noting that Poterbin had business experience owning a beauty salon, so it was not odd for her to manage his business because of Doncic’s age).

[10] See Anthony Puccio, Luke Doncic Mired in Trademark Dispute With His Mother, BOARDROOM (Sept. 13, 2022), https://boardroom.tv/luka-doncic-trademark-mother/ (reporting that Doncic, who was 19 at the time, consented to Poterbin managing his business ventures, which included trademark registrations); see also 15 U.S.C. § 1052(c) (prohibiting trademark registrations that include a living person’s name, without that person’s consent in accordance to the Lanham Act).

[11] See McCann, supra note 1 (citing a prior registration with the European Union as rationale for awarding the trademark).

[14] See Stein, supra note 4 (recognizing the issues this causes in Doncic’s business with Jordan Brand, and the establishment of the Dallas – based Luka Doncic Foundation).

[15] See Carson, supra note 6 (adding that conferences between involved parties, a discovery period and trial if settlement is not reached are included in the litigation process).

[16] See McCann, supra note 1 (reporting that the petition argues Doncic’s perceived association with LUKA DONCIC 7 by consumers has proven to be problematic).

[20] See McCann, supra note 1 (noting that the Lanham Act and Trademark Manual of Examining Procedure (“TMEP”) fail to address whether consent may be revoked).

[21] See id. (noting that failing make record of consent and expiration of granted licenses lead to successful trademark cancellation petitions); see also id. (adding that no case has been litigated before the Trademark Trial and Appeal Board similar to Doncic’s)

[22] See id. (mentioning that Federer’s case was “rooted in a separate endorsement contract between the parties.”).

[23] See id. (highlighting that Doncic was “fairly young and inexperienced.”).

[24] See id. (noting that the law technically favors Poterbin as the Lanham Act and TMEP only require consent at the time of registration).

[25] See id. (acknowledging that if Poterbin wins, NIL deals may “permanently jeopardize” athletes ability to use their name, nickname, or likeness as a trademark)