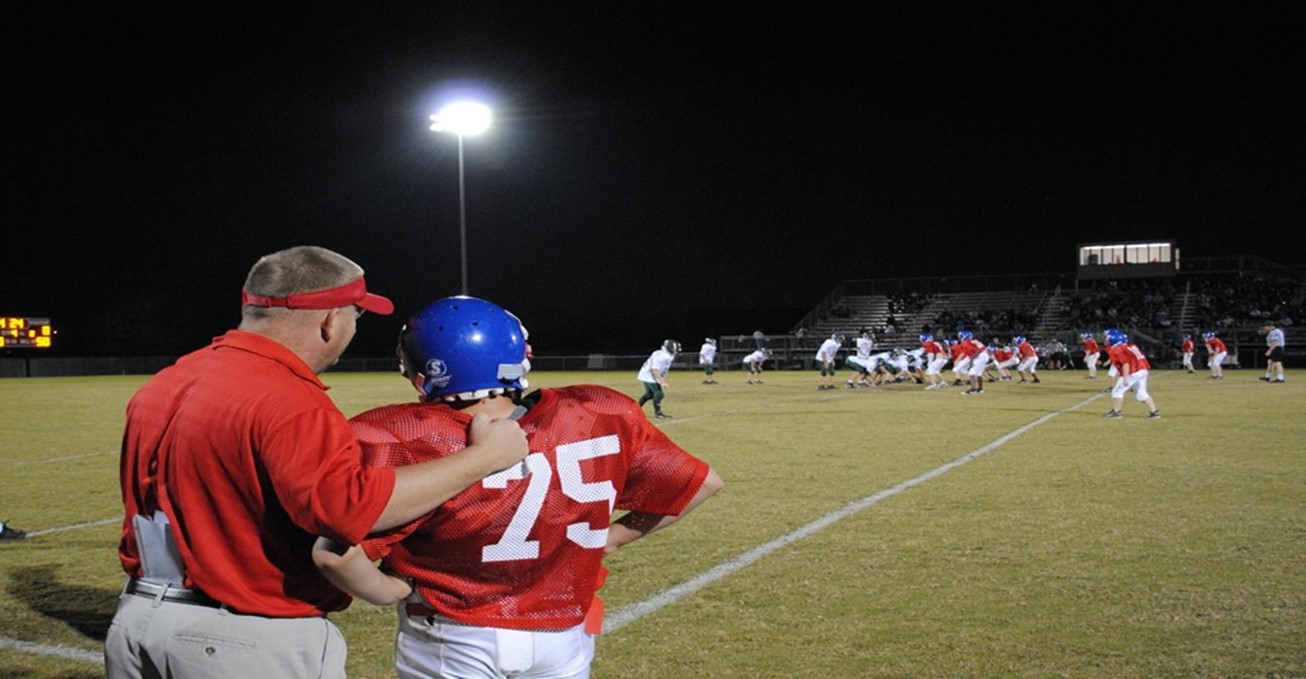 Many football players, fans, and coaches have turned to prayer in hopes of securing wins, avoiding injuries, and appreciating the beauty of the game.[1] However, prayer cost one high school football coach, Joseph Kennedy, his position after he refused to follow orders to stop praying on the field after games.[2] In January, the United States Supreme Court announced it will hear the coach’s claims arising from his dispute with the school district.[3]

How Prayer Led to Lawsuits

Assistant high school football coach Joseph Kennedy was employed at Bremerton High School for approximately eight years, during which he routinely joined together with players in post-game prayer.[4] According to Kennedy, his Christian beliefs required him to pray at the 50-yard line immediately after football games.[5] In 2015, the school principal directed Kennedy to stop leading prayer on the field because it likely violated school policy which aimed to ensure compliance with the Establishment Clause.[6]

Kennedy stopped engaging in his prayer practices for approximately a month, until he requested a religious accommodation and began going to the media to make statements about his intent to continue his prayer practice at the upcoming homecoming game.[7] As the school administration expected and feared, when Kennedy conducted his prayer after the homecoming game, fans rushed onto the field resulting in a frenzy where some students were knocked down.[8]

Kennedy was placed on administrative leave for defying the school directive.[9] At the end of the season, he decided not to renew his coaching contract.[10] Subsequently, Kennedy turned to the courts for relief, arguing the school violated his First Amendment rights to free speech and exercise of religion by restricting his religious expression during games and placing him on administrative leave.[11]

The Long Road to the Supreme Court

Despite years of litigation beginning in 2016, Kennedy has not yet seen his First Amendment claims succeed in court.[12] First, in 2017, the Ninth Circuit upheld the district court’s denial of Kennedy’s request for a preliminary injunction.[13] Then, when Kennedy turned to the Supreme Court in 2018, the Court declined to hear his claim because it reasoned there was more to be decided by lower courts; nonetheless, four Justices made their concerns surrounding the Ninth Circuit’s decision very clear.[14] Specifically, Justices Alito, Thomas, Gorsuch, and Kavanaugh voiced concern about restricting a high school coach’s right to religious expression when the coach is not on duty.[15] Most recently, the Ninth Circuit ruled against Kennedy in 2019 when it held that the school’s allowance of Kennedy’s prayer practices would violate the Establishment Clause.[16]

When Kennedy’s claim reaches the Supreme Court for oral arguments this term, the Court will be deciding two issues.[17] First, whether the First Amendment provides protection to a public-school employee who engages in quiet prayer that is visible to students at school.[18] Second, assuming such religious conduct is protected under the First Amendment, the Court will decide whether the Establishment Clause nonetheless requires public schools to prohibit such conduct.[19]

Praying for a Win at the Supreme Court

Kennedy’s chance of succeeding in his claim may be much higher than previously expected.[20] In the years that have passed since the Supreme Court first declined to hear his case, the Court has become increasingly more focused on hearing claims regarding the First Amendment right to the free exercise of religion.[21] There is no guarantee on how the Court will decide Kennedy’s claim, but it is helpful to understand what issues the Court will be deciding and what possible implications there may be.[22]

Kennedy and his supporters view the school district’s actions and the Ninth Circuit’s holdings as having a “chilling effect” on American citizens’ right to engage in religious expression.[23] Kennedy, represented by a legal religious group, argues the prayer was private speech entirely separate from his job as a coach, such that the school district cannot restrict his speech.[24] Meanwhile, the school district argues that Kennedy’s right to private prayer is irrelevant because the real dispute is about the authority of a public school to protect students.[25] Both Kennedy and the Bremerton School District have gained supporters, but the ultimate decision from the Supreme Court will not be known until the end of the 2021 term and until then, the competing sides will continue to gain support and spark debate surrounding the intersection of school, sports, and religion.[26]

[1] See generally Kelsey Dallas, A Prayer for Every NFL Team, Deseret News (Sep. 14, 2021), https://www.deseret.com/faith/2021/9/14/22667370/state-of-faith-newsletter-pray-app-prayer-for-every-nfl-team (stating recent series of NFL prayers included “sports cliches” but also noting prayers focused on value of teamwork, “maybe even God, too”). For some football fans, prayer in football is no more than praying their favorite team succeeds. See id. (“[I]f I wrote a series of NFL prayers, the reflections would include sentiments like ‘Please, if we must lose, let it not be embarrassing’”). For others, prayer in football is rooted much more in a genuine faith in their religious beliefs and love for football. See id. (“The . . . prayers focus on . . . the idea that no one can succeed in isolation, that each individual players needs his teammates, [and] his coaches . . . .”).

[4] See Kennedy v. Bremerton School Dist., 443 F.Supp.3d 1223, 1228 (W.D. Wash. 2020) (stating from 2008 until 2015 Kennedy regularly engaged in prayer with team members). According to Kennedy, he initially prayed alone but team players started joining him and, eventually, almost all team members took part in the prayer. See id. (“Kennedy recounts that when he began this practice in 2008 he would pray alone. . . . Although the number of participating players varied from game to game, Kennedy recalls that a majority of the team eventually took part.”).

[5] See id. (indicating Kennedy’s religious belief required him to kneel in prayer after each game concluded to give thanks to players, football). Kennedy began committing to this expression of his religious beliefs in 2006, two years before he began coaching at Bremerton High School. See id. (“According to Kennedy, these prayers were private communications with God that Kennedy committed to after watching a 2006 film called Facing the Giants.”). However, Kennedy also conducted prayer in the locker room and gave religious speeches, although those acts were not required by his religious beliefs. See id. (stating these acts were discretionary).

[7] See id. at 1229-30 (acknowledging Kennedy ceased public displays of prayer at games until October 16, 2015, after requesting religious accommodation); see also id. at 1230 (stating Kennedy made media appearances to spread word about intent to pray on field in upcoming game). The media uproar resulted in the school board receiving an influx of complaints, some of which were threatening. See id. at 1230 (“The District also began receiving a large amount of emails, letters, and phone calls regarding the conflict over Kennedy's prayer, many of which were hateful or threatening. . . . This may have been originally triggered by Kennedy's September 11[, 2015] Facebook [post] about getting fired for praying.”).

[9] See id. at 1231 (stating school administration placed Kennedy on paid administrative leave because of “constitutional liability associated with [his] conduct”). Coaching evaluations illustrated that Kennedy’s lack of cooperation and unwillingness to discuss religious accommodations negatively impacted his standing as a coach, although it was Kennedy’s decision not to reapply for the next season coaching position. See id. (describing evaluations of Kennedy’s coaching and noting Kennedy was one of four assistant coaches who decided to not reapply).

[10] See id. (observing Kennedy, plus three other assistant coaches, decided to not renew their coaching contracts for 2016 season).

[15] See Barnes, supra note 12 (“Justice Samuel A. Alito Jr. said the Ninth Circuit’s language could ‘be understood to mean that a coach’s duty to serve as a good role model requires the coach to refrain from any manifestation of religious faith — even when the coach is plainly not on duty. I hope that this is not the message that the Ninth Circuit meant to convey.’”).

[19] See id. (noting second issue to be decided when Kennedy’s claim is heard by Supreme Court).

[21] See id. (“The [Supreme Court’s] new conservative majority has been protective of individual religious rights, and it was not a surprise it took . . . Kennedy’s legal fight . . . .”); see also Howe, supra note 14 (noting Supreme Court is scheduled to hear three additional religious freedom claims this term). While filling its docket for the current term, the Supreme Court declined to hear a claim involving the use of race in college enrollment, but agreed to hear at least three religious freedom claims in addition to Kennedy’s claim. See Barnes, supra note 12 (stating Court declined to hear challenge to college admission policies on same day it agreed to hear Kennedy’s claim); see also Howe, supra note 14 (noting Court will decide issues involving “public funding for private schools that teach religion, spiritual advisers in the execution chamber, and the flying of a religious flag on a city flag pole” during current term).

[23] See Howe, supra note 14 (providing quote from Kennedy, “The religious expression of hundreds of thousands of teachers in the Ninth Circuit is now on the verge of extinction.”).

[25] See Weiss, supra note 12 (noting school district’s briefs stressed school was “faced [with] a stark choice: [e]ither let its employee dictate how school events would be run—even if that threatened the safety and religious freedom of the students—or take the steps necessary to curb the practice.”).