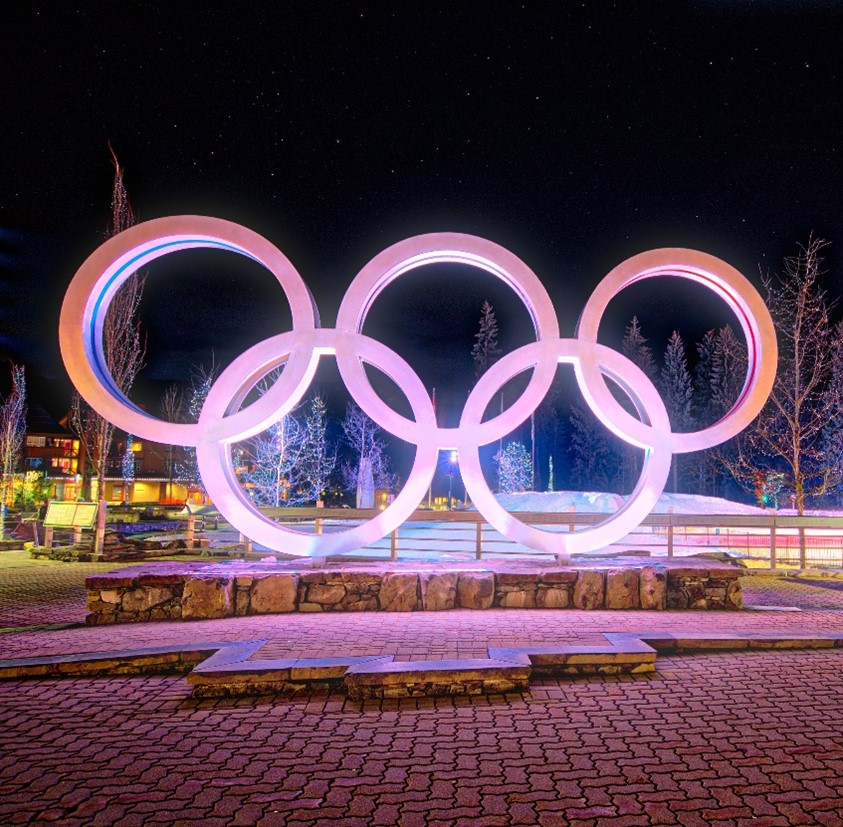 IP Worth Competing For

Every two years, billions of people tune in to watch the best athletes in the world compete for their countries in the Olympic games.[1] The Olympics is undoubtedly a festival of athletic achievement, but it is equally a festival of intellectual property (“IP”).[2] Everything about the Olympics is iconic, and the resulting brand value has made the Olympics “the premier event in terms of sponsorship attractiveness.”[3]

The International Olympic Committee (“IOC”) is a global not-for-profit organization tasked with supporting all aspects of the Olympic games.[4] In addition to broadcasting contracts, the IOC secures sponsors and partners as its primary source of funding.[5] The IOC’s “The Olympic Partners” (“TOP”) program represents the highest level of sponsorship available and includes some of the biggest companies in the world, such as Coca-Cola, Alibaba, Intel, and Samsung.[6] According to the IOC’s 2020 annual report, the organization pulled in total revenue of $5.7 billion during the 2013-2016 Olympic cycle, over a billion of which came from the TOP program alone.[7]

Olympic IP protection is crucial for the IOC to combat ambush marketing[8], and the authority to do so comes from a variety of sources.[9] At the international level, the Olympic Rings are protected by the 1981 Nairobi Treaty, which gives the IOC sole control over commercial use of the Olympic symbol.[10] The IOC also owns a variety of trademarks, registered through World Intellectual Property Organization (WIPO) via the Madrid System, a protocol utilized to register trademarks worldwide.[11]

In addition to the IOC, National Olympic Committees (NOCs), such as the United States Olympic and Paralympic Committee (“USOPC”), represent the Olympic brand and values in each respective country.[12] The USOPC was a non-signatory and sole dissenting vote to the Nairobi Treaty and owns all rights to Olympic properties in the United States.[13] The International nature of Olympic IP results in a spectrum of approaches to IP protection, ranging from the least protective (e.g., Germany) to the United States as the most protective.[14]

Winning by a Landslide: The USOPC’s Enforcement

The USOPC enforces Olympic IP rights primarily using the statutory protections provided by 36 U.S.C. section 220506, which gives the USOPC statutory authority over various Olympic symbols, words, and emblems.[15] The USOPC’s authority over Olympic IP is exceptionally strong in comparison with traditional trademark rights for two reasons: (1) the USOPC does not need to prove likelihood of confusion during disputes, and (2) the USOPC is afforded all protections of the Lanham act while none of the traditional defenses are available.[16] That said, protection under Amateur Sports Act is limited to use of the Olympic properties in trade, and courts have stated that a First Amendment defense may be available for uses not in connection with the sale of goods.[17]

Historically, the USOPC justified its elevated level of protection because of the organization’s lack of governmental funding, as opposed to other NOCs.[18] However, that justification lost some of its credibility when the Supreme Court in San Francisco Arts & Athletics v. United States Olympic Committee affirmed an enjoinment prohibiting San Francisco Arts & Athletics, Incorporated’s (SFAA’s) use of “Gay Olympic Games” for their event.[19] In the decision, the Supreme Court stated that the USOPC’s rights in Olympic properties extend beyond the promotion or sale of goods, and denied SFAA’s First Amendment defense because its expressive use of the word could not be separated from the value and reputation the USOPC creates.[20]

More recently, the USOPC’s aggressive enforcement has resulted in a collection of seemingly harmless entities being threatened with infringement lawsuits.[21] Sometimes, these situations are almost comedic, like in 2004 when an Oregon ferret shelter’s annual “Ferret Olympics” fundraiser event was forced to change its name following the USOPC’s threatened lawsuit.[22] Financing U.S. Olympic teams or preventing unlicensed marketing is one thing, but these situations are inherently different and have pushed the scope of the USOPC’s protection much further than intended.[23]

Carrying the Torch to the Future

Supreme Court Justice Brennan, in his San Francisco Arts & Athletics dissent, predicted the future, capturing the nature of how the USOPC has broadened the scope of its protection since the decision, by noting the “discretion the Act affords to the USOC … creates the potential for significant suppression of protected speech.” [24] While this Olympic IP enforcement is limited in scope, in so far as it is limited Olympic properties, the USOPC and the IOC continue to push the boundary.[25]

In a modern context, the IOC’s guidance for non-Olympic partners extrapolates the protection to social media posts by brands not partnered with the IOC, prohibiting them from reposting an athlete’s posts that contain Olympic content, even in a congratulatory manner. [26] The IOC’s example demonstrating a prohibited action shows a brand retweeting the Team Canada Hockey Team’s opening ceremony picture and adding the text, “Can’t wait to see their performances over the next two weeks!”[27]

While athletes compete for medals, companies are competing for a piece of the Olympic brand value.[28] This level of enforcement and guidance from the Olympic entities is a masterful demonstration of the value IP can hold, and with a brand as iconic as the Olympics, it only makes sense that the IOC and NOCs would protect their IP as ferociously as possible.[29] Consequently, the entities responsible for Olympic IP protection have pushed the limit on what constitutes infringement beyond traditional trademark and NOC justifications.[30] With the 2022 Winter Olympics in Beijing recently ending, and the Director of the China National Intellectual Property Administration (CNIPA) announcing a campaign to put “high pressure” on Olympic IP infringement, one can only wonder when the scope of protection will be pushed further following the Beijing Olympic Games.[31]

[2] For further discussion about the applicability of intellectual property law principles to the Olympics, see infra notes 4-8, 15-24 and accompanying text.

[4] See Overview, Int’l Olympic Comm., https://olympics.com/ioc/overview (last visited Feb. 2, 2022) (“The International Olympic Committee is the guardian of the Olympic Games and the leader of the Olympic Movement. A truly global organisation, it acts as a catalyst for collaboration between all Olympic stakeholders, including the athletes, the National Olympic Committees, the International Federations, Organising Committees for the Olympic Games, the Worldwide Olympic Partners and Olympic broadcast partners.”); see also Funding, Int’l Olympic Comm., https://olympics.com/ioc/funding (last visited Feb. 2, 2022) [hereinafter Funding] (“The IOC is a non-profit organization, dedicated to using the revenue generated from the Olympic Games to assist athletes and develop sport worldwide.”).

[10] Nairobi Treaty on the Protection of the Olympic Symbol, W.I.P.O. 1, 1 (1982) [hereinafter Nairobi Treaty], https://wipolex.wipo.int/en/text/287413 (“Any State party to this Treaty shall be obliged ... to prohibit by appropriate measures the use, as a mark or other sign, for commercial purposes, of any sign consisting of or containing the Olympic symbol, as defined in the Charter of the International Olympic Committee, except with the authorization of the International Olympic Committee.”).

[13] Mem. from U.S. Patent and Trademark Office, Nairobi Treaty, 9 Callmann on Unfair Comp., Tr. & Mono. Appendix 11 § 11:25 (4th Ed. 2021) (“Accordingly, the United States cast the lone dissenting vote against the Treaty on the Protection of the Olympic Symbol at the Diplomatic Conference in 1981 and has no plans to adhere to it.”).

[23] See SFAA, 483 U.S. at 568 (Brennan, J., dissenting) (discussing difference between use in trade, use not in trade, reasoning that non-commercial use is fundamentally different from for-profit commercial use.). The entities in question are non-profit organizations hosting non-commercial events and bringing suit could not be justified by the reasoning in U.S. Olympic Comm. v. Intelicense Corp. See U.S. Olympic Comm. v. Intelicense Corp., S.A., 737 F.2d at 266 (1984) (“It is clear that the Congressional intent in enacting § 380 was to promote the United States Olympic effort by entrusting the USOC with unfettered control over the commercial use of Olympic-related designations. This would facilitate the USOC's ability to raise those financial resources from the private sector that are needed to fund the United States Olympic Movement.”(emphasis added)).

[24] SFAA, 483 U.S. at 561 (Brennan, J., dissenting) (“The statute is overbroad on its face because it is susceptible of application to a substantial amount of noncommercial speech, and vests the USOC with unguided discretion to approve and disapprove others’ noncommercial use of ‘Olympic.’  Moreover, by eliminating even noncommercial uses of a particular word, it unconstitutionally infringes on the SFAA’s right to freedom of expression.”); see also id. at 568 (“This overbreadth is particularly significant in light of the unfettered discretion the Act affords to the USOC to prohibit other entities from using the word ‘Olympic.’  Given the large number of such users, this broad discretion creates the potential for significant suppression of protected speech.”).