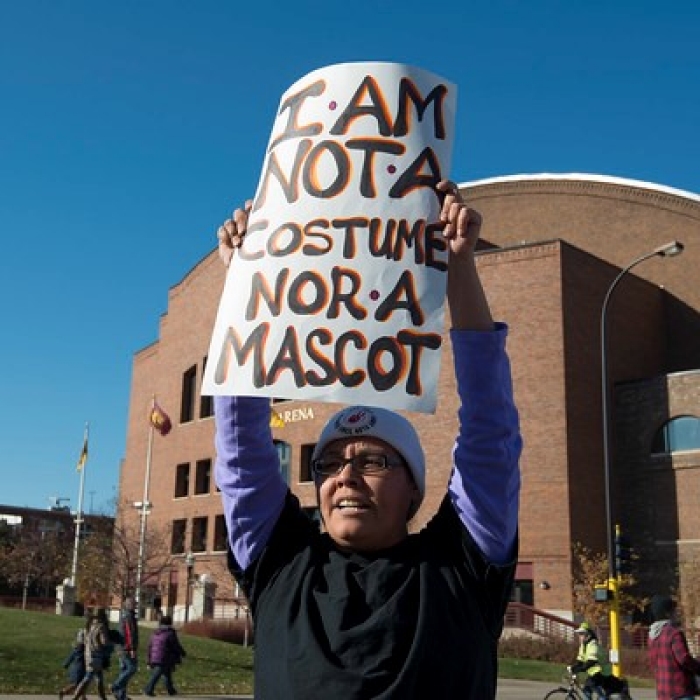 Over twenty public schools in the state of Colorado use Native American-themed names and imagery for their school names or school team names.[1] Examples include the Montrose Indians, the Centennial Braves, and the Lamar Savages.[2] But that number could be dramatically shrinking soon due to a bill signed into law last year by Colorado Governor Jared Polis.[3]

In June of 2021, the Colorado state legislature passed S.B. 21-116 (the “Act”), which prohibits Colorado public schools from using “American Indian mascots” unless they are tribally run or have a preexisting agreement with a tribe.[4] An “American Indian Mascot” is defined under the law as “a name, symbol, or image that depicts or refers to an American Indian tribe, individual, custom, or tradition that is used as a mascot, nickname, logo, letterhead, or team name for the school.”[5] The new Act imposes a steep fine of $25,000 per month to any schools that fail to comply beginning in June of 2022.[6] At least one school district has already abandoned its American Indian-themed mascot in reaction to the new law.[7]

A Push to Eliminate Offensive Names and Images

The purpose of the Act is to end the use of school team names that the Colorado legislature found are offensive or harmful to Native American tribes and schoolchildren.[8] Many Native Americans believe school mascots like “the Indians,” “the Redskins,” and “the Savages” belittle their heritage, perpetuate stereotypes, and even facilitate bullying.[9]

For many years, tribes and activists have made clear that they prefer schools to cease using their Indian mascots.[10] Several tribes collaborated closely with lawmakers in crafting the bill.[11] Supporters of the law have cited studies indicating that these mascots have harmful mental health effects on American Indian children.[12] In accordance with its purpose of erasing specifically derogatory names and images, the Act is not a complete prohibition on Native American mascots.[13] Schools on tribal land are exempt, as is any public school that has an agreement to use a Native American mascot with a federally recognized Indian tribe.[14]

The costs for schools to change their mascots to comply with the new law are expected to be prohibitive, so much so that the state established a fund to aid schools in making the changes.[15] Some school districts estimate that the costs of changing mascots could exceed $200,000.[16] Nor are all schools eager to let go of traditional team names that have been used for decades.[17] It is therefore unsurprising that the new law has drawn a legal challenge.[18]

While some Native American groups support the new Act, not all of them do.[19] A legal challenge has been brought against it in the United States District Court for the District of Colorado by multiple Native American plaintiffs, including the Native American Guardian’s Association.[20] The Plaintiffs agree that some usages of American Indian mascots are offensive caricatures and should be retired.[21] However, they fear that the sweeping nature of the Act will eliminate not only objectionable uses of Native American imagery but also what they see as appropriate uses that honor and bring visibility to American Indian heritage.[22] On top of that, Plaintiffs have constitutional concerns.[23]

The lawsuit claims that the Act violates federal constitutional and statutory law on several grounds.[24] Plaintiffs bring two equal protection claims under the Fourteenth Amendment, a free speech claim under the First Amendment, and a Civil Rights claim under Title VI of the Civil Rights Act of 1964.[25] Colorado’s new statute purportedly violates the Equal Protection Clause in two ways.[26] First, it racially discriminates against Plaintiffs by precluding schools from using names like “Fighting Sioux” and “Indians” while permitting them to use other ethnically charged names like “Fighting Irish,” “Boston Celtics,” or “Vikings.”[27] Second, they claim the Act will force Native Americans to lobby the state legislature every time they want a school name to reflect American Indian heritage, whereas members of other racial groups face no such obstacle.[28]

Next, Plaintiffs argue that the vagueness of the law infringes First Amendment rights as well.[29] Alleging that the law does not sufficiently clarify which uses of Native American names or mascots is acceptable, they assert that it will have a chilling effect on efforts to petition schools to adopt Native American names to honor American Indian heritage.[30] Finally, Plaintiffs claim the law violates the Civil Rights Act, alleging it subjects them to disparate treatment and a hostile environment on the basis of their race or nationality.[31]

A Setback for Plaintiffs in the District Court

A few days after filing their complaint, Plaintiffs filed a request for a preliminary injunction to prevent the Act from going into effect as the litigation proceeds.[32] To qualify for a preliminary injunction, Plaintiffs had to show (1) “a substantial likelihood they would prevail on the merits,” (2) irreparable harm would come to them without an injunction, (3) the harm they would suffer without an injunction would outweigh the harm an injunction would cause the Defendant, and (4) an injunction was not against the public interest.[33] The District Court ruled against Plaintiffs’ motion, primarily because Plaintiffs had failed to show that they would suffer irreparable harm.[34] However, the Court indicated that even the other factors favored the Defendants.[35] The Plaintiffs appealed the District Court’s decision, only for it to be affirmed by the Tenth Circuit Court of Appeals.[36]

Plaintiffs’ attorneys intend to move for summary judgment in February and are considering appealing the Tenth Circuit’s denial of preliminary injunctive relief to the Supreme Court.[37] Meanwhile, Colorado schools retaining their American Indian mascots have only until June before they begin facing crushing fines for noncompliance.[38] The clock is ticking.

[8] See Hindi supra note 3 (reporting that S.B. 21-116 “is about putting a stop to the harm and belittling caricature mascots cause to American Indians, particularly children”).

[17] See McMillin, supra note 10 (reporting Lamar school board’s desire to keep their Savages team name, even if they need to disassociate it from Native American imagery to do so).

[19] For a discussion of Native American opposition to the mascot ban see infra note 20 and accompanying text.

[26] For further discussion of how Plaintiffs believe the law violates the Equal Protection Clause, see infra notes 27-28 and accompanying text.

[28] See id. at 22-23 (claiming that S.B. 21-116 makes it harder for schools to be named after Native American figures than figures from other racial groups).

[30] See id. at 26 (asserting that S.B. 21-116, as written and as applied, will chill Plaintiffs’ efforts to lobby schools to honor Native American heritage).

[38] For further discussion of the financial penalties for non-compliance with the Act, see supra note 6 and accompanying text.