The Black Hole: Allegations and Defenses in the Wake of Jon Gruden’s Resignation as Las Vegas Raiders Head Coach 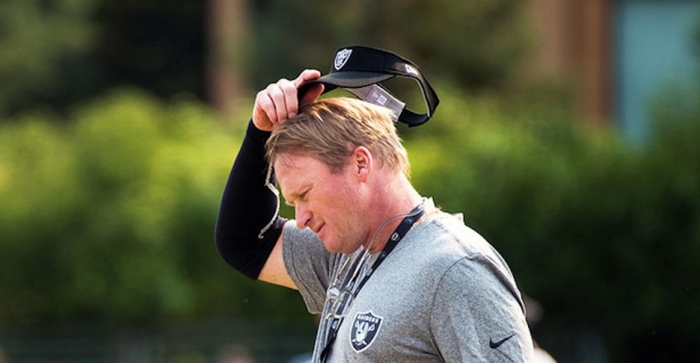 Country music legend Johnny Cash offers a haunting warning in his posthumous 2006 release God’s Gonna Cut You Down: “What’s done in the dark will be brought to the light.”[1]  If former Las Vegas Raiders head coach Jon Gruden was not a believer in Cash’s caution a month ago, it is safe to assume he is now.[2]  A recent National Footbal League (“NFL”)-led investigation uncovered a mass of e-mails sent by Gruden over a seven-year span in which he used insensitive and derogatory language.[3]  The blowback to Gruden’s conduct was swift, and the head coach promptly resigned in disgrace after admitting the e-mails were his.[4]  As reigning NFL Most Valuable Player Aaron Rodgers aptly put it: “That [behavior] doesn’t fly.”[5]

Digging Up the Dirt

When the NFL launched the investigation that led to Gruden’s professional undoing, he was not the target in the league’s sights.[6]  Instead, NFL investigators were focused on the alleged sexist workplace environment created by Washington Football Team owner Dan Snyder and former team president Bruce Allen.[7]  The inquiry revealed numerous e-mail conversations between Allen and Gruden in which Gruden denounced women being employed as referees, criticized the St. Louis Rams for drafting an openly gay player, and condemned players for protesting during the national anthem.[8]  The scandal – born as collateral damage from the Washington investigation – rocked the world of professional sports.[9]

Shortly after Gruden’s first e-mail was published in The Wall Street Journal, the NFL disseminated an internal e-mail to league employees which lamented the coach’s comments as “denigrating, appalling, abhorrent, and contrary to our values of respect and inclusivity.”[10]  Moments later came reports that Gruden was being investigated by the league for potential discipline.[11]

With his resignation foreclosing disciplinary action, what shape discipline would have taken – if any – remains an open question.[12]  Only once before has the NFL suspended a head coach.[13]  In that case, the league imposed a year-long suspension on New Orleans Saints head coach Sean Payton for allegedly overseeing an in-game player bounty system.[14]  Payton’s suspension was notable, among other reasons, because the NFL did not cite a specific violation of league policy in handing down the punishment.[15]  Instead, Commissioner Goodell issued a public reprimand, Payton responded with a public apology, and the matter was concluded.[16]

If punishment from the league had materialized, discipline may have unfolded similarly for Gruden.[17]  NFL head coaches do not belong to labor unions, and the rights they do have “flow through the league.”[18]  Thus, mounting a defense to league-imposed discipline is especially difficult.[19]  And while a Payton-esque reprimand void of specifics could not have been ruled out in Gruden’s case, the league had a plausible claim that he also violated the NFL’s Personal Conduct Policy.[20]

Specifically, the league could have argued Gruden’s behavior violated the provision that forbids “conduct that undermines or puts at risk the integrity of the NFL, NFL clubs, or NFL personnel.”[21]  Because the provision recognizes that team executives and management are held to a “higher standard” of acceptable behavior, potential punishments for Gruden could have been even more severe.[22]

Credible reports claim the unprecedented revelations of Gruden’s conduct would have forced the league to take its time handing down sanctions. [23]  Had punishment been imposed, Gruden would have been wise to prepare his defense by evaluating the grey areas within the Personal Conduct Policy.[24]

The Viability of Gruden’s Defenses

To start, it is unclear whether Gruden’s comments fell within the policy in the first place.[25]  At the time Gruden sent the e-mails, he worked for ESPN as a commentator and was not an NFL employee.[26]  The league was aware of Gruden’s employment status at the time the messages were sent and reportedly considered it a mitigating circumstance.[27]  Further, Gruden’s comments were not issued publicly.[28]  The e-mails in question were privately sent to a third party – with some dating back to ten years old – and the Personal Conduct Policy does not directly address private comments made to third parties.[29]

Nevertheless, the broad language included within the policy could have proven damning for Gruden.[30]  The Personal Conduct Policy penalizes comments made within a workplace setting, and the league had a strong argument Gruden was employed within the NFL “workplace” as an NFL broadcast partner.[31]  That Gruden’s comments were sent to a high-profile league executive only furthers the argument.[32]  Moreover, as the Payton example demonstrates, the NFL does not need to find a policy violation in order to impose punishment.[33]  A simple finding of unsuitable behavior has sufficed in the past, and there is little to suggest it would not again.

A Lesson and a Warning

Commissioner Goodell maintains broad power to impose an array of punishments on NFL coaches for improper behavior.[34]  And although Gruden could have sifted through the NFL Personal Conduct Policy to search for a potential defense, he likely would have found no such recourse.[35]  As the great Johnny Cash foresaw, Gruden’s statements made in the dark were brought to the light.  He should consider himself lucky the league was refused the chance to cut him down.

[4] See id. (noting Gruden’s “quick” resignation following reports of his damning conduct); see also Ryan Gaydos, Raiders’ Jon Gruden Admits More 2011 Emails Included Expletive Shots at Roger Goodell, Fox News (Oct. 10, 2021), https://www.foxnews.com/sports/jon-gruden-2011-emails-iexpletive-shots-roger-goodell (“Gruden told ESPN there were more emails flagged by the NFL . . . that included vulgar criticism . . . Gruden said there may have been between five and seven [of his] emails that were flagged by the league.”).

[5] See Ben Morse, Jon Gruden Removed From Tampa Bay Buccaneers’ Ring of Honor Following Resignation, CNN Sports (Oct. 13, 2021, 5:33 AM), https://www.cnn.com/2021/10/13/sport/jon-gruden-buccaneer-ring-of-honor-spt-intl/index.html. (reporting Rodger’s comment, “Hopefully, we can all as a league learn and grow from this.  Hopefully, it puts people on notice who have some of those same opinions”).

[7] See id. (reporting former employees alleging Snyder, specifically, “‘presided over an organization in which women say they have been marginalized, discriminated against and exploited’”).

[12] See Florio, supra note 10 (describing potential disciplinary avenues for Gruden); see generally NFL Personal Conduct Pol’y  1 (NFL 2016), https://static.nfl.com/static/content/public/photo/2017/08/11/0ap3000000828506.pdf  (emphasis in original) (“Everyone who is part of the league must refrain from ‘conduct detrimental to the integrity of and public confidence in’ the NFL.  This includes owners, coaches, players, other team employees, game officials, and employees of the league office, NFL Films, NFL Network, or any other NFL business.”).

[14] Id. (“Payton ignored instructions from the NFL and Saints ownership to make sure bounties weren’t being paid.”).

[15] See id. (showing although Commissioner Goodell called Payton’s conduct “‘particularly unusual and egregious’ and ‘totally unacceptable,’” he did not allege Payton had violated specific NFL policy in his statement about Payton’s suspension).

[19] See id. (noting “absence of a union for coaches and the presence of contracts and policies that stack the deck in favor of the league . . . .”).

[20] Id. (“The Personal Conduct Policy becomes the first place to search for potential grounds for discipline.”).

[22] See NFL Personal Conduct Pol’y, supra note 12, at 6 (“Ownership and club or league management have traditionally been held to a higher standard and will be subject to more significant discipline when violations of the Personal Conduct Policy occur.”)

[24] Florio, supra note 10 (“Nothing in the current policy directly address the use of racist language in a communication with a third person, even if a violation from 10 years ago would qualify for discipline.”).

[27] Breech, supra note 23 (“At the time of the emails, he was an ESPN employee, which means he most likely won’t be subject to the NFL’s personal conduct policy.”).

[28] See Florio, supra note 10 (“Gruden would likely claim, if disciplined under [broad] standard, that it was a private comment not a public statement.”).

[29] Id. (“Nothing in the current policy directly addresses the use of racist language in a communication with a third person . . . .”).

[30] Id. (“The league could then try to claim that Gruden said what he said while working for an NFL broadcast partner, and that the definition of “workplace setting” in the policy pulls those remarks within its purview.”).

[32] See Florio, supra note 10 (Gruden sending emails in his role as high-profile employee of NFL broadcast partner to “. . . executive with an NFL team could qualify as behavior occurring within a ‘workplace setting.’”).

[33] See id. (noting Payton “was suspended for all of 2012 based on flimsy evidence and no meaningful basis for fighting it”).

[34] Id. (“Basically, if the league decides to take action against a coach, it will do it— and the coach won’t have many viable options in response.”).