The Race for Justice: Will Caster Semenya Clear the Last Hurdle of her Legal Battle Before Tokyo 2021? 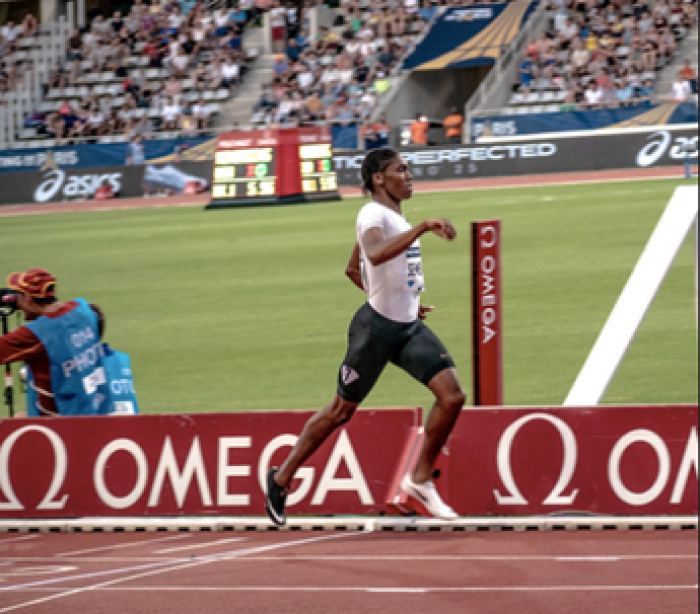 On your marks…: Caster Semenya’s Story

Semenya, who has referred to herself as “supernatural[ly]” talented, is one of the five to ten percent of women with hyperandrogenism.[5]  This means that Semenya’s body produces testosterone at much higher levels than are traditionally found in women.[6]  World Athletics, the governing body for track and field formerly known as the International Association of Athletic Federations (IAAF), has regulations governing athletes with hyperandrogenism, often referred to as Differences of Sex Development (DSD), that leave Semenya with few choices: (1) take hormone-suppressing medicine such as birth control to decrease her testosterone, (2) train for a distance in which the DSD regulations, described below, do not apply, or (3) walk away from the sport entirely.[7]  World Athletics’ DSD Regulations have strong support as well as fierce opposition, and they raise legal and social questions regarding gender binary in athletics, and what the male-female binary means for athletes such as Semenya or for athletes who identify as transgender in Tokyo 2021 and beyond.[8]

The DSD Regulations, which went into effect on November 1, 2019, are an updated version of World Athletics’ prior Hyperandrogenism Regulations.[9]  The DSD Regulations prevent DSD athletes with testosterone levels elevated above a certain level from participating in middle-distance races.[10]  If women with higher-than-average testosterone levels, such as Semenya, wish to participate in middle-distance races, they must self-medicate to lower their testosterone below the required level.[11]

Passing the Baton: Semenya’s Relay through the Court Systems

In 2019, Semenya and Athletics South Africa (ASA) sued World Athletics in the CAS, the international independent institution for settling sports-related legal disputes, arguing that World Athletics’ DSD Regulations discriminated against certain athletes by “limit[ing] female runners’ naturally high testosterone levels.”[15]  The CAS ruled against Semenya in her final appeal to the independent body in 2019, finding that the policy requiring female DSD athletes to medically reduce their testosterone was discriminatory, but recognizing that unlike Indian runner Dutee Chand’s case in 2015 challenging the Hyperandrogenism Regulations, World Athletics’ successfully demonstrated that “the discrimination against Semenya was ‘necessary, reasonable, and proportionate’ to maintain fairness in women’s track.”[16]  Following this loss, Semenya appealed to the Swiss Supreme Court, “essentially alleg[ing] a violation of the prohibition of discrimination.”[17]  However, the Swiss Supreme Court rejected Semenya’s appeal from the CAS in September 2020, functionally upholding the legality of World Athletics’ “testosterone rules.”[18]  This left Semenya with just one final avenue of appeal, to the European Court of Human Rights (ECHR) – Semenya filed her appeal with the ECHR in February 2021, just a few months ahead of this summer’s Olympic Games.[19]  Semenya’s appeal “ask[s] the court to find Switzerland to have ‘failed in its positive obligations to protect her against the violation of her rights under the European Convention on Human Rights.’”[20]

The Legal Hurdles: What Legal Issues Do the DSD Regulations Raise?

Semenya is not alone in her fight against hormonal suppression as a hurdle to participating in her chosen races – two other athletes were affected by the change in rules that disallowed women from running certain distances without lowering their testosterone to a specific level.[21]  When Indian runner Dutee Chand challenged the Hyperandrogenism Regulations in 2015, she won her case at the CAS on the grounds that World Athletics, then IAAF, had not proven that testosterone gave athletes an advantage, and CAS gave World Athletics two years to “find evidence of the degree of performance advantage provided by increased levels of the hormone.”[22]  World Athletics did just that, offering the DSD Regulations following two years of research – leaving Semenya to challenge the DSD Regulations on other grounds.[23] After her initial challenge in the CAS, Semenya had to make a different argument from that of Chand’s in 2015, and challenged World Athletics’ regulation of testosterone levels as discriminatory for its limited application to female athletes affected by DSD.[24]  This discrimination claim raises similar concerns for transgender athletes to those of hyperandrogenic athletes - concerns that may shift the weight of World Athletics’ interest in a level playing field for female competitors, as transgender athletes continue to feature more heavily in international professional sport and as international bodies continue to recognize potential problems with a binary gender division.[25] Legal scholars have also suggested that the requirement of hyperandrogenic athletes to self-medicate to lower testosterone levels is unethical and in conflict with World Athletics’ anti-doping policy.[26]

Thinking Long-Distance: What does this mean for Semenya’s bid in Tokyo 2021 and Beyond?

The European Court for Human Rights is unlikely to review, let alone decide, Semenya’s case prior to the Tokyo Olympics this summer.[27]  However, Semenya refuses to let her legal battle prevent her from participating – she has announced her intention to race the 200 meter race on the South African track and field team this summer.[28]  Semenya’s personal best in the 200 meter race is 23.81 seconds, well below her previous personal best of 24.26 seconds but nowhere near her comparatively dominating times in the 800 meter race.[29]  Her 200 meter time is still a full second above the women’s 200 meter Olympic qualifying time of 22.80 seconds, making Semenya’s participation heavily dependent on how much she can bring her 200 meter race time down.[30]  With qualifying events pushed to June 18 through June 27, 2021 from the same dates in 2020 due to the coronavirus pandemic, Semenya has an increasingly narrow window to improve her time enough to qualify for Tokyo 2021.[31]

[6] See id. (noting women do naturally produce testosterone, but at lower levels than Semenya and other women with hyperandrogenism).

[8] For a discussion of the legal issues Semenya raised as well as potential future issues, see infra notes 21-26 and accompanying text.

[10] See Explanatory Notes/Q&A: Eligibility Requirements For the Female Classification (Athletes with Differences of Sex Development), IAAF Athletics (May 1, 2018), https://www.worldathletics.org/about-iaaf/documents/health-science (noting only middle distances were included because evidence showed greatest advantage to females with high testosterone in those distances).

[13] See id. (reporting maximum testosterone level for women with DSD under Hyperandrogenic Regulations was ten nanoliters of testosterone per liter of blood (nl/l), which was reduced to five nl/l in DSD Regulations).

[20] See Caster Semenya Files Lawsuit in European Court: ’This Fight is Not Just About me’, Sport24 (Feb. 25, 2021), https://www.news24.com/sport/OtherSport/Athletics/caster-semenya-files-lawsuit-in-european-court-this-fight-is-not-just-about-me-20210225 (reporting Semenya’s lawyers’ description of case as “ongoing fight for dignity, equality, and the human rights of women in sport”).

[21] See Dunbar & Imray, supra note 11 (noting Francine Niyonsaba from Burundi and Margaret Wambui of Kenya were also disallowed from participating).  There are also other athletes affected whose names were not disclosed due to medical confidentiality.  See id. (explaining World Athletics disclosed that there are others, but not their names).

[23] See Romo, supra note 9 (“The latest guidelines are the result of two years of scientific research by the organization, including a 2017 study commissioned by the IAAF containing what it said is evidence connecting high testosterone level and improved performance.”).

[25] See Caster Semenya Loses Appeal for Equal Treatment, Human Rights Watch (May 1, 2019), https://www.hrw.org/news/2019/05/01/caster-semenya-loses-appeal-equal-treatment (“The United Nations Human Rights Council passed a resolution noting that the IAAF regulations ‘are not compatible with international human rights norms and standards, including the rights of women with differences of sex development’ and expressing concern at ‘the absence of legitimate and justifiable evidence for the regulations.’ The Human Rights Council also found ‘no clear relationship of proportionality between the aim of the regulations and the proposed measures and their impact.’”); see also Alexandra Adkins, Trapped in the Binary Divide: How Forced Contraceptives Violate the World Anti-Doping Code, 35 Am. U. Int’l L. Rev. 531, 553-559 (2020) (“World Medical Association called for World Athletics to immediately withdraw the new DSD Regulations and urged physicians not to implement the new World Athletics rules.”); East, supra note 5 (quoting Bioethics lecturer from King’s College London that “the [IAAF] relies too heavily on a binary distinction of sex in terms of males and females, which does not reflect nature.”).

[27] See id. (“It’s unlikely there would be a resolution [from the ECHR] before the Tokyo Olympics next summer.”).

[28] See Paul Gittings, ‘Supernatural’ Semenya Turns to 200m Sprint to Salvage Track and Field Career, CNN Sports (Mar. 14, 2020), https://www.cnn.com/2020/03/14/sport/caster-semenya-200m-sprint-tokyo-olympics/index.html (“‘My dream has always been, and will continue to be, to compete at the highest level of sport,’ Semenya announced in a statement on her Instagram account. ‘So in order to pursue my goals and dreams, I have decided to change events and compete in the 200m.’”).

[32] See Caster Semenya Switching to 200 Meters in Bid to Run at Olympics supra note 30 (“While Semenya says she is being discriminated against, the issue is perhaps one of the most complex faced by professional sports . . . .”).