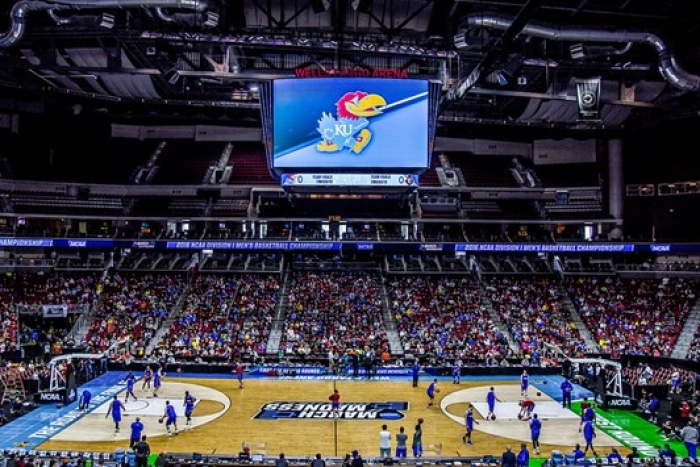 In 2017, former Adidas employee, James Gatto, former Adidas consultant, Merl Code, and business recruiter, Christian Dawkins, were implicated in a scandal involving various high-profile college basketball recruits.[1]  The scandal involved a scheme to get high-profile recruits to matriculate at certain universities through bribes.[2]  Generally, the scheme consisted of bribing five-star recruits to attend Adidas-sponsored programs.[3]  For example, Brian Bowen’s family was paid $100,000 to entice him to attend Louisville to play basketball.[4]  Although this evidence about Bowen’s recruitment was the initial claim in the case against Gatto, Code, and Dawkins, further evidence at trial showed that the corruption was evident throughout college basketball.[5]  Gatto, Code, and Dawkins were charged with wire fraud, conspiracy to commit wire fraud, and providing impermissible benefits to top recruits to entice them to attend Adidas-sponsored schools.[6]  Prosecutor in the case, Edward B. Diskant, contended that the defendants “conspired to hide [their] actions from the universities involved,” which, as a result, defrauded the universities.[7]  The government argued that the defendants defrauded the universities of all the scholarships that the universities had awarded under “false pretenses.”[8]  As a result, several high-profile universities were included in the initial indictment as “victim schools.”[9]

In October 2018, the U.S. District Court found the defendants guilty of wire fraud and conspiracy to commit wire fraud.[10]  Ultimately, Gatto was sentenced to nine months in prison, and Code and Dawkins were each sentenced to six months for their part in the scheme.[11]  U.S. District Judge, Lewis Kaplan explained that the sentences were somewhat lenient because he believed the three had “learned their lesson.”[12]  While their sentences were lenient, Gatto received the longest sentence due to his role as the “boss” in the scheme.[13]  The defendants remained free, however, until the outcome of the appeal was reached.[14]

The discovery of this scheme exposed the dark side of college basketball recruiting and brought the corruption that exists in college basketball to light.[15]  Gatto, Code, and Dawkins were not the only ones implicated in the scandal: four college basketball coaches, clothing executive Rashan Michel, and investment advisor Munish Sood were also involved.[16]  Ultimately, the Federal Bureau of Investigation also charged these coaches in relation to the scandal for fraudulently influencing high school recruits to sign with their schools. [17]

In January 2021, the three-judge appellate panel upheld the convictions of Gatto, Code, and Dawkins.[23]  Although the defendants’ claimed that they lacked the fraudulent intent necessary for guilt because they “were convicted of a fraud they did not know about,” the Second Circuit rejected this theory.[24]  Defendants further argued that even if there was a scheme, the government failed to prove that the athletics-based aid of the universities was “an object” of the scheme.[25]  The court also rejected this argument, ultimately affirming the trial court’s ruling.[26]  The Second Circuit found that the defendants’ scheme relied on the universities awarding athletic-based aid to ineligible student-athletes who would likely have attended another university if they were not offered financial aid.[27]  “Honest services” fraud also existed because coaches at all universities are required to report any National Collegiate Athletic Association (NCAA) rules violations, and as a result of the scheme, various coaches have betrayed their duties by failing to report rules violations – in some cases even facilitated the rules violations.[28]  Thus, the defendants’ actions here, deprived the schools of “honest services.”[29]

Notably, the court carefully removed itself from the debate about the business of college sports.[30]  The Second Circuit specifically stated that it would not enter the debate, and instead explained that they were only focusing on the specific actions of the defendants.[31]  This was not a surprising decision due to the changes on the near horizon as name, image, and likeness legislation continues to take hold.[32]  While Gatto, Code, and Dawkins could petition the Supreme Court for a writ of certiorari, it is unlikely any appeal would survive, due to the selective number of cases the Supreme Court agrees to hear each term.[33]  Ultimately, while the courts have now taken a stand against college basketball corruption by upholding the convictions of Gatto, Code, and Dawkins, there is still much to be done to fully cleanse college basketball of widespread corruption.[34]  While the NCAA has started to crack down on this corruption, due to the lengthy investigation process, there are still outstanding recruiting infractions cases.[35]  To deal with some of these complex NCAA infractions cases, the NCAA recently created the Independent Accountability Resolution Process (IARP).[36]  Once the outstanding NCAA infractions cases related to the federal investigation have been concluded by the NCAA, the NCAA will hopefully be on the path to cleansing the corruption evident in college basketball recruiting.[37]

[3] See id. (noting recruits would declare for draft after first or second year of college, and signing endorsements with Adidas with help of agents).

[14] See Christian Berthelsen, Appeals Court Upholds Convictions in NCAA Bribery Case, Bloomberg (Jan. 15, 2021), https://www.bloomberg.com/news/articles/2021-01-15/appeals-court-upholds-convictions-in-ncaa-bribery-case (explaining defendants were convicted and sentenced to prison, but because they appealed, they were allowed to remain free pending the appeal).

[20] See id. (noting defendants insisted that the government’s portrayal of their intent was wrong).

[21] See Associated Press, Appeals Court Upholds Dawkins, Gatto and Code’s Convictions in College Basketball Scandal, Sports Illustrated (Jan. 15, 2021), https://www.si.com/college/2021/01/15/christian-dawkins-james-gatto-convictions-upheld-college-basketball-scandal (noting Second Circuit found that the fact that the actions were a common occurrence in college basketball programs was not an adequate justification and stated that “others are engaging in improper behavior does not make it lawful”).

[22] See McCann, supra note 2 (highlighting Judge Lewis Kaplan also noted that “the perceived unreasonableness or unfairness of the NCAA’s amateurism rules” was not on trial in this case).

[24] See McCann, supra note 2 (noting trial court found that defendants “were sophisticated actors who were involved in all aspects of top-tier basketball in America”).

[30] See Gatto, 986 F.3d at 110 (noting although “a successful men’s basketball program is a major source of revenue at certain major universities,” the court maintained that it would “not be drawn into a debate over the extent to which college sports is a business”).

[31] See Schlabach, supra note 10 (“[O]ur task is to determine whether the government proved beyond a reasonable doubt that Defendants knowingly and intentionally engaged in a scheme, through the use of wires, to defraud the Universities of property.”) (quoting Second Circuit).

[34] See Gatto, 986 F.3d at 129 (noting “ends, however, do not justify the means, and that others are engaging in improper behavior does not make it lawful”); see also Pat Forge, Three Years Ago, the College Basketball Corruption Scandal Promised a Reckoning. Where Is It?, Sports Illustrated (Oct. 21, 2020), https://www.si.com/college/2020/10/21/college-basketball-scandal-sec-recruiting-daily-cover (emphasizing slow pace of NCAA’s process for addressing situation, stating “if nothing is done, the message is that cheating is O.K.”).

[35] See Mark Schlabach, Your Guide to College Basketball’s Ongoing NCAA Investigations, ESPN (Nov. 6, 2020), https://www.espn.com/mens-college-basketball/story/_/id/30262819/your-guide-college-basketball-ongoing-ncaa-investigations (noting NCAA has taken time to address major infractions cases because “there are layers of procedural safeguards legislated into the infractions process for the benefit of schools and involved individuals who find themselves in a case”). The NCAA also waited to begin investigating these basketball infractions cases until May 2019 to cooperate with federal authorities. See id. (explaining NCAA did not begin investigating basketball cases until after more than year at request of federal prosecutors).