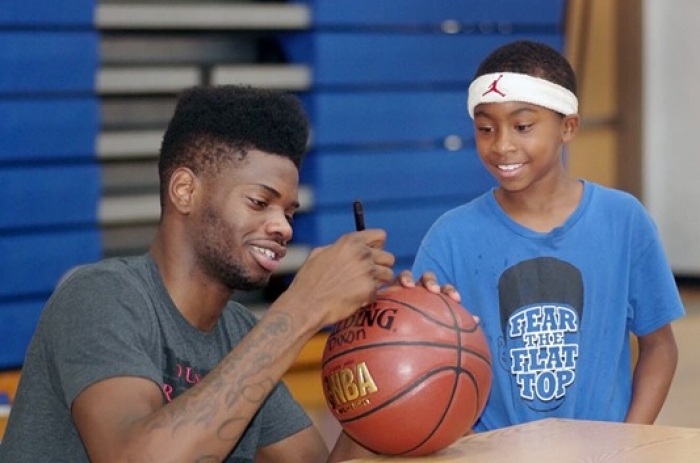 Nerlens Noel filed a complaint against his former agent, Richard “Rich” Paul and Klutch Sports Group, LLC (“Klutch Sports”) on August 23, 2021.[1]  Many National Basketball Association (“NBA”) agents cheered the move against the noted representative, reportedly a personal friend of Lebron James, who has developed a reputation for poaching high-profile clients from major agencies.[2]  Questionable methods for obtaining new clients and managing client income are nothing new in professional sports.[3]  High-profile abuses among athlete agents have resulted in substantial regulation of the profession by players associations over the years.[4]  However, Noel’s lawsuit is one of the first high-profile cases involving the backchannel negotiations and client-poaching strategies common among certified agents in the NBA.[5]

Noel began his career as a sixth overall pick in the 2013 NBA draft when he joined the New Orleans Pelicans.[6]  Noel later traded to the Philadelphia 76ers for the 2014–15 season and then to the Dallas Mavericks in early 2017.[7]  Noel played twenty-two games for the Mavericks, and, following the 2016–17 season, became a restricted free agent.[8]  As a restricted free agent Noel would have been free to sign an offer with any team, but his original team could also retain him by matching other offers.[9]  He was offered a four-year, $70 million contract to continue playing for the Mavericks.[10]  Then, around that same time, Noel met Rich Paul at Ben Simmons’ birthday party in Los Angeles.[11]  According to Noel’s complaint, described below, Paul told him that he was a “100 million man” and that he would get him a “max deal” if he terminated his relationship with his current agent, Happy Walters, and hired him instead.[12]  Paul also allegedly advised Noel to cease negotiations with Dallas, accept a single-year qualifying offer, and seek a maximum deal on the free-agent market the following season.[13]  A qualifying offer is a standing offer for a one-year contract that has the option to become a regular contract if the player signs it.[14]  Noel terminated his agency relationship with Walters and entered into a Standard Player Agent Contract (“SPAC”), which is the “standard form agreement used for all NBA player and agent contracts,” with Paul on August 21, 2017.[15]

During the 2017–18 season, Noel tore a ligament in his thumb and missed forty-two games, after which Noel claims Paul lost interest in him as a client.[16]  Noel further claims that Paul did not present any proposals or strategies on how he might secure a long-term contract and that Paul neglected to return phone calls from interested teams.[17]  Absent Paul’s conduct, Noel asserts that he would have signed a $70 million contract with Dallas but instead earned only $12 million during the same period.[18]

The complaint lists causes of action for breach of fiduciary duty, breach of contract, and breach of the duty of good faith and fair dealing. [19]  Noel is seeking “a declaratory judgment...; a judgment against Defendants for damages as may be established at trial, including an amount for any actual, exemplary, or punitive damages; attorney’s fees and costs; and all other relief to which he may be entitled and/or which the Court deems just and proper.”[20]

What this Means for Agent-Player Relations

Starting in the mid-1970s, athletes began to find themselves with newfound bargaining power in contract negotiations and had a resulting need for effective representation.[21]  Growing concern over perceived abuses of power by player agents led to the National Basketball Players Association (“NBPA”) establishing a series of regulations to deal with agent abuses, including violations of fiduciary duties as labor negotiators.[22]

While Noel’s lawsuit is one of the first high-profile cases calling attention to client-poaching strategies used by agents, the practice of poaching is common among certified agents throughout the league, and the NBPA does not prohibit agents from contacting other certified agents’ clients.[23]  Moreover, the NBPA has not shown much interest in doing so.[24]  Some within the NBPA speculate that the association will settle an agreement between the two parties of this particular case before this issue reaches a jury.[25]  The NBPA specifically requires dispute arbitration in order to give the association a more direct role in protecting players’ interests.[26]

Ultimately, it seems likely that Noel will have an uphill battle at trial if it ever reached that stage.[27]  Noel’s case hinges on the premise that Paul failed to act in his best interest in advising him to turn down the Maverick’s $70 million offer and did not otherwise sufficiently market him to other teams in the league.[28]  In his defense, Paul might potentially argue that he was simply advocating a strategy that has been employed by various professional athletes throughout the years with varying degrees of success.[29]  Noel’s claims that Paul refused to take or return phone calls from representatives of teams looking to recruit him may also be hard to prove in court, as finding someone willing to confirm these factual details may prove challenging.[30]

Non-attorney agents such as Paul are usually only accountable to players’ unions and collegiate restrictions.[31]  Whether Noel’s case proceeds to the next stage of litigation or whether the NBPA will step in to arbitrate the issue is still to be seen, but in the past when athletes believed they have been ill-served because their agent was focusing on other clients, “that player will have a limited (if any) recourse through [their] players' association.”[32]

[13] See id. (alleging Paul convinced Noel to reject Maverick’s $17 million offer); see also Schuyler Dixon, Why Nerlens Noel is taking $4.1M qualifying offer from Dallas Mavericks, Star Telegram (Aug. 29, 2021) (“Two people with knowledge of the agreement said Saturday that Noel accepted a $4.1 million qualifying offer for one year, essentially betting on himself that he can get something closer to a max contract as an unrestricted free agent next summer.”).

[15] See Complaint, supra note 1, at 4 (explaining concept of SPACs, including conformity of Noel’s contract with SPACs).

[19] See id. (explaining method for determining Noel’s claim for $58 million in lost income while requesting declaratory judgment be issued “pursuant to Tex. Civ. Prac. & Rem. Code § 37.001 et seq, that [the mandatory arbitration clause found in] § 7 of the SPAC is invalid, void, and unenforceable and that the agreement to arbitrate this dispute is otherwise contrary to public policy and is unenforceable and void”).

[22] See Collins v. Nat’l Basketball Players Ass’n, 850 F. Supp. 1468, 1471 (D. Colo. 1991) (“Player agents were unregulated by the NBPA before 1986.  By the mid-1980s, a substantial number of players had complained to the officers of the NBPA about agent abuses .  . . .  In response to these abuses, the NBPA established the Regulations, a comprehensive system of agent certification and regulation, to insure that players would receive agent services that meet minimum standards of quality at uniform rates.”).

[28] See Complaint, supra note 1, at 8 (arguing Paul failed to perform fiduciary duties owed to Noel by offering bad advice, neglecting him to concentrate on other clients).

[29] See Chris Gaine, 12 Athletes Who Turned Down Mega Contracts and Missed Out on Millions, Complex (Mar. 21, 2018), https://www.complex.com/sports/2018/03/12-athletes-who-turned-down-mega-contracts-missed-out-millions/ (explaining athletes often are advised to turn down potentially lucrative contracts in hopes of larger contracts in later years); see also Stacey B. Evans, Sports Agents: Ethical Representatives or Overly Aggressive Adversaries?, 17 Vill. Sports & Ent. L. J. 91, 105 (2010) (comparing conflicting cases of Manny Ramirez, who followed advice of agent Scott Boras that was ultimately to his detriment, and Gary Sheffield, who fired Scott Boras to serve as own agent also to his detriment).

[30] See Fischer, supra note 2 (reporting no representatives mentioned by Noel in his complaint would comment on factual accuracy of his claim).

[32] See Doman, supra note 31, at 66 (“Non-attorney agents, accountable only to the players' unions and collegiate restrictions, basically may do anything except bribe (‘induce’) athletes into representation agreements.”).