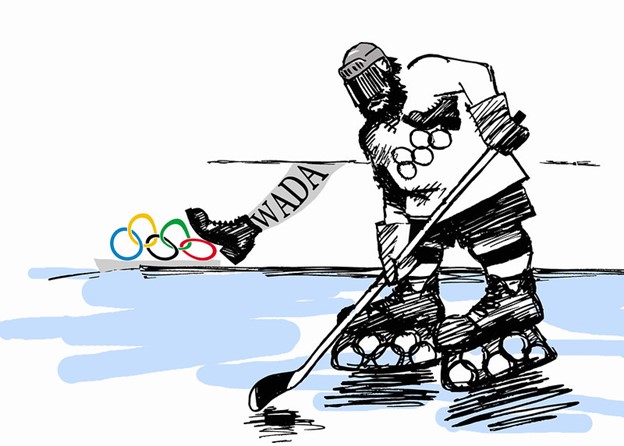 The battle over how severely to penalize Russia, the All Russia Athletics Federation, and its athletes for doping violations has finally come to an end.[1]  Shortly before the new year, the Court of Arbitration for Sport (CAS) decided to deliver a present to Russia and its athletes by showing exceptional leniency.[2]  While Russia and its athletes rejoiced, the outcome rankled many others in the international sport community. [3]  The final penalty spotlights the complexities of delivering a meaningful judgment in this domain.

Although rumors had swirled for several years suggesting Russia’s athletes were evading anti-doping measures, there was no proof to back up these suspicions.[4]  A December 2014 German documentary changed that. [5]  Not only did it show that individual athletes were using performance-enhancing drugs, but the documentary also detailed a state-sponsored doping program.[6]  The documentary’s release demanded a formal response from the organization tasked with addressing doping in sports, the World Anti-Doping Association (WADA).[7] Subsequently, WADA launched a formal investigation.[8]  The resulting report of its Independent Commission (IC) detailed an extensive doping operation that implicated multiple agencies and the Russian government’s direct involvement in its success.[9]  The information gathered led to a ban against Russia’s participation in international competitions in 2015.[10] However, WADA’s IC left return to competition in Russia’s court.[11]  As the IC report noted, “[t]imely action on their part should mean that no significant competitions will be missed.”[12]  The All Russia Athletics Federation (ARAF) decided not to challenge the decision.[13]  It seemed Russian athletes might even be able to represent the country in the 2015 Summer Olympics in Rio.[14]

As the summer approached, the defection of a doctor key to its doping program exposed the brazenness of the doping program.[15]  WADA recommended follow up to review the status of Russia’s compliance with anti-doping measures.[16]  WADA recommended against Russia’s participation at Rio.[17]  WADA also issued a three-year ban to Russia’s anti-doping agency, which removed its authority to oversee testing of its athletes.[18]  Despite the open knowledge of Russia’s non-compliance, its athletes were permitted to compete in the 2018 Winter Olympics.[19]

Dissention in the Ranks

The original, WADA proposed, ban raised questions of equity.[20]  The subsequent investigation raised questions of due process.[21]  The person tasked with making recommendations to WADA and termed an Independent Person was arguably biased – he was one of the initial panel members.[22]  However, an article authored by the IP in 2009 explains why this was inconsequential: CAS arbitration panels review all information.[23]

Nonetheless, these underlying issues exploded in late 2018 shortly after WADA admitted Russia’s anti-doping agency, RUSADA, back to the organization.[24]  It soon emerged that RUSADA had engaged in a massive cover-up of the testing data.[25]  WADA responded quickly, issuing a recommendation that Russia and its athletes should be banned from all competitions for four years.[26]  Fortunately for Russia and its athletes, countries have the right to appeal WADA sanctions.[27]  Unlike its 2015 decision, this time Russia appealed, and prevailed.[28]  The CAS ruling not only reduced the ban to two years but also lessened the severity of the WADA recommendations.[29]

Concern for individual athletes ultimately upended WADA’s recommended sanctions.[30] There was a prevailing sentiment that in punishing current officials and athletes, WADA also jeopardized current clean athletes and future athletes unfairly.[31]  There was also the issue that due to the data manipulation, any chance athletes had of pressing their case and proving their innocence were seemingly lost.[32]  While CAS recognized the concerns of the international community, it tried to balance those concerns against the issues of fairness.[33]  In announcing its ruling, CAS effectively split the difference.[34] With its role as final arbiter, and against the backdrop of the due process concerns, it delivered watered-down sanctions to preserve a charade of fair play.

[2] See CAS Decision in the Arbitration WADA v. RUSADA, Court of Arbitration for Sport 1 (Dec. 17, 2020), https://www.tas-cas.org/fileadmin/user_upload/CAS_Media_Release_6689_decision.pdf (“The Panel’s orders include, inter alia, the possibility during the two-year period for any athlete or

athlete support personnel from Russia to participate in or attend the Olympic and Paralympic Games (winter or summer) and any world championships organised or sanctioned by a WADA signatory. . . .”).

[3] Kremlin Happy Russian Athletes Can Compete at Olympics, Expresses Regret Over Doping Ruling, ESPN (Dec. 18, 2020), https://www.espn.com/olympics/story/_/id/30544059/kremlin-happy-russian-athletes-compete-olympics-expresses-regret-doping-ruling (“Russian sports officials were elated about the ruling because the new restrictions will be weaker than before.”).

[6] See The Independent Commission Report #1 World Anti-Doping Agency (Nov. 9, 2015) [hereinafter IC Report], https://www.wada-ama.org/sites/default/files/resources/files/wada_independent_commission_report_1_en.pdf (“On 03 December 2014, the German television channel ARD aired the documentary ‘Top Secret Doping: How Russia makes its Winners,’ alleging the existence of a sophisticated and well established system of state-sponsored doping within the All Russia Athletics Federation (ARAF), the governing body for the sport of athletics in Russia, recognized as such by the responsible international federation (IF), the International Association of Athletics Federations (IAAF).”)(citations omitted).

[9] See IC Report, supra note 6 at 27-28 (describing ways in which Russia’s government assisted in doping network, noting “law enforcement agencies were involved in the efforts to interfere with the integrity of the samples.”)

[13] See Russia Accepts Full, Indefinite Ban from World Athletics Over Doping Scandal, The Guardian (Nov. 26, 2015), https://www.theguardian.com/sport/2015/nov/26/russia-full-indefinite-ban-world-athletics-doping-scandal (reporting ARAF decided to accept ruling without seeking appeal via hearing because ARAF was hoping to remediate its standing before the 2016 summer Olympics so athletes could participate).

[14] See Olympics: Why Has Russia Been Banned and What Happens Now? ABC News,  https://www.abc.net.au/news/2017-12-06/olympics-why-has-russia-been-banned-and-what-happens-now/9230446 (last visited Feb. 5, 2021) (explaining lack of time to investigate fully before Rio but noting that some athletes from ARAF prohibited from Rio Olympics).

[15] See WADA Statement: Independent Investigation Confirms Russian State Manipulation of the Doping Control Process, World Anti-Doping Agency (July 18, 2016) [hereinafter WADA Statement], https://www.wada-ama.org/en/media/news/2016-07/wada-statement-independent-investigation-confirms-russian-state-manipulation-of (“They were so confident in the inability of outsiders to detect what was going on, that they operated in the same manner during the time that WADA’s 2015 Independent Commission (IC) was carrying out its investigation.”)

[19] See Russia Banned from Competing At 2018 Winter Olympics, Athletes May Compete as 'Neutrals,' ABC News,  https://www.abc.net.au/news/2017-12-06/russia-banned-from-2018-winter-olympic-games/9230220 (last visited Feb. 5, 2021) ((showing reluctance of competition leaders to exclude all athletes from country even when doping is wide-spread).

[20] See IC Report, supra note 6, at 311 (“The IC expects that at least part of the response to this Report will be a predictable concern that some “innocent” athletes may be excluded from participation in competitions if the recommendations in the Report are adopted by the appropriate organizations.”).

[25] See id. (indicating outrageousness of cover-up attempt led to need for significant penalty against Russia and its athletes).

[29] See id. (noting reduction in length of ban from four to two years and permission for athletes to wear national colors).

[30] See IC Report, supra note 6 at 36 (“The [Independent Commission] expects that at least part of the response to this Report will be a predictable concern that some ‘innocent’ athletes may be excluded from participation in competitions if the recommendations in the Report are adopted by the appropriate organizations.”)

[31] See Mercan, supra note 28 (noting panel “considered matters of proportionality and, in particular, the need to effect cultural change and encourage the next generation of Russian athletes to participate in clean international sport”).

[32] Data tampering from Russia throws into doubt 145 cases, WADA report concedes, Inside the Games,  https://www.insidethegames.biz/articles/1087530/wada-admit-145-cases-could-fail(last visited Feb. 5, 2020) (providing details of how matter moved from identification of problem to review to penalty recommendations).