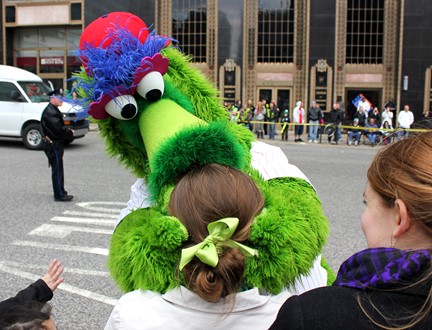 Nothing brings such distinct character to a team quite like its mascot.[1]  Whether through its appearance or through interactions with fans, a mascot is the beloved,–or resented,–muse of audiences home and away.[2]  In managing the art of entertainment, however, sometimes mascots go too far.[3]  Take for example, the recent news of a sexual harassment lawsuit filed against the man behind the Los Angeles Kings’ mascot, Bailey the Lion, who has a record of out-of-bounds conduct when donning the costume.[4]  While some courts may reasonably expect fans assume the risk of injury for things like foul balls, at what point could a mascot’s antics cross the line into liability?[5]  After all, Justice Cardozo, then Chief Justice for the Court of Appeals of New York, has described these arenas of sport as amenable to clownery and horseplay, “not the pleasures of tranquility.”[6]  Yet, teams and venues may find it in their best interest to incorporate responsible safety measures in monitoring mascot performance.[7]

In analyzing the extent of risk inherent in attending games, courts look at the essentiality of the dangerous activity in question.[8]  In other words, if the risk were eliminated completely, can the game go on?[9]  Unfortunately for mascots and their enthusiasts, their antics are not exactly integral to the sport, at least according to a 1997 California case.[10]  That court moreover found defendant’s duty to not increase the already inherent risks present.[11]  Hence, a mascot or its representative defendant may be liable if the mascot’s distraction causes a spectator to suffer an injury from an otherwise assumed risk, although this liability scheme appears quite fact-dependent.[12]

Compare a different outcome from an Ohio court a decade later, where mascot distraction was not enough to rid of spectator plaintiff’s duty to pay attention to foul balls.[13]  Even more, the court implied a further duty to observe mascots during the game, for mascots have become such common actors in the entire experience.[14]  Still, Ohio recognizes that “attendant circumstances” will ultimately affect how much risk the spectator inferably assumes, meaning, specific facts or context will determine whether there is a direct versus implied assumption of risk.[15]

For mascot-induced risks in more recent litigation, a common smoking gun actually is a gun, for t-shirts and hot dogs.[16]  In 2014, the Missouri Supreme Court found that Hotdog Launch, the Kansas City Royals mascot Sluggerrr’s feature air gun stunt that resulted in a detached retina for one spectator, was not an inherent risk to game attendants as a matter of law.[17]  Furthermore, because Hotdog Launch was not an integral component to the Royals game experience, Sluggerrr and the team owed spectators the duty of reasonable care that extends beyond spectators’ mere assumption of risk.[18]  In a similar case, the Houston Astros mascot Orbit’s t-shirt bazooka severely fractured a woman’s finger two years ago.[19]  Her case is scheduled for trial this year in a Houston district court, where she is alleging failure to warn for unreasonable risk of harm involving extreme degree of risk.[20]

To likely no one’s surprise, Philadelphia is no exception to mascot misconduct, especially considering the Phillie Phanatic has earned the title of “most-sued mascot in the majors.”[21]  The Phanatic has been sued on separate occasions for climbing onto a woman, throwing a woman into a pool, and hugging a man too hard.[22]  The Phanatic also launched a hot dog at a woman and injured her face and eye, although she pursued no legal action.[23]  Outside of the baseball field, the fresh-faced Philadelphia Flyers’ mascot, Gritty, is already affirming his bully reputation, by allegedly taking a running start and punching a 13-year-old boy earlier this year.[24]  According to the Philadelphia Police Department, the action did not constitute assault.[25]

Of course, mascots are not the sole perpetrators of misconduct; they are victims as well.[26]  Fans, opponents, or players caught up in the energy, have injured mascots by pushing, punching, beating, or in one case, hitting the mascot in the head with a bat.[27]  This is not to downplay or ignore those plights, but the burden of extra caution could sensibly fall more upon the mascot, considering the likelihood of one litigious spectator in the crowd in the wrong place at the wrong time who might not exactly care for the comedy.[28]  Especially for the Phanatic and Gritty, fans’ demands for mascots to continue outdoing themselves should not obscure mascots’ attention to the risks involved with such unbridled spirit; no harm, no foul.[29]

[2] See Meredith Cash, My completely arbitrary yet definitive ranking of mascots from each team in the MLB, NBA, NFL, and NHL, Bus. Insider (June 26, 2020), https://www.businessinsider.com/ranked-top-mascots-from-the-nba-nfl-mlb-and-nhl-2020-1 (judging professional sports teams’ mascots based on image and behavior).

[3] See Jason Rossi, The Phillie Phanatic and 8 Other Sports Mascot Injuries, Sportscasting (June 21, 2018), https://www.sportscasting.com/phillie-phanatic-other-sports-mascot-injuries/ (describing incidents when mascots hurt themselves). This blog post concerns mascot incidents during performance of the role itself, and not the behavior of individuals acting outside the scope of their role. Cf. Jack Harris, Kings fire man who performed a mascot after sexual misconduct allegations, L.A. Times (Oct. 2, 2020), https://www.latimes.com/sports/hockey/story/2020-10-02/kings-fire-man-who-portrayed-mascot-sexual-harassment-allegations (noting recent sexual harassment lawsuit against man who works as mascot).

[4] See Associated Press, LA Kings Fire Mascot Accused of Sexual Harassment, NBC L.A. (Oct. 2, 2020), https://www.nbclosangeles.com/news/sports/la-kings-fire-mascot-accused-of-sexual-harassment/2438185/ (noting termination of employee following lawsuit).  Media coverage of the lawsuit does not specify whether the alleged harassment took place while mascot was in uniform. See id. (“We [the team] are not in a position to provide further details or comments on this matter due to pending litigation.”); but see City News Service, Lawsuit alleges inappropriate behavior by L.A. Kings’ mascot, Bailey, L.A. Daily News (Nov. 23, 2017), https://www.dailynews.com/2017/11/23/lawsuit-alleges-inappropriate-behavior-by-la-kings-mascot-bailey/ (describing incident of same man’s sexual misconduct against fan in elevator while in costume).

[5] See Murphy v. Steeplechase Amusement Co., 250 N.Y. 479, 482 (1929) (“One who takes part in such a sport accepts the dangers that inhere in it so far as they are obvious and necessary, just as a fencer accepts the risk of a thrust by his antagonist or a spectator at a ball game the chance of contact with the ball.”)

[6] Id. at 483 (distinguishing dangers that are “obscure or unobserved, or so serious as to justify the belief that precautions of some kind must have been taken to avert them”).

[8] See Summer J. v. United States Baseball Federation, 258 Cal. Rptr. 3d 615, 618-621 (Cal. Ct. App. 2020) (noting “judicial view of fans’ accountability for their own protection from balls hit into the stands” while finding extra protective netting would “minimize the risk of injury to spectators without altering the nature of baseball”).

[12] See id. at 124 (noting mascot’s distraction caused plaintiff to turn away from field of play).

[14] See id. (considering mascots’ prevalence “it is perfectly reasonable for a spectator at one of these games to expect to observe those mascots during the normal course of the game”).

[19] See Michael McCann, Broke Her Finger with Launched T-Shirt. Does She Have a Case?, Sports Illustrated (Apr. 9, 2019), https://www.si.com/mlb/2019/04/10/astros-lawsuit-fan-broken-finger-orbit-mascot-t-shirt-cannon (reporting plaintiff’s filing of complaint).

[26] See Amber Lee, Strangest Mascot Injuries, Bleacher Rep. (Dec. 3, 2013), https://bleacherreport.com/articles/1874897-strangest-mascot-injuries (describing injuries upon mascots inflicted by themselves or by others).