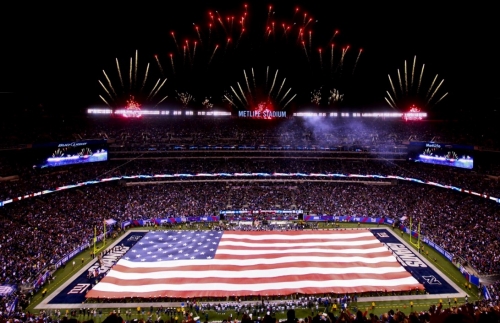 A couple of years ago, Colin Kaepernick sparked a great controversy when he took a knee during the national anthem in protest of racial injustice.[1]  While a sincere expression of Kaepernick’s sentiments, protected by his First Amendments rights, some argued that NFL team owners are “private business owners, [and] could have a rule requiring their players as employees to stand during the anthem” and players “can do free speech on their own time.”[2]  However, many have been of the sentiment that “those speaking out on matters of public interest should not be punished for finding an effective place from which to be heard.”[3]  What does our Constitution say about this?[4]  Can the government force anyone, including athletes, to speak or remain silent on matters that are of great personal value to them?[5]  Our Supreme Court answered this question in Minersville School District v. Gobitis,[6] a case involving a group of Jehovah’s Witness students who refused to salute the flag and recite the pledge of allegiance.[7]  In Gobitis, the Court noted that “[c]onscientious scruples have not, in the course of the long struggle for religious toleration, relieved the individual from obedience to a general law not aimed at the promotion or restriction of religious beliefs.”[8]  A few years later, the Court revisited this question again in West Virginia State Board of Education v. Barnette.[9]  In a majority decision that overturned Gobitis, the Barnette Court held that compelling children in public school to salute the flag was a violation of their constitutional rights and freedom of speech and religion.[10]  Even though there is a “kind of [] sacred bundled between football, war, and American identity,” and in football, “you see patriotism on steroids;” compelling athletes to adhere to certain speech related behavior is not a one size fits all stipulation.[11]  It follows that “[t]he principle of Barnette, however, does not extend so far as to bar a government from requiring of its employees or of persons seeking professional licensing or other benefits an oath generally … It is not clear, however, to what degree the government is limited in probing the sincerity of the person taking the oath.”[12]  Similarly within the private sector of professional sports leagues, compelled speech did not violate the First Amendment when in May 2018, the NFL issued a new policy, mandating players to stand for the national anthem.[13]  A requirement that is not applicable to other football teams such as public-school athletes.[14]

Are Players Being Compelled to Speak?

Generally, the state is limited by the First Amendment and is not given the power to  “require[] affirmation of a belief and an attitude of mind” unless the state can “prove that . . . to remain passive during the ritual creates a clear and present danger that would justify an effort even to muffle the expression.”[15]  It is long held that local authorities compelling citizens to salute the flag “transcends constitutional limitations on their power and invades the sphere of intellect and spirit which it is the purpose of the First Amendment to our Constitution to reserve from all official control.”[16]  Additionally, under the compelled speech doctrine, the government is not allowed to urge citizens to adhere to certain, approved behaviors.[17]  However, this protection is not always afforded to those under the management of private institutions.[18]  As Erwin Chemerinsky, Dean of Berkeley Law School, clearly stated “[t]he First Amendment doesn’t apply to private institutions. . . . [p]rivate employers can fire employees for their speech without having to worry about the First Amendment.”[19]  Therefore, it is safe to say that as far as compelled speech is concerned, it seems other athletes, such as public-school football players, who are not bound by contractual obligations, have more right to free speech than their NFL counterparts.[20]  Indeed, for NFL players, football is not just a hobby but a lucrative occupation that confines their speech and behavior to the wishes of their employer, the team owners and the NFL.[21]  As NFL employees, players can be reprimanded and even discharged from their duties for non-compliance to the league’s rules because NFL teams are private actors not bound by the protections of the First Amendment.[22]  As with most contractual restrictions, NFL players are not bound when they are not playing.[23]  In other words, although teams are subject to fines if players kneel or sit during the national anthem, the NFL has provided a locker room exception that “allow[s] players to opt out of standing for the anthem as long as they are off the field.”[24]

In spite of the fact that the NFL is technically bound by the Constitution, its contractual agreements with players, empowers it to skirt around players’ First Amendment rights and impose policies that would otherwise constitute compelled speech.[25]  As one blogger noted, “[a]mazingly, this might be one of the areas of the law where public school students might have more rights than an NFL player.”[26]  The First Amendment only “prevents the government from forcing you to engage in compelled speech,” whereas, the NFL, not being bound by it, has a legal right to discipline protesting players.[27]  Beyond contractual obligations, the First Amendment’s protection of speech is applicable to all, given that one of our Constitution’s goals is to encourage public debate by all.[28]  In 1943, the Court in Barnette emphasized this point by declaring that “[i]f there is any fixed star in our constitutional constellation, it is that no official, high or petty, can prescribe what shall be orthodox in politics, nationalism, religion, or other matters of opinion or force citizens to confess by word or act their faith therein.”[29]  Speech cannot be stopped simply because it is unpopular, offensive, or objectionable.[30]  While many agree that NFL players, as other citizens, should hold their right to freedom of expression and convey their ideas even in protests, this point is juxtaposed to the underlying verity that an NFL player is an employee of the league and therefore subjected to its contractual obligations.[31]  Furthermore, for many sports leagues, such as the NFL, standing in reverence to the national anthem and the flag before sporting events, is a tradition embedded in American sports as an expression of public patriotism and national identity, which is analogous to great sportsmanship in America.[32]

[4] See David Emery, Did the Supreme Court Rule in 1943 That No One Can be Forced to Participate in Patriotic Rituals?, Snopes (Aug. 18, 2018), https://www.snopes.com/fact-check/supreme-court-rule-1943-patriotic-rituals/ (discussing how compelled speech violates First Amendment).

[8] Gobitis, 310 U.S. at 594 (holding government could require allegiance to flag as a symbol of national unity and security).

[9] See W. Va. State Bd. of Educ. v. Barnette, 319 U.S. 624, 633-34 (1943) (“Here it is the State that employs a flag as a symbol of adherence to government as presently organized.  It requires the individual to communicate by word and sign his acceptance of the political ideas it thus bespeaks.”); see also  Flag Salutes and Other Compelled Speech, supra note 5 (elaborating on another compelled speech case with different outcome).

[10] See Barnette, 319 U.S. at 633-634 (“To sustain the compulsory flag salute we are required to say that a Bill of Rights which guards the individual's right to speak his own mind, left it open to public authorities to compel him to utter what is not in his mind.”); see also Flag Salutes and Other Compelled Speech, supra note 5 (noting that in Barnette the Court came to different conclusion overturning Gobitis).

[13] See Roger Goodell's Statement on National Anthem Policy, NFL (May 23, 2018), https://www.nfl.com/news/roger-goodell-s-statement-on-national-anthem-policy-0ap3000000933962 (“Personnel who choose not to stand for the anthem may stay in the locker room until after the anthem has been performed.”); see also Roos, supra note 11 (noting NFL’s policy requiring players and personnel to stand during national anthem).

[15] Flag Salutes and Other Compelled Speech, supra note 5 (noting one of few instances when government can halt freedom of speech).

[19] Eli Rosenberg, What the NFL’s New Rules for Anthem Protests Really Mean for the First Amendment, Wash. post (May 24, 2018), https://www.washingtonpost.com/news/early-lead/wp/2018/05/24/what-the-nfls-new-rules-for-anthem-protests-really-mean-for-the-first-amendment-according-to-experts/ (noting lack of constitutional protection against employers and specifically NFL by its players).

[27] Id. (distinguishing that as a private actor, NFL not under same requirements as government when it comes to freedom of speech).

[30] See Policinski, supra note 2 (emphasizing government cannot interfered with freedom of speech even if it is offensive).