Should NCAA be holding schools like the University of Kansas accountable
for actions of the third parties who defrauded them? 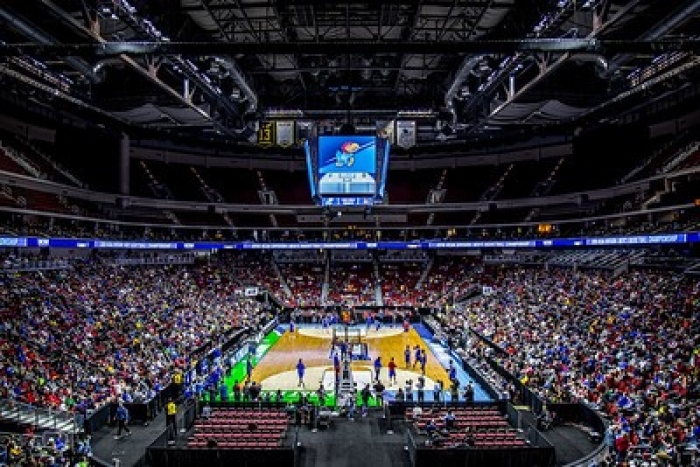 As this March proceeds conspicuously Madness-free[1], Division I basketball remains as active as ever. Appeals are underway in the U.S. Court of Appeals for the Second Circuit relating to the trinity of federal cases exposing illicit payments within the world of NCAA Division I basketball.[2] The first case involved Chuck Person, Associate Head Coach at Auburn University, who in March of 2019 pleaded guilty to one count of conspiracy to commit bribery for having accepted payments from co-defendant Rashan Michel, owner of an Atlanta-based clothing company to whose services Coach Person would steer his student-athletes upon their decision to pursue professional careers.[3] Second, Assistant coaches Lamont Evans (Oklahoma State), Emanuel “Book” Richardson (Arizona), and Anthony “Tony” Bland (University of South Carolina) pleaded guilty to having accepted bribes from Michel, financial advisor Munish Sood, former Adidas consultant Merl Code, and sports agent Christian Dawkins in exchange for pressuring players and their families to retain their services as professional athletes.[4] Finally, Code, Dawkins, and Sood were joined by Adidas’ former Director of Sports Marketing Jim Gatto in their prosecution for having made cash payments—allegedly at the request of Division I schools like University of Louisville and University of Kansas—to high-school recruits and their families, as incentive to commit to the schools. Additionally, James Gatto and co. would offer scholarship deals to the universities, who then offered athletic scholarships to the students who were not actually NCAA-eligible and who would be encouraged to retain the services of Dawkins and Sood as professionals.[5]

Now that the trials are over, the NCAA has emerged from the background to conduct its own investigation and levy the appropriate penalties on schools central to those cases.[6] For some of those schools, however, there is widespread debate about whether it is appropriate to scrutinize and penalize schools who were cast as victims in the court cases—especially since the government’s theory of fraud rested on the unawareness of the third parties’ conduct violative of NCAA Rules:[7] In making payments to recruits and offering scholarship grants to universities,

The moment a player receives an impermissible payment/gift from a coach, agent, or executive, he becomes NCAA-ineligible.[9] The university then grants this player a scholarship and roster spot under the false and fraudulent pretense that he is NCAA-eligible. Overall, then, federal prosecutors rested their case on the premise that defendants here had defrauded universities by interfering with the “ability to control the use of their assets” now (in diverting scholarship money from eligible players) and in the future (in exposing them to future financial sanctions from the NCAA).[10]

But what of the schools whose coaches had no direct involvement in the case? For example, none of the basketball coaching staff at the University of Kansas were named as criminal defendants on any of the three federal prosecutions. The FBI investigation led to Kansas because of the Gatto trial, where testimony revealed that Gatto (on behalf of Adidas) had bribed prospective student-athletes and their families to commit to Adidas-sponsored athletic programs, after which they would retain Dawkins as agent when they played professionally.[11] Kansas coach Bill Self was brought into the case as part of Adidas defendants’ counterargument for the fraud defenses; he had exchanged text messages with TJ Gassnola that purportedly demonstrated the university’s awareness of Gassnola and Gatto’s payments to the recruits, undermining the government’s theory of fraud.[12] However, those documents were not admitted at trial because they did not bear on the mental culpability of the defendants or outweigh the privacy interests at hand.[13]

Now that all three criminal prosecutions are over and done with at the trial level and the NCAA has begun its own investigation into the implicated schools’ wrongdoing, there is much at stake for the athletic programs on whom the NCAA alleges Level 1 violations.[14] Penalties might range from show-cause orders against coaches identified in the allegation, especially if a head coach was identified, to postseason bans and scholarship reductions.[15] [AT1] [ES2] How ironic that, following a criminal case in which the theory of fraud rested on denying schools control over their assets, the NCAA may end up reducing the scholarship allocations—effectively denying the school of its control over assets. However, these consequences might feel a little unfair for schools without any direct criminal charges against them and for programs Gassnola testified to helping secure recruits but never disclosed to the coaching staff any financial compensation (what the prosecutors would call “bribery”).[16]

This seems particularly harsh for a school like the University of Kansas, whose position differs significantly from those of USC, Auburn, and Oklahoma State, because Kansas’ head coach, Bill Self, faced no criminal charges. Coaches Richardson, Person, Bland, and Evans all pleaded guilty to having accepted bribes from Adidas & others and served minimal sentences with none facing a period of incarceration longer than three months. The instigators themselves of the fraud scheme—Gatto, Code, and Dawkins—received sentences that felt more like slaps on the wrist considering the gravitas of a federal wire fraud conviction by jury.[17] On March 5, Kansas formally responded to NCAA’s Amended Notice of Allegations, challenging in the allegations issued on the men’s basketball program in their entirety.[18]

The NCAA enforcement staff, in its Amended Notice of Allegations (ANOA), advanced a “never before alleged theory” by which “every corporate sponsor and most, if not all, individuals associate with the sponsor are boosters of every institution with which the sponsor does business.”[19] As Kansas explains in its Response, the consequences for such a “theory” would be to effectively render countless student-athletes ineligible because of their “pre-enrollment participation” in events and competitions sponsored by brands like Nike and Adidas. Furthermore, this theory purports to penalize the universities who under the federal criminal code had been victims of wire fraud. How can the NCAA enforcement staff justify “holding [a] University responsible for the crime committed against it?”[20]

Gatto, Code, and Dawkins defrauded Kansas, along with (inter alia) University of Miami and the University of South Carolina – but none of those schools’ coaching staff were named defendants in any of the criminal cases.[21] Many scholars have questioned the propriety of adjudicating a private organization’s bylaws in federal court.[22] Even the Gatto trial court was carefulwhen admitting evidence about NCAA guidelines and rules, likely to prevent the jury from conflating criminal statutes with extra-legal regulations.[23] The “right to control” theory of fraud in particular is rife with controversy thanks to its apparent contravention from the federal courts’ tradition of prosecuting only those crimes and punishments that have been codified in statute.[24] Perhaps the federal government should have been more selective in its probe of a self-governing organization like the NCAA—an organization that faces enough criticism for its amateurism structure as it is, without the added publicity of a federal trial.

[2] Gatto, Code, and Dawkins filed an almost 150-page appeal with the U.S. Court of Appeals for the Second Circuit, arguing that no federal crimes were committed notwithstanding the possible violation of NCAA rules. See Mark Schlabach, 3 convicted in NCAA pay-for-play trial file appeal, ESPN(Aug. 13, 2019), https://www.espn.com/mens-college-basketball/story/_/id/27382222/3-convicted-ncaa-pay-play-trial-file-appeal.

[5] Gatto, Dawkins, and Code all pleaded not guilty and were convicted of attempt and conspiracy to commit wire fraud as well as wire fraud. See United States v. Gatto, 2019 WL 4194569 (S.D.N.Y. Sep. 3, 2019) (providing helpful background on the procedural history of this case but denying NCAA’s request for access to records relating thereto).

[7] See United States v. Gatto, 295 F. Supp. 3d 336, 342-43 (S.D.N.Y. 2018) (denying motion to dismiss indictment that made “abundantly clear that the . . . conspirators concealed the bribes from the universities ‘in order for the scheme to succeed and for student athletes to receive athletic scholarships,’ and that the universities stood to suffer substantial penalties [from the NCAA] if the payments were uncovered”).

[9] “An individual shall be ineligible for participation in an intercollegiate sport if he or she has entered into any kind of agreement to compete in professional athletics, either orally or in writing, regardless of the legal enforceability of that agreement.” Article 12.2.5 – Contracts & Compensation, NCAA Division I Manual 2019-2020, p. 71 (effective Aug. 1, 2019)  https://web3.ncaa.org/lsdbi/reports/getReport/90008.

[16] Will Hobson & Kevin Armstron, Why Bill Self’s texts with an Adidas official are a headache for Kansas Basketball, Wash. Post (Oct. 15, 2018), https://www.washingtonpost.com/sports/colleges/texts-between-kansass-bill-self-and-adidas-consultant-introduced-as-evidence/2018/10/15/29ace080-d0bd-11e8-83d6-291fcead2ab1_story.html.

[21] See Rebecca Davis O’Brien & Brian Costa, College Basketball Remains Largely Unchanged After Federal Corruption Trial, Wall St. J. (May 9, 2019), https://www.wsj.com/articles/college-basketball-remains-largely-unchanged-after-federal-corruption-trial-11557432889 (explaining how the University of Louisville—the only named victim of Code’s and Dawkins’ fraud and one of just three victims in Gatto’s fraud—fired head coach Rick Pitino shortly after charges were first brought; neither Pitino nor any other Louisville staff was charged criminally).

[22] “The payments are illicit only because the NCAA prohibits amateur athletes from making money from their talents and bars coaches from facilitating, and profiting from, meetings between agents and athletes.” Will Hobson and Jesse Dougherty, Is the FBI Cleaning Up College Basketball or Wasting Its Time? Wash. Post (Mar. 9, 2018), https://www.washingtonpost.com/sports/is-the-fbi-cleaning-up-college-basketball-or-wasting-its-time/2018/03/09/9a77a868-22a3-11e8-badd-7c9f29a55815_story.html (calling into doubt the validity of calling “bribes” what “would be considered signing bonuses and referral fees in other industries”).

[23] See Gatto, 2019 U.S. Dist. LEXIS 149914, at *36 (S.D.N.Y. Jan. 17, 2019) (the trial court had excluded expert testimony regarding “the frequency with which NCAA recruiting rules are violated or the extent to which any violations are detected,” additionally because “defendants’ showing was insufficient to justify admitting his testimony concerning the impact on Division I universities of the NCAA’s historical penalties where it has detected violations”).

[24] See Paul Tuchmann, From the Basketball Court to Federal Court: Perils of the Prosecutorial Approach to Wire Fraud in the NCAA Basketball Cases, Colum. Ctr. For the Advancement of Pub. Integrity (Mar. 2019), https://www.law.columbia.edu/sites/default/files/microsites/public-integrity/ncaa_wire_fraud.pdf

[AT1]This is a good place to insert your thesis. What do you think the penalty should be? Or is your thesis that Kansas should have never been involved at all?