From the Tennis Court to the Supreme Court: How Justice Ginsburg’s Legacy Extends into the Sports Realm 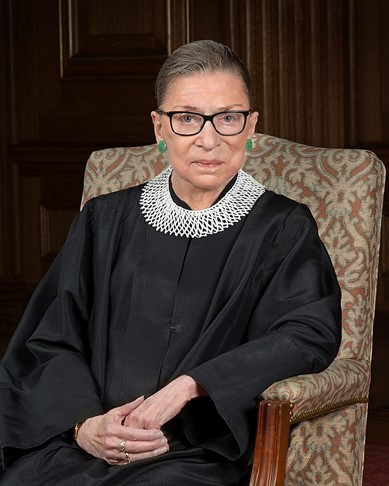 Despite her small stature, Justice Ruth Bader Ginsburg put up a strong fight.[1]  Perhaps most known for her contributions to gender equality and strongly worded dissents, Justice Ginsburg’s impact extends into the realm of sports.[2]   Ginsburg herself was an athlete and her workouts can be found in her trainer’s book “The RBG Workout: How She Stays Strong . . . and You Can Too!"[3]

Before the passage of Title IX which prohibited sex-based discrimination in schools receiving federal funding, and thus changing the way females are able to participate in school sports, Ruth Bader Ginsburg was fighting for women athletes.[4]  In 1972, a young woman named Abbe Seldin moved to Teaneck, New Jersey, where she wanted to play tennis for her school’s team.[5]  At the time, Teaneck High School had no tennis team for women and the New Jersey State Interscholastic Athletic Association (“NJSIAA”) prohibited female athletes from participating with male athletes in non-contact sports.[6]  Seldin, a nationally ranked tennis player, was determined to gain competitive experience before heading off to college.[7]  Hoping to find her spot on the tennis court, Seldin and her mother contacted the American Civil Liberties Union, where Rutgers Law professors Ruth Bader Ginsburg and Annamay Sheppard were volunteering at the time.[8]

Ginsburg and Sheppard quickly filed suit in the United States District Court for the District of New Jersey against various Teaneck officials, state agencies, Teaneck’s Men’s Tennis coach, and the head of the New Jersey State Interscholastic Athletic Association (NJSIAA), asserting that the rules prohibiting Seldin from playing tennis alongside men violated the Equal Protection Clause of the Fourteenth Amendment.[9]  During trial, District Court Judge Leonard I. Garth suggested that the dispute be settled in a different court—the tennis court.[10]  Judge Garth liked the idea of watching Seldin play several of the male athletes on the team to determine if Seldin was good enough to join.[11]  Eager to resolve the case, Judge Garth, a tennis player himself, said “I’ll take her on myself if I have to.”[12]

However, mid-trial, the NJSIAA altered its rules to allow female athletes to play several sports, including tennis.[13]  Seldin subsequently joined the Men’s Tennis team, where she endured extreme mistreatment by her coach and fellow teammates.[14]  While participating in a drill that required players to crawl up stairs on their hands while a teammate held their legs up, a male teammate abruptly dropped Seldin, causing her to fall onto her chest and injure herself.[15]  To escape the disrespect and mistreatment, Seldin quit before even playing a match.[16]  While Seldin’s personal victory in the courtroom was ephemeral, the victory allowed female athletes across the state to participate on some men’s sports teams for the very first time.[17]  Seldin, who went on to play tennis for Syracuse University and later professionally, praised Ginsburg, who taught her to “be tougher” and to ”stick up for myself for what is right.”[18]  In 1972, months after Ginsburg persuaded the NJSIAA to change their rules, Congress passed Title IX, which some have described as “[t]he legal springboard for women to gain an equal footing in sports in high schools and colleges . . . .”[19]

The same year she opened new doors for female athletes in the State of New Jersey, Ginsburg co-founded the Women’s Rights Project for the American Civil Liberties Union.[20]  Ginsburg went on to serve as general counsel for the ACLU until 1980, when President Jimmy Carter appointed her to the United States Court of Appeals for the District of Columbia Circuit.[21] Throughout her time with the ACLU, Ginsburg took on a plethora of sex discrimination cases—some even argued before the Supreme Court—and helped pave the way towards gender equality.[22]

Later, while sitting on the bench of the Supreme Court, Justice Ginsburg dissented in Ledbetter v Goodyear Tire,[23] where a female claimant filed an employment discrimination case under Title VII against her former employer after being paid significantly less than her male counterparts.[24]  While the majority of the Court concluded that Ms. Ledbetter’s claim was time-barred, Justice Ginsburg was not convinced.[25]  Her fierce dissent recognized problems with asserting unequal pay discrimination claims under Title VII, and her dissent ultimately opened the door to allow more women to bring unequal pay claims.[26]

In 2009, Congress passing the Lilly Ledbetter Act, which stated that claimant has 180 days after each discriminatory paycheck to file a claim.[27]  Armed with Justice Ginsburg’s legacy, female athletes today are fighting for equal pay on their own turf.[28]  The U.S. Women’s National Soccer Team and Ice Hockey Team, Venus and Serena Williams, and Big Wave Surfers have all spoken out about equal pay in sports.[29] Like Justice Ginsburg, these athletes recognize the harm caused by unequal pay on the basis of sex and are willing to fight for it.[30]

[9] See Andrew Keh, A Girl Wanted to Try Out for Boys’ Tennis. Ginsburg Helped Make It Happen., N.Y. TIMES (Sept. 23, 2020), https://www.nytimes.com/2020/09/23/sports/tennis/ruth-bader-ginsburg-tennis.html (“Ginsburg . . . and her colleague Annamay Sheppard quickly led the family to file a lawsuit in [the] United Stated District Court [for the District of New Jersey] in Newark, charging that the rules barring girls from competing alongside boys violated the equal protection clause of the 14th Amendment.”). Ginsburg took a broad approach with the suit, naming various parties as defendants. See id. (including head of NJSIAA, Teaneck school officials, state agencies, and Teaneck’s tennis coach).

[10] See Kelly, supra note 4 (“Finally, U.S. District Judge Leonard I. Garth said he wanted to settle the dispute in a different venue: on the tennis court.”).

[17] See Keh, supra note 9 (“But though the result immediately opened new doors for young female athletes across the state, the payoff for Seldin herself was short-lived.”).

[25] See generally id. at 643-60 (showing Justice Ginsburg was not convinced by majority opinion).

[29] See generally id. (listing athletes who have taken stance in fight for equal pay in sports).

[31] For further discussion on how Ginsburg’s impact has stretched across the globe, see infra note 32 and accompanying text.

[33] For further discussion of how Ginsburg’s legacy has extended beyond the courtroom, see supra notes 1-32 and accompanying text.