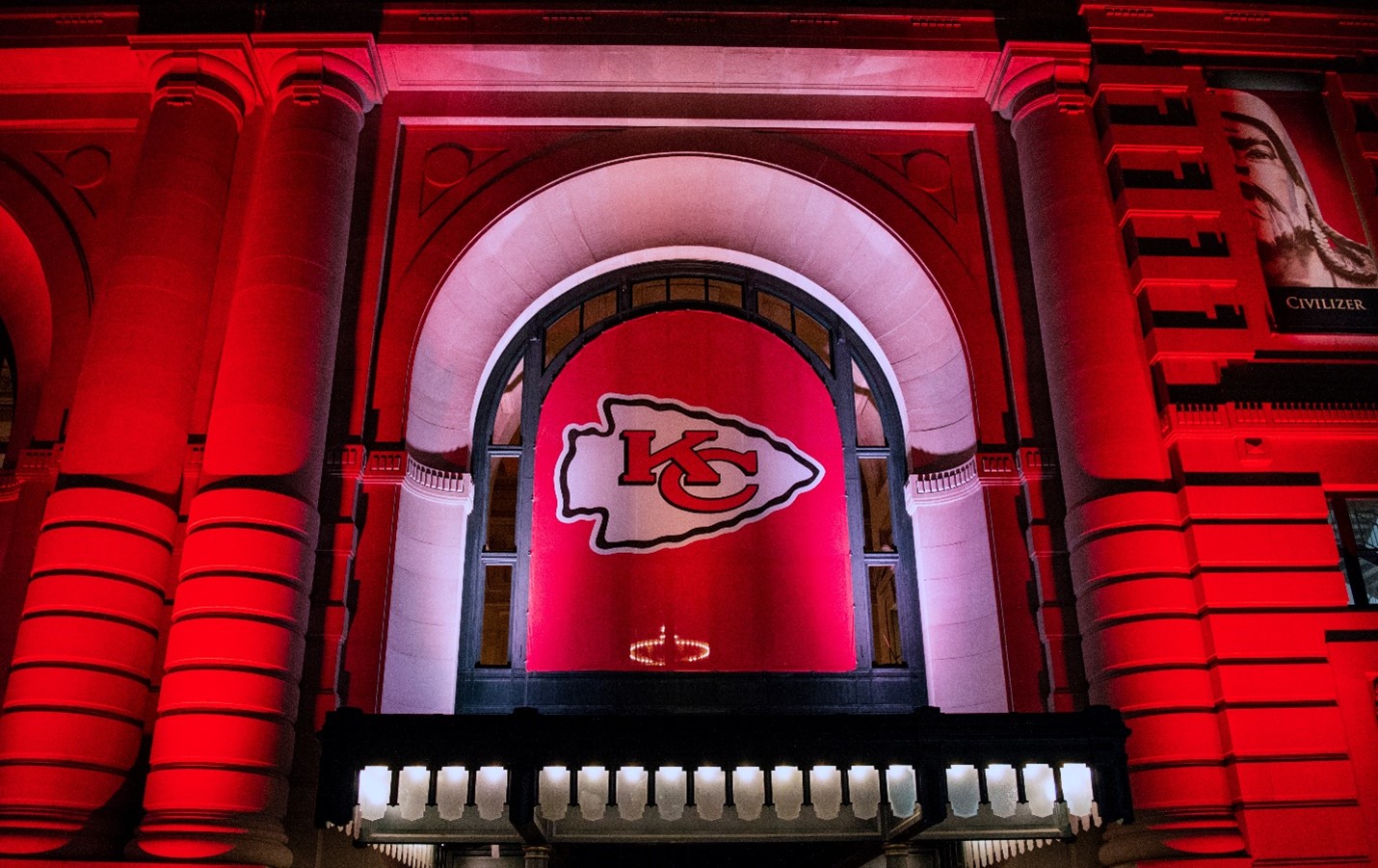 As a result of these discussions, the Chiefs declared its new policy prohibiting fans from wearing headdresses or face paint that “in any way references or appropriates American Indian cultures and traditions” within Arrowhead Stadium.[3]  This represents an extension of the Chiefs’ prior policy of discouraging such expression as well as discouraging broadcasters from panning cameras on fans who engaged in such expression.[4]  Another past practice that will be sidelined is the Arrowhead Chop, a pregame tradition involving a fan or former Chiefs player banging a large drum, during which fans in the stands raise and lower their arms in the fashion of throwing a tomahawk while chanting.[5]

Not the First, and (Likely) Not the Last

Professional sports teams have recently undergone several transformations in response to disapproval from Native American activists, civil rights organizations, and sports organizations like the NCAA.[6]  Indeed, some have described the Washington Redskins’ actions as setting off a domino effect.[7]  “[I]n light of recent events around our country and feedback from our community,” the Washington Redskins undertook measures to comprehensively review its Native American depictions especially in its organization’s name.[8]  The Cleveland Indians have also expressed their intent to discuss similar issues with Native American groups, including changing its name.[9]  Even the President of the Anti-Defamation League has joined the fray, urging teams to reconsider their portrayals of Native Americans.[10]

The movement to remove offensive references to Native Americans has extended beyond just various sports and civil rights organizations.[11]  In 2019, the State of Maine’s Governor signed a bill prohibiting all public schools, including colleges and universities, from “hav[ing] or adopt[ing] a name, symbol or image that depicts or refers to a Native American tribe, individual, custom or tradition and that is used as a mascot, nickname, logo, letterhead or team name of the school.”[12]  Additionally, in 2005, the NCAA prohibited the use of “hostile or abusive” representations of Native Americans during its postseason championships.[13]  Since then, ten NCAA teams have changed team or logo references to Native Americans, “three kept their nicknames but stopped using them to represent Native Americans,” and five maintained their team names or mascots upon receiving approval from their local tribes.[14]

Historically, most attempts by professional sports teams, state governments, and Native American activist groups to remove offensive references to Native Americans on logos or as mascots have been successful.[15]  None raised First Amendment issues; for example, the NCAA’s policy only applied to member schools and student athletes, while the Maine statute applied to schools who received direct funding from the state.[16]  Here, however, the Chiefs’ new policy does not apply to subsidiaries, it applies only to fans entering the stadium and to a specific content of speech: headdresses and face paint “styled in any way [that] references or appropriates American Indian cultures and traditions.”[17]

Some have argued that stadiums must respect fans’ free speech rights.[18]  Generally, in order for the First Amendment to apply with force against a particular entity, that entity must be a state actor and constitute one of three different forums that each present varying degrees of restrictions on regulating speech.[19]

According to a recent ruling by the Supreme Court of Missouri, such a partnership existed between the Chiefs and the government.[23]  The sports complex is a political subdivision of Jackson County, which, in turn, is a political subdivision of Missouri.[24]  When Arrowhead Stadium was to be renovated in 2006, the Missouri Development Finance Board agreed to issue tax credits to project donations as well as provide its own donations to the project.[25]  A symbiotic relationship would most likely be found between the Chiefs and the sports complex authority due to Finance Board’s “finding that the project provided substantial economic benefits to Kansas City, Jackson County, and the entire State” as well as, of course, the Chiefs.[26]  Therefore, a court considering a challenge against the Chiefs’ policy would almost certainly define the Chiefs as a state actor, thereby subjecting it to the commands of the First Amendment.[27]

Since the Chiefs are most likely considered state actors, the next issue to consider is Arrowhead Stadium’s classification as a specific type of forum.[28]  There are three distinct forums: public, limited public, and nonpublic.[29]  Sidewalks and parks are considered “quintessential public forums” where even content-based regulations must withstand strict scrutiny to survive.[30]  In limited public forums, where the government has opened a forum for speech about particular content, it may not impose further speech restrictions.[31]  Nonpublic forums allow the government to regulate speech content, so long as the regulations are “reasonable in light of the purpose served by the forum and are viewpoint neutral.”[32]  Considering that sports stadiums, in general, and Arrowhead Stadium, specifically, not only provide a forum for fan expression, but encourage it, the Kansas City Chiefs’ will likely constitute a limited public forum.[33]

If a court were to consider the Kansas City Chiefs as a state actor and its stadium a limited public forum, the Chiefs would have to comport with the First Amendment.[34]  Accordingly, its policy must withstand strict scrutiny.[35]  While there is a strong government interest in preventing discrimination along demographic lines, it is questionable whether the Chiefs will be able to assert that infringing upon fans’ right to free speech is the least restrictive means of achieving that interest.[36]  Furthermore, the policy is arguably overbroad as it prohibits face paint that “in any way references or appropriates American Indian cultures and traditions.”[37]  Several questions remain that undermine the narrowly-tailored requirement:  Are Native American fans also prohibited from entering the stadium if wearing face paint or a headdress?  What if fans intend on wearing non-Native American-styled face paint, are determined anyway to have referenced Native American culture in “any way?”

While the Chiefs have taken a large, courageous step forward, restricting fan expression and crafting a potentially overbroad policy might be grounds for a legal challenge, potentially subjecting them to a 15-yard penalty and automatic first down for the other side, involving plenty of legal fees and invalidation of their laudable policy.

[7] See Adam Kilgore & Roman Stubbs, To Native American Groups, Redskins Name is ‘Worst Offender.’ Now They Hope for More Changes, Wash. Post (July 9, 2020), https://www.washingtonpost.com/sports/2020/07/09/native-american-groups-redskins-name-change-indians-braves-blackhawks/ (“Is Washington’s imminent name change a singular spasm or an earthquake that leads to a series of tremors? One major development supports the latter. That same day, less than 12 hours after Washington’s declaration, baseball’s Cleveland Indians announced they would ‘determine the best path forward’ for their 105-year old name.’”).

[16] See id. (describing NCAA’s policy as prohibiting display of such references to Native Americans on uniforms and within school when school hosted championship game); see also tit. 20-A, § 12 (prohibiting use of or reference to any Native American individual, tribe, or custom as logo, mascot, or team name in any Maine public school).

[19] See DeSiato, supra note 18, at 416 (requiring showing of entity being a state actor and then determining level of First Amendment restriction based on entity’s forum designation).

[20] See id. at 417 (“[C]ourts are most willing to find state action where a private professional club plays its home games in government-owned facilities if the court utilizes the symbiotic relationship test.”).

[22] See Shire, supra note 18, at 89-90 (“[A] publicly funded arena … needs more than a lease with the city to satisfy the symbiotic relationship test; it needs a more unified relationship to exist.”).

[25] See id. at 815-16 (noting Chiefs’ proposal for Missouri Development Finance Board to issue tax credits and Finance Board’s agreement on that proposal).

[26] Id. at 816 (emphasizing Finance Board’s agreement to offering tax credits as predicated on believing on a mutually beneficial arrangement with Chiefs).

[27] See DeSiato, supra note 18, at 416 (“In order to invoke [First Amendment] protection, the private entity’s actions, in most cases, must qualify as public under the ‘state actor’ requirement.”).

[35] See Perry, 460 U.S. at 45 (“For the State to enforce a content-based exclusion it must show that its regulation is necessary to serve a compelling state interest and that it is narrowly drawn to achieve that end.”).

[37] Statement, supra note 1 (discussing policy regarding use of headdress and face paint).