An Open Letter to the NFL: “Let the Play Continue” and Change the Standard of Review 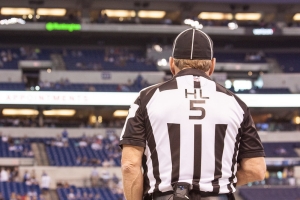 Watching the Dallas Cowboys versus the Minnesota Vikings on Sunday, November 10 made me realize that the NFL needs to immediately tweak its replay rules.  In the first half, Vikings Quarterback Kirk Cousins dropped back to throw.  As he was about to release the ball, his arm was knocked by a Cowboys defensive lineman and the ball vaulted forward. The Cowboys picked up the ball and returned it for a Touchdown.  The referees ruled on the field that Cousins fumbled and the Cowboys scored a touchdown.  Watching live, however, it was quite clear that Cousins’ arm was moving forward and the pass should have been ruled incomplete.  But rather than blow the play dead, the officials—correctly—kept their whistles in their pockets and allowed the “play to continue” to its end.[1]  And that makes a lot of sense.  If referees blow the play dead on ambiguous fumble calls, then they cut off any further developments—such as a touchdown return.  But, if they allow the play to continue, as they did in the Vikings game, they can correct any mistakes on review, which is exactly what they did.  On review, it was perfectly clear that Cousins’ arm was moving forward, so the referees were able to reverse the call and ruled that it was an incomplete pass.

This scenario highlights two related rules changes that the NFL needs to address: (1) making it official policy for referees to allow “the play to continue” and (2) the appropriate standard of review on replay when referees do so.

With just under four minutes remaining in the game, the Titans — up by four points at the time — lined up for a field goal that would have pushed the lead to seven.  Instead of going with the kick, the Titans went with a fake that was sniffed out by the Bucs defense.

Punter Brett Kern took the snap and tried to pick up the first down, but he was lit up by Devin White and clearly lost possession of the ball before touching the ground.  The Bucs’ Andrew Adams picked up the loose ball and returned it to the end zone.[2]

Unfortunately for the Bucs, the refs blew the play dead, ruling Kern down by contact.  And that was that.  The Touchdown was negated, and no instant replay review could cure it. As Andrew Joseph of USA Today noted, “By not even letting the play unfold, the officials took away the ability to get the call right after a possible review.  Had [the Cardinals coach] challenged the play, the best the Bucs could have gotten was a clear recovery from the spot of the fumble — not even worth doing because the Bucs took over from that spot on a turnover on downs anyway.”[3]

Because of plays like this, the NFL seemingly encourages referees to hold their whistles and “let the play continue.”[4]  But the NFL should not to leave it to chance.  Instead, the NFL should make it official policy to allow plays to continue to their natural end in all plays where there is the potential to cutoff further developments.

And that brings us to the second issue: changing the standard of review on replay in the “let the play continue” situations.  To illustrate, what if the Cousins incomplete pass described above was a much closer call, but still likely an incomplete pass?  In that scenario, the rules would have required the referees to stick with the call on the field, even if they believed it was wrong.

When a play is reviewed, referees must let the ruling on the field stand unless “clear and obvious visual evidence warrants a change.”[5]  Perhaps unknown to many, the instant replay review process largely mirrors legal proceedings.  In legal jargon, the “clear and obvious” language is known as the “standard of review.”  The standard of review instructs appellate courts, also known as reviewing courts, how much deference they should give to the ruling of a trial court when the case comes up on appeal.  Depending on the type of issue being reviewed—typically legal or factual—the reviewing court will afford the trial court’s ruling more or less deference.  In pure questions of law, the standard of review is “de novo,” which means that the reviewing court is required to afford no deference to the trial court.[6]  The appellate court reviews the legal question anew as if the trial court did not even make a ruling.[7]  The case is drastically different when questions of fact are being reviewed.  Facts are determined by evaluating testimony and weighing the credibility of witnesses, including by reading body language and other non-verbal communication.  Judges and juries—the factfinders—are in a much better position than an appellate court to ascertain the facts given that they observe the evidence firsthand.  Given this reality, reviewing courts generally review factual issues under a standard of review known as “clear error.”[8]  This standard is highly deferential and requires a “definite and firm conviction that a mistake has been committed.”[9]

Sound familiar?  The NFL’s “clear and obvious” standard functions almost exactly like the standard of review that an appellate court applies to the factual findings of a judge or jury. Only when the reviewing officials can unambiguously say that an error on the field was made can they overturn a call; in close calls, they must defer to the ruling on the field, even if the reviewing referee thinks the on-the-field ruling was wrong.[10]  And this makes sense.  The referees on the field see the play up close and in person.  Deferring to the ruling on the field also ensures the integrity of the game by affirming that the officials—rather than video replay—serve as the true “judges” of the rules.

But here is the problem.  The rationale behind the “clear and obvious” standard—deferring to the person most closely situated to the evidence—does not apply if the referees on the field are not making a ruling based on what they see on the field!  In the “let-the-play continue” scenario, the referees are often intentionally not “ruling” what they believe to be correct.  Instead, to ensure that they do not commit a grave error—like blowing the play dead and preventing a fumble return—they allow the play to continue even though they believe the play should be dead because it was an incomplete pass, the runner was down by contact, forward progress was stopped, etc.  Accordingly, why should the rules give deference to a ruling that was intentionally made wrong?  Yet that is what effectively takes place in the “let the play continue” scenarios.

To put it another way, when referees “let the play continue” they really are not making a ruling at all.  Instead, they allow the play to happen so they can later review the entire play.  In these instances, then, the reviewing referee is really acting as the trial court, that is, the court of “first instance.”  The reviewing referee is the first one actually weighing the evidence and seeking to make a correct ruling based on the facts presented (the video replay).  Accordingly, in the let-the-play-continue scenario, the replay review should be treated as the first ruling.

For these reasons, the NFL should make two rule changes.  First, the NFL should make clear that officials are encouraged to allow ambiguous plays to continue to their end, rather than blowing the play dead.  Second, and only in these scenarios, the NFL should change the standard of review from “clear and obvious” to de novo.  This standard will give referees the freedom to make whatever ruling makes sense based on the video replay, regardless of what “ruling” was made on the field.

To reiterate, why would the NFL give any deference to rulings that were intentionally made against the beliefs of the referees and really are not “rulings” at all?  To ask is to answer.  And this is not just a hypothetical divorced from reality in law-professor world.  It is only a matter of time before this will cost a team a game.  The referees will correctly let the play continue, despite their being good evidence of, say, an incomplete pass, but not be able to overturn the call on review because of the high bar set by the clear and obvious standard.  With all the issues surrounding NFL refereeing, let’s get the rules right to ensure that video replay review best serves the interests of the game.

[4] I say “seemingly” because I found no official statement from the NFL that such a policy exists.  Nonetheless, writers and commentators allude to the existence of such a policy.  If such a policy does not exist, the NFL should make it a point of emphasis and train all officials accordingly. Not only will an official policy ensure that legitimate plays are not prematurely cut off, it will also promote fairness and player safety. Without consistency, players are often left wondering whether a play is dead or alive, leaving them vulnerable to potential injury and the situation where some players stop playing on legitimate plays.

[8] See generally Fed. R. Civ. P. 52(a)(6) (“Findings of fact, whether based on oral or other evidence, must not be set aside unless clearly erroneous, and the reviewing court must give due regard to the trial court's opportunity to judge the witnesses' credibility.”).

[10] See Anderson v. Bessemer City, N.C., 470 U.S. 564, 573–74 (1985) (“This standard plainly does not entitle a reviewing court to reverse the finding of the trier of fact simply because it is convinced that it would have decided the case differently. . . . If the district court's account of the evidence is plausible in light of the record viewed in its entirety, the court of appeals may not reverse it even though convinced that had it been sitting as the trier of fact, it would have weighed the evidence differently.  Where there are two permissible views of the evidence, the factfinder's choice between them cannot be clearly erroneous.”).