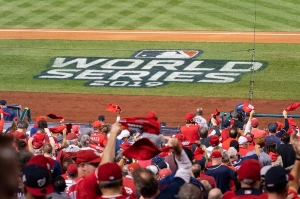 On October 19, 2019, the Houston Astros clinched the American League Championship and advanced to the World Series.[1] The major news following this big win, however, was not about the game at all; rather, the biggest story was about the conduct of the Assistant General Manager, Brandon Taubman, in the locker room following the game.[2] In an article penned by Sports Illustrated writer, Stephanie Apstein, it was reported that Taubman repeatedly shouted at three female reporters “Thank God we got Osuna! I’m so f***ing glad we got Osuna!”[3] Taubman’s remarks refer to the Astros’ acquisition of Roberto Osuna from July of 2018.[4] However, in the October 19 game, Osuna was not a star player, giving up a two-run homerun in the ninth inning.[5] Rather, Taubman’s comments seemed to reference the reason the Astros were able to so easily pick up Osuna, one of the best closers at the time.[6]

Osuna was traded for a low price to the Astros from the Toronto Blue Jays after he allegedly assaulted the mother of his child in May of 2018.[7] Charges were dropped after the woman returned to Mexico and refused to testify.[8] Osuna was suspended by Major League Baseball (“MLB”) for seventy-five games.[9] In order to generate some goodwill following the acquisition, the Astros donated over two hundred thousand dollars to various shelters and emphasized their “zero-tolerance policy” towards domestic violence.[10]

Following Apstein’s article, the Astros immediately released a statement accusing her of fabricating the story.[11] Sports Illustrated came out and said that it completely stood behind Apstein and noted that her story was corroborated by both the Houston Chronicle and Yahoo! Sports.[12] The Chronicle even added that Taubman was standing with a few men and holding a cigar at the time he shouted at the female reporters, who were about eight feet away and visibly shaken.[13] Notably, the Astros’ statement did not deny Taubman’s comments but rather noted that he was “supporting the player during a difficult time.”[14]

On October 22, Taubman did release a statement stating he was “sorry if anyone was offended by [his] actions.”[15] Astros owner, Jim Crane, released a statement as well emphasizing that mandatory training regarding domestic violence is required annually from all employees.[16] On this same day, the MLB chose to investigate the situation by interviewing those involved.[17] By October 24, the Astros fired Brandon Taubman after finding that his comments were in fact directed at one or more of the reporters.[18]

Under the MLB’s Constitution, the Commissioner has full authority to investigate upon his own initiative any activity that is “alleged or suspected to be not in the best interest of . . .  [b]aseball.”[19] Taubman’s clear taunt at the female reporters is harmful to the League’s image.[20] Also vested in the Commissioner through the Major League Constitution is the power to decide what “preventative, remedial, or punitive action” to take against an individual or a club.[21] This means that Manfred, the current MLB Commissioner, could choose to fine Taubman, suspend Taubman, or even fine the Astros.[22] Additionally, Manfred could choose to fine the Astros organization due to improper supervision of Taubman or even because of the statement released by the organization accusing Apstein of fabricating the story.[23] Even though the Astros have fired Taubman, it is still very possible, and likely, according to ESPN’s sources, that Taubman will be suspended by the League if he gets another job in baseball.[24] Finally, the MLB Constitution does provide that the Commissioner has the authority to “pursue legal remedies” or propose remedial legislation.[25]

Another way in which the MLB can punish those involved in this situation is through the MLB’s Workplace Code of Conduct.[26] This code states that “harassment . . .  [is] against the MLB’s values and will not be tolerated anywhere in the Major or Minor Leagues.”[27] Within the code, Taubman’s inappropriate conduct could arguably be considered bullying, which is defined as “abusive or intimidating behavior” based on a variety of factors including gender or gender norms.[28]

Manfred can also fine or suspend Taubman under the MLB’s Regulation for Club/Media Relations.[29] This agreement, released in 2016, prohibits employees from discriminating against any media members.[30] Additionally, club employees are prohibited from directing threats to the media.[31] Violations for players or executives are punishable by fine or suspension.[32] The Astros can also be punished under this agreement, should it be found that Taubman’s comments created a hostile work environment.[33]

Finally, Taubman could easily be punished for his inappropriate comments through the MLB’s Joint Domestic Violence, Sexual Assault and Child Abuse Policy.[34] This policy “takes an absolute stand against domestic violence” and “focuses on education and prevention.”[35] Domestic violence is defined as “emotional and/or psychological intimidation, verbal violence,… [or] harassment.”[36] It has been argued that Taubman’s comments could be perceived as intimidation or harassment.[37] While the policy was originally worded as applying to players, the MLB did ensure that the policy applied to everyone employed at the various clubs.[38] In fact, should Taubman be fined or suspended under this policy he would not be the first executive to be punished for violations.[39] The CEO of the San Francisco Giants was suspended without pay and required to go to counseling after he grabbed his wife’s arm in public and she fell.[40] If the MLB found Taubman’s comments to be harassing or intimidating, Taubman could face suspension from the League; this suspension would only be enforced should he end up working for another baseball team.[41] The Astros might face punishment, and most likely fines, if it is thought that their conduct has undermined the MLB’s continued commitment to taking a stand against domestic violence.[42]

[3] See id. (detailing comments made by Taubman towards three female reporters, one of whom was wearing domestic violence awareness bracelet).

[14] Sports Illustrated Staff, supra note 11 (observing statement released by Astros did not deny that Taubman made comments about Osuna).

[21] Major League Baseball, supra note 19 (granting in MLB Commissioner power to decide what punishment to enforce against club or individual).

[23] See id. (hypothesizing theories under which Commissioner could impose punishments on Houston Astros).

[24] See Jeff Passan, Inside the Astros culture that bred Brandon Taubman’s comments, ESPN (Oct. 25, 2019) https://www.espn.com/mlb/story/_/id/27926780/the-houston-astros-front-office-missteps-began-long-brandon-taubman-comments (reporting sources have indicated that Taubman will receive suspension from MLB that will go into effect should he ever take another job in baseball).

[29] See Gartland, supra note 17 (acknowledging MLB’s Regulation for Club/Media Relations as another avenue for Manfred to enforce punishment against Taubman).

[34] See id. (noting MLB and MBLPA’s joint policy on domestic violence is applicable to Taubman’s comments and therefore can be invoked).

[38] See id. (recognizing that original language of policy was directed towards players but later was broadened to include everyone employed within MLB).

[42] See id. (observing that if Astros are perceived as undermining MLB’s commitment to prevention of domestic violence, then MLB could impose fines).