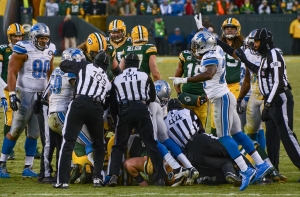 Former Heisman Trophy winner, Desmond Howard, recently proclaimed that National Football League (NFL) referees need to be “investigated.”[1]  Howard tweeted his frustrations over calls made during the Lions-Packers Monday Night Football game on October 14th, where referees called a roughness penalty and an illegal contact penalty.[2]  Howard is not the only one frustrated with recent calls; viewers have been critical of NFL referees after some questionable gameday calls.[3]  Public criticism of  NFL calls is not new, but advances in technology have only intensified the urgency to get calls right.[4]  While NFL officials can face discipline, it does not happen often.[5]  The public is demanding answers for these poor calls, and they are unlikely to be satisfied without future change.[6]

In 1938, a new four-person referee system was created, and each was assigned to a dedicated position.[7]  This allowed for a specialist at each position on the field.[8]  Additionally, the first “play situation book” was introduced to the NFL -- a guide to prepare officials for every scenario during a game.[9]  The league continues to use this book today.[10]  While those basic practices set the groundwork, technology continued to evolve creating a more complex game experience.[11]  By 1975, referees were equipped with wireless microphones.[12]  Once fans were able to hear calls live, the credibility of referees increased with on-field rulings, creating a sense of greater transparency.[13]  Following this, instant replay was also instituted, allowing spectators multiple chances to form their own opinions about calls.[14]  Instant replay also created pressure on the NFL to find a way to use technology in order to help officials make the correct calls.[15]

With sixteen million fans tuning in for regular season games, technology used by the NFL has created a sense of urgency to get the calls right.[16]  Yet, interestingly, the NFL did not fire a referee for performance reasons during “the Super Bowl era” until 2018.[17]  Referee Cruz was the first NFL official in the last fifty years to be fired for performance reasons.[18]  Therefore, while technology continues to evolve and create new opportunities for review, major disciplinary action has not necessarily increased.[19]

Criticism over referee calls is not new.[20] Yet, voices have grown louder in recent years for the NFL.[21] Much of the criticism stems from how NFL referees are currently being regulated, which is governed by the 2019 NFL Rulebook.[22]  The Rulebook states that a dispute or call for interpretation will be decided by the Commissioner.[23]  Further, the Officiating Department can review television footage and coaches’ tapes in order to evaluate officials’ conduct.[24]

As of 2018, a typical NFL game averaged 154 plays, and that number is only increasing.[25]  More plays means a higher chance for calls to be reviewed or contested.[26]  However, only about thirty-seven percent of on-field calls have been overturned since 1999.[27]  One way a call can be overturned is if a player himself protests a ruling.[28]  The player can schedule a hearing with the NFL and his case will be assigned to an officer.[29]  The officer will review the play and hear from both sides, however the officer’s decision is final and binding.[30]  To ensure this doesn’t happen often, NFL officials are constantly being evaluated by the league and given a grade based on the evaluation system.[31]  Though it is generally uncommon for referees to receive harsh discipline, the more frequent discipline is by way of suspension during the season.[32]

The evaluation system includes two clinics during offseason.[33] The first clinic focuses on new rules, physical assessments, and administrative changes.[34]  The second focuses on written exams, and testing an official’s knowledge of the rules.[35]  During the season, officials also spend hours each week breaking down videos and getting ready for the next game.[36]  Officials also receive a review of their previous game calls and must discuss them with supervisors, after which officials  must watch any training videos necessary to clarify specific calls.[37]

Being an NFL official is not an easy job, the game of football moves rapidly and there are going to be mistakes of human error from time to time.[38]  However, much of public outcry involves speculation that the NFL unreasonably protects officials and is not candid regarding bad calls.[39]  In the search to rectify this issue, some have supported the ideas of a “sky judge” working in the booth who has the benefit of replays and can help to fix mistakes in real time.[40]  Others, call for a reboot of officiating protocols.[41]  Another common suggestion pertains to hiring a designated person to serve as a spokesperson for officiating who can speak quickly and candidly about bad calls.[42]

It seems whatever the remedy, public outcry is more interested in better regulation of referees that just “let’s the players play.”[43]  Recent uproar over the aftermath of the Lions-Packers game shows how important it is for the league to have someone designated and knowledgeable to speak on behalf of the referees; someone employed by the NFL that spectators can turn to when calls are well, really bad.[44]  It is fair to want officials held to the same standard as players and coaches, who routinely lose their jobs when they fall short on the field, but does not mean the same process is possible.[45]  The NFL can begin by looking inward, continuously updating the evaluation system and focusing on intensive referee training.[46]

[7]See NFL Operations, The Pursuit of Perfection: The History and Evolution  of the Official, NFL, https://operations.nfl.com/the-officials/history-of-the-official/ (last visited Oct. 29, 2019) [hereinafter NFL Operations I] (providing background history on officials in the NFL).

[9]See id. (highlighting importance of designating specialist at each position).

[10]See id. (stating that this practice is still in use today).

[11]See id. (depicting importance of technology in history of NFL).

[12]See id. (demonstrating how wireless microphones impacted football, by allowing officials to reach much wider audience and get sense of officials’ personalities for first time).

[18]See Kevin Seifert, The NFL fires an official and opens Pandora’s box. What’s next?, ESPN (Oct. 26, 2018), https://www.espn.com/blog/nflnation/post/_/id/285502/the-perception-and-reality-behind-nfls-in-season-official-firing (arguing that precedent has been set because referee was fired).

[19]See Darryl Slater, Are NFL refs on the take? Former Heisman winner (and current ESPN analyst) wants officials investigated- and he’s not the only one, NJ.com (Oct. 15, 2019), https://www.nj.com/jets/2019/10/former-heisman-winner-and-espn-analyst-wants-nfl-refs-investigated-after-latest-fiasco-and-hes-not-the-only-one.html (stating that NFL officials do not really face discipline often unless they “really” screw up).

[21]See id. (citing many of the most notorious “worst calls,” many of which have occurred in last several years).

[23]See id. (stating rules for when calls are in question).

[26]See id. (stating number of plays has increased, therefore there is greater chance of error).

[27]See id. (providing data which demonstrates that majority of calls are not overturned).

[30]See id. (laying down rules for hearing process including finality of initial decision).

[31]See Ty Schalter, How Are NFL Refs Held Accountable for Their Performance?, Bleacher Report (Nov. 27, 2013), https://bleacherreport.com/articles/1867480-how-are-nfl-refs-held-accountable-for-their-performance (explaining evaluation system, which incentivizes officials to make good calls because for example, those who earn highest grades are selected to work Super Bowl).

[33] See NFL Operations III, supra note 27 (explaining how evaluation system works and what education is provided for officials in off-season).

[35]See id. (stating that written exams are taken in order to hold officials to high standard).

[37]See id. (demonstrating that supervisors also must review officials calls and have regular meetings with officials to ensure calls are not only proper, but also continuously improving).

[40]See Michael Rand, Criticism of NFL referees reaches new levels after Packers steal win, StarTribune (Oct. 15, 2019), http://www.startribune.com/criticism-of-nfl-referees-reaches-new-levels-after-packers-steal-win/563133492/ (providing one solution for officiating, but also recognizing negatives to that solution such as bogging down game even more).

[41]See id. (explaining another popular solution some have advocated for, particularly in terms of penalty protocol).

[42]See Florio, supra note 39 (offering another solution in which spokesperson would be available to face tough questions and admit when mistakes were made).

[43]See Rand, supra note 40 (featuring several commenters who feel that viewers greatest interest is in being able to watch game and not be bogged down by poor calls).

[45]See John Feinstein, Bill Vinovich Is Either Irresponsible Or a Liar, CBS Sports Radio (Jan. 23, 2019), https://cbssportsradio.radio.com/articles/john-feinstein-referees-need-be-held-accountable-bill-vinovich-liar (pointing out that officials need to be held accountable, but conceding that process will never be identical to coaches or players).