Don’t Test Your Luck! Why Colts Fans Should Not Sue Over Ticket Refunds 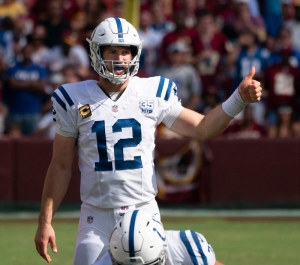 Andrew Luck, four-time pro bowl quarterback, number one all round draft pick, and face of the Indianapolis Colts organization, suddenly retired on August 24, 2019 at the age of twenty-nine.[1]  During his time in the league, Luck sustained several severe injuries including torn cartilage in his ribs, a partially torn abdomen, a lacerated kidney, a torn labrum, a mysterious calf/ ankle issue, and at least one, documented, concussion.[2]  When announcing his retirement, Luck expressed that these injuries have placed him in an endless cycle of pain, and he needed to remove himself from football.[3]

During a Colts preseason game, one day before Luck intended to make a formal retirement announcement, news of his pending retirement broke.[4]  Fan reactions to this breaking news were swift and impassioned, with many booing him as he left the game.[5]  Even further, some fans have threatened to seek legal recourse, demanding refunds for their tickets and threatening to sue if the Colts do not comply.[6]

Luckily for the Colts, Fans Do Not Have a Winning Argument

There are a few potential arguments Colt’s ticket holders may make if they choose to take legal action against the Colts organization.[7]  First, ticket holders may argue that the Colts made Luck a critical part of the marketing efforts in the leadup to the 2019 season, and the Colts gave no warning or indication that Luck would retire.[8] Fans were aware he had been rehabbing an injury, however Luck and the Colts continued to indicate he would return to play.[9] Additionally, the timing of Luck’s retirement is unusual for a franchise quarterback.[10] Luck retired after many tickets had already sold, even though a franchise quarterback would typically have been expected to retire well before the start of a new season, leaving the organization time to regroup.[11]  Finally, fans could argue that the Colts violated Indiana law and engaged in deceptive trade practices by using Luck as a major marketing tool.[12] Each of these potential arguments boils down to one element, that fans purchased their tickets under the belief that Luck would be the quarterback for the upcoming season, and therefore, were misled and are entitled to a refund.[13]

Demands for a refund will however, not succeed.[14]  This is primarily due to the nature of professional sports and the potential for athletes to suffer an injury or retire at any time.[15]  When a party purchases a ticket to a game, they are purchasing the right to watch a particular game from a particular seat.[16] There are no guarantees that specific players will be on the field, only that certain teams will be competing.[17]

Additionally, the claim may be difficult because fans would have to prove that the Colts organization knew of Lucks retirement but chose to put him forward in their major marketing effort.[18]  This may be difficult as preliminarily the Colts organization appears to be as shocked as many fans are by this announcement.[19]  Finally, if courts allow this type of litigation, it will open the doors to countless suits as a result of player injury, illness or retirement.[20]

It is for these reasons that Colts ticket holders would likely be unsuccessful and why previous litigation brought by ticket holders has been unsuccessful.[21] There have been two historic cases in which fans have unsuccessfully attempted to sue teams and organizations.[22] In the first, a New York Jets ticket purchaser unsuccessfully sued the New England Patriots for a refund.[23]  In his claim, he stated that because the Patriots unfairly filmed the Jets coaches, he had witnessed a fraudulent game.[24]

In the second, a Miami Heat ticket holder sued the San Antonio Spurs after the Spurs head coach played his bench players instead of the Spurs normal starters.[25]  The plaintiff argued that the game had been marketed as a match-up between top teams and therefore he had been a victim to deceptive practices.[26]  In each case, plaintiffs were unsuccessful.[27] This is because they had been provided the service guaranteed by the ticket, which was the opportunity to watch the Jets play the Patriots and the Heat play the Spurs.[28] With history, precedent and logic on their side, the Colts organization should not fret over the disgruntled fans and their potential claims.[29]

Goodbye and Good Luck: Leaving the League is Becoming a Trend

The decision for Luck to walk away, while seemingly in his prime, is unusual for such a high-profile quarterback.[30] Luck however is not the first player to make such a move and appears to be a part of a growing trend.[31]  In 2014, former Steelers running back Rashard Mendenhall retired at twenty-six, stating “I no longer wish to put my body at risk for the sake of entertainment.”[32]  Chris Borland, former 49ers linebacker retired in 2015 after his rookie year, citing concerns of recurrent concussions.[33]  And in 2019, former New England Patriot Rob Gronkowski made public the toll football has taken on his body while reflecting upon his retirement.[34]

Despite the fan blowback, many in the NFL have praised Luck and expressed their disappointment in the fans and reporters who have criticized him.[35]  Colt’s receiver Chester Rogers believes Luck’s sentiments are not unusual and stated that “ . . . players on different teams have expressed that to me. Man, I actually feel the same way Andrew feels. I’m waking up in pain every single day, taking all this kind of pain medicine and fighting every day just to practice.”[36]

In addition to the support Luck has received from other players, the Colt’s organization is allowing Luck to keep his remaining prorated signing bonus and roster bonus amounting to approximately $24 million.[37]  This has further fanned some refund seeking fan’s fires.[38]  In response (and a continued show of support for Luck) former Colts player Matt Overton offered to buy up these fans ticket packages and donate them to charity.[39]

The retirement of Luck sent shockwaves through the football community, and its effects will no doubt continue to be discussed for seasons to come.[40] Despite these shockwaves, Colts fans seeking a refund would be unsuccessful.[41] Retirements and injuries are the name of the game in professional athletics, and in part create the news and drama upon which the National Football League thrives.[42] Furthermore, suits of this nature have been filed before and have been unfavorably received in the courts.[43]

Fans will need to become more accepting of early retirements by top athletes.[44] Luck’s retirement was not the first and will likely not be the last as athletes continue to evaluate the health implications of their careers.[45] As such, threats of suit by disgruntled fans may become more common, courts however will likely conclude that fans purchasing season tickets are going to have to face the luck of the draw.[46]

[5] See Pergament, supra note 4 (“[T]he news broke during a Colts preseason game Saturday night, leading to Luck being booed as he left the field by some fans . . .”).

[9] See McCann, supra note 6 (discussing 2019 offseason in which Colts’ head coach told media that Luck was a “no-brainer” to start season and during these media discussions, Colts fans were purchasing tickets).

[10] See Hoffman and Belson, supra note 1 (“Luck’s decision to step away from the game before reaching the age of 30 is unusual for such a high-profile player.”).

[11] See McCann, supra note 6 (describing surprising timing of Luck’s retirement particularly because “if Luck was going to retire before the start of the 2019 season, he would have done so months in advance so that the team could better prepare for his absence”).

[14] See id. (“Are the Colts legally obligated to provide refunds to disenchanted fans? Could ticket holders successfully sue the Colts if they don’t receive refunds? The short answer to both questions is no.”); see also Robinson, supra note 6 (stating fans will likely be unsuccessful in potential claim against Colts).

[15] See McCann, supra note 6 (“[T]his is pro sports we’re talking about. All players retire at some point, and sometimes at surprising points. No ticket holder has a right hinging on when a player decides to hang it up.”).

[24] See id. (arguing Patriots organization “violated the integrity of the game” and therefore fans were entitled to compensation).

[29] For further detail on the likelihood of success, see supra notes 7-28 and accompanying text.

[30] See Hoffman and Belson, supra note 1 (“In just 86 career regular-season games, Luck produced a 53-33 record, and his 171 touchdown passes trailed only Dan Marino, Aaron Rodgers and Brett Favre for the most in the first 100 starts of a quarterback’s career.”).

[31] See Rago, supra note 2 (“[O]nce the initial shock of the retirement diminishes, fans of the NFL might notice a troubling pattern of early and sudden retirements from players in their prime.”); see also Michael Rosenberg, Andrew Luck and the Path to Walk Away, Sports Illustrated (Sept. 6, 2019), https://www.si.com/nfl/2019/09/06/andrew-luck-retirement-reaction-nfl-players-jj-watt-early-retirements-chris-borland (“When the 29-year-old Luck retired, he did not start a trend; he joined one.”).

[33] See id. (listing Borland’s decision to retire among other athletes who retired in their prime).

[34] See John Breech, Rob Gronkowski Shares Gruesome Details About How Bad his Head Injuries Were During his NFL Career, CBS Sports (Aug. 29, 2019), https://www.cbssports.com/nfl/news/rob-gronkowski-shares-gruesome-details-about-how-bad-his-head-injuries-were-during-his-nfl-career/ (describing injuries such as centimeter of liquid surrounding his head, mood swings, insomnia and many others).

[35] See Rago, supra note 2 (“Fox Sports1’s Doug Gottlieb drew the ire of Luck’s peers and fans alike when he tweeted that ‘retiring because rehabbing is too hard is the most millennial thing ever,’ prompting legends such as Troy Aikman and Bo Jackson to race to Luck’s defense.”); see also Rosenberg, supra note 31 (“[F]or those who do want to retire, Luck’s announcement may be inspirational—not so much because of the decision itself, but because of the reaction to it. Most NFL players seemed to applaud Luck.”).

[37] See Tyler Lauletta, Colts Let Andrew Luck Keep Almost $25 Million in Bonuses, Leaving the Door Open for a Potential Return to Football, Bus. Insider (Aug. 26 2019), https://www.businessinsider.com/indianapolis-colts-andrew-luck-retirement-bonuses-potential-comeback-2019-8 (“Colts reached a financial settlement with their former quarterback, and have opted against attempting to recoup nearly $25 million from Luck in the wake of his decision.”).

[40] For further detail on the surprise announcement of Lucks retirement, see supra notes 4-6 and accompanying text.

[43] See id. (noting potential slippery slope this litigation could cause).