Shut Down Chosen Over a Shootout: What Does This Say About the Stature of Women’s Athletics? 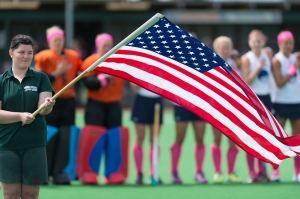 With the clock winding down in the first overtime, it was clear that the contest between the No. 24 University of Maine (Maine) and Temple University (Temple) was a battle.[1]  The score still at 0-0, the two women’s field hockey teams prepared for a second overtime period; that was, at least, what they should have been doing.[2]  Before the teams could start the additional period, Kent State University Athletics Officials informed the teams that they would be unable to complete the game “in order to accommodate pregame events for [the] football game on an adjacent field.”[3]  The nail-biting game ended that very second and was ruled a no-contest, a decision that means the game will not count towards either teams’ competitive statistics.[4]  In shock, both teams left the field, trying to process what had just happened.[5]  This decision has sparked a tremendous reaction, and in an era defined by the entanglement of Title IX within collegiate athletics, leads us to reflect upon the so-called progress in achieving gender equality in college sports.[6]

Title IX was enacted in 1972 as an amendment to the Education Amendments of 1971 and states that “[n]o person in the United States shall, on the basis of sex, be excluded from participation in, be denied the benefits of, or be subjected to discrimination under any education program or activity receive Federal financial assistance.”[7]  The language of Title IX does not mention the application to collegiate athletics, rather it expressly prohibits discrimination within education.[8]  However, because sports programs have repeatedly been found to be “vital and important part[s] of the educational experience,” courts have held Title IX is directly applicable to college athletics.[9]

The Eighth Circuit’s reinforcement of Title IX in Brenden v. Indep. Sch. Dist[10] created a basis for Congress to pass the Javits Amendment in 1974.[11]  This amendment expanded the scope of Title IX protections and established provisions for the implementation of equal opportunity for members of both sexes in any high school, college, or intramural sport.[12]  These provisions provide guidance on Title IX compliance and adjudication and have impacted the way in which courts evaluate these claims.[13]

Although the courts provided some clarity through the interpretations and application of Title IX after the Javits Amendments, confusion still existed in regards to how these legal protections applied to athletic programs.[14]  In December of 1979, the Policy Interpretation of Title IX was published in the Federal Register, which focused on Title IX’s application to athletics and elaborated on how schools can successfully comply with established policies.[15]   Even with the expanded explanations of the scope of Title IX, little impact was seen on the implementation of equality of the sexes in athletic programs.[16]  Various claims continue to be brought under Title IX, resulting in the courts and the legislature, playing catch-up the needs of current athletic programs.[17]

Today’s Environment of Women’s Athletics and Looking Ahead

Title IX’s main purpose is to ensure equal opportunities are provided to members of both sexes, and it is certain this legislation has led to an increase in opportunities for female participation in college athletics.[18]  However, as illustrated by the cancellation of a Division I women’s field hockey game in September 2019 for the purpose of setting up fireworks for a football celebration, our society is still a long way from reaching equality in athletics.[19]

When a situation such as this arises in the context of female athletics, Title IX is the first thing that comes to mind.[20]  In a system where male athletes still currently receive 36% more athletic scholarships than women and colleges spend a reported $3,786 on each male athlete in contrast to the $2,983 on each female athlete, it is clear that women’s athletics are not even on the cusp of reaching equal priority to their male counterparts.[21]

Temple Coach Susan Ciufo put the whole situation into context: “The fact it happened to a women’s sports team essentially put us back a little bit . . . I know we’re not a big revenue sport, but to make young women feel what they did for 70 minutes doesn’t really matter, what are we telling young female athletes about what it means to be an athlete?”[22] The Maine Coach Josephine Babineau stated that the program was looking into filing a Title IX complaint against Kent State, even after the administration issued an apology criticizing its own decision.[23]  Such complaint was filed against the Kent State administration, which proceeded to conduct an internal investigation by the university’s Office of Compliance, Equal Opportunity and Affirmative Action.[24]  The investigation concluded that Kent State did not commit a Title IX violation or exhibit a gender-related bias.[25]  Kent State officials have indicated that they will further examine its policies and practices in order to ensure that a situation like this does not happen again, but the Maine has expressed its dissatisfaction with the inquiry.[26]

With an internal investigation complete, it is unclear whether the Maine or Temple can or will pursue further action.[27]  Additional action, or even simply continued dialogue, has the potential to be a defining moment in women’s athletics.[28] It will require the courts, and administrators everywhere, to fully reflect upon equal opportunity in athletics, and perhaps more influential, the message sent to female athletes going forward.[29]  On behalf of women’s athletics as a whole, it cannot simply be enough that the decision to end the women’s field hockey game for preparation of a fireworks display is justified with an assurance that something like this won’t happen again.[30]

[4]See generally id. (stating game rendered as no-contest and would not count towards either teams ranking and statistics for season).

[12]See id. at 331 (stating provisions as follows: “(1) whether the selection of sports and levels of competition effectively accommodate the interests and abilities of members of both sexes; (2) the provision of equipment and supplies; (3) scheduling of games and practice time; (4) travel and per diem allowance; (5) opportunity to receive coaching and academic tutoring; (6) assignment and compensation of coaches and tutors; (7) provision of locker rooms, practice and competitive facilities; (8) provision of medical and training facilities and services; (9) provision of housing and dining facilities and services; and (10) publicity”).

[13]See id. at 334 (discussing guidance provided by provisions, but stating that there was lag in court dependence upon these provisions because of implementation period of amendment).

[14]See id. at 336 (stating creation of Policy Interpretation and its impact for athletics administrations).

[15]See id. at 336-39 (discussing test explained by Policy interpretation: Part One deals with compliance in financial assistance based on athletic ability, focusing on “whether proportionately equal amounts of financial assistance (scholarship aid) are available to men’s and women’s athletic programs;” Part Two specifies factors to be used in assessment of “equal opportunity” of sexes in factors expressly outlined in previously stated provisions; Part Three focuses on “Compliance in meeting the interests and abilities of male and female students”).

[16]See id. at 343 (discussing how litigation over Title IX non-compliance created limitations on its applicability, which ultimately limited scope of protections Congress intended to create). “By Title IX’s fifteenth anniversary in 1987, the law’s impact on athletics had been insignificant at best, as courts continued to dismiss claims against athletic departments.” Id.  In an attempt to combat the ineffective nature of Title IX, Congress passed the Civil Rights Restoration Act in 1988 to restore the broad scope of sex-based protections. Id. at 343.

[17]See generally Anderson, supra note 7 (explaining how Title IX has been restricted and expanded in circular pattern as causes of action have been asserted; further explaining how similar claims are litigated over and over again without understanding of previous challenges to Title IX and decisions).

[20]See Jensen, supra note 5 (discussing possibility of men’s sport being cancelled for same reason; stating how this hypothetical does not help Kent State officials if Title IX claim is filed).

[23]See Christopher Bumbaca, Kent State Cancels Women’s Field Hockey Game for Football Game Fireworks, School Apologizes, USA Today (Sept. 11, 2019), https://www.usatoday.com/story/sports/ncaaf/2019/09/11/kent-state-apologizes-canceling-field-hockey-game-fireworks/2283935001/ (quoting Maine Head Coach’s reaction to cancellation); see also Bamforth, supra note 3 (quoting Kent State President Tod Diacon: “It was a regrettable decision, and I am truly sorry about it. All week, I have been thinking of the visiting student-athletes who spent countless hours practicing and preparing for a tournament on our campus, and of the parents who traveled here to show their support. We can, and must, do better.”).

[26]See Larry Mahoney, UMaine Disappointed With Kent State’s Handling of Title IX Probe Related to Stoppage of Field Hockey Game, Bangor Daily News (Oct. 4, 2019), https://bangordailynews.com/2019/10/04/sports/umaine-sports/kent-state-rules-no-title-ix-violation-in-umaine-field-hockey-snafu-offers-to-pay-for-teams-to-play-again/ (“[We] are disappointed that, according to the summary report, the investigation did not include interviews with the student-athletes who were affected and disrespected by the decisions made on Sept. 7.  We appreciate, welcome and encourage the broader discussion of Title IX issues sparked by this incident and the investigation.  The University of Maine stands with its student-athletes, coaches and athletic staff, firm in our commitment to equity and support to ensure their success, both in competition and in the classroom.”) (providing statement from University of Maine in response to Kent State’s announcement of its investigative findings).

[27]See id. (detailing investigation and positions of each administration, but not future action of programs in relation to this matter).

[28]See Lindsay Kimble, Kent State Canceled a Women’s Field Hockey Game for the Football Team’s Pre-Game Fireworks, People (Sept. 11, 2019), https://people.com/sports/kent-state-canceled-womens-field-hockey-football-fireworks/ (“The optics and the messaging to every field hockey program and to every field hockey player are that while they matter, they don’t matter more than pre-game football festivities.  We see this as a terrible message being communicated to female student-athletes in this year of 2019.”) (quoting National Field Hockey Coaches Association’s statement).

[29]See generally Brice-Saddler, supra note 1 (“I know we’re not a big-revenue sport, but to make young women feel what they did for 70 minutes doesn’t really matter, what are we telling young female athletes about what it means to be an athlete?”) (quoting Temple Coach Susan Ciufo, highlighting social issue courts will have to evaluate in face of Title IX claims).

[30]See id. (“The fact that it happened to a women’s sports team essentially put us back a little bit.  I think it’s very unfortunate the decision-making process wasn’t thought out more.”) (quoting Temple Coach Susan Ciufo, sharing insight into the overall impact the cancellation of the field hockey, and women’s athletics, as a whole).  If decisions such as this continue to be administered, women’s athletics will continue to be set back, much like Coach Susan Ciufo described.  Id.