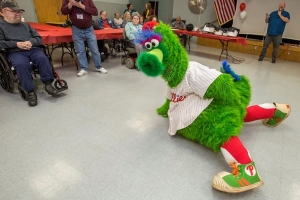 If you’re a fan of baseball, then you know that the Phillie Phanatic is the most popular mascot in baseball, and probably in all of sports.[1]  But what you may not have known is that the Phillies beloved green, furry mascot has found his way into a litigation proceeding.[2]  On August 2, 2019, the Philadelphia Phillies filed a copyright lawsuit against Harrison/Erickson, Inc. (“H/E”) for asserting that they are the rightful creators of the Phanatic, which led H/E to threaten an injunction against the team’s use of the mascot.[3]  The Phillies, who filed the suit in the Southern District of New York, are seeking a declaratory judgement ruling in their favor from District Court Judge Victor Marrero that would preserve their rights to the Phanatic.[4]

The Phanatic is more than just a mascot to most fans as it has been a part of the Philadelphia Phillies organization since 1978.[5]  Bill Giles, a former Phillies executive, is said to have created the idea of the Phanatic in the late 1970’s and worked with H/E to develop the mascot’s costume before it was debuted at a Phillies game in April 1978.[6]  Giles had a vision for an obnoxious, green, “in your face” mascot that would take part in goofy routines with fans, players, umpires, or any one the Phanatic came in contact with.[7]  Giles’ goal was to create a mascot that would embody “the quintessential fanatical Phillies fan.”[8]  Because Giles had no experience in design, he subsequently hired H/E to design the costume and paid them $5,900 for their services.[9]

The Phillies mascot soon became wildly popular among the fans in Philadelphia.[10] Unfortunately, H/E was displeased with how the Phillies were using the mascot’s likeness for merchandise and thus filed a suit for copyright infringement against the team in 1979, which eventually settled.[11]  In 1984, the Phillies paid H/E $215,000 to assign all of their rights in the Phanatic to the Phillies “forever.”[12]  In the assignment, the company sold, transferred, and assigned all rights and interests in the mascot including any reproduction and portrayals of the mascot forever.[13]

Now, the Phillies have initiated suit against the company stemming from a June 1, 2018 letter that the late Phillies Chairman, David Montgomery, received from H/E.[14]  In the letter, the company asserted that it is the true legal author of the Phanatic and can terminate its rights as early as July of 2020.[15]  The company additionally demanded ridiculous amounts of money and threatened to make the Phanatic a free agent and sell his rights to another team.[16]  Thus, the Phillies retained Duane Morris, LLP as counsel and initiated suit on August 2, 2019.[17]

Interestingly enough, the Phanatic has been sued before by parties other than H/E.[18]  In fact, the Phanatic is regarded as the most sued mascot in baseball.[19]  In 1993, the Phanatic cost the team $25,000 when he kicked a pregnant woman in the back and shoved her forward at a Phillies vs. Reds game.[20]  About fifteen years later, the Phanatic was visiting the team’s AA affiliate in Reading, PA when the mascot sat on an elderly woman’s lap causing her arthritis to flare up, leading to a subsequent knee replacement.[21]  Away from the stadium, the Phanatic has been the subject of numerous other litigation suits that generally stem from him jumping on people or attacking them.[22]  For the sake of Philadelphia fans, hopefully the Phanatic will be more successful in the realm of copyright law than he was in tort law.[23]

II.    “Now, here comes the Phanatic before the Court”

The Phillies now seek a jury trial and several declaratory judgements in the Southern District of New York.[24]  Of their claims, the Phillies will focus on one in particular: H/E cannot legally terminate its “forever” assignment of the Phanatic’s rights from 1984 under the Federal Copyright Act.[25] The act specifically provides that an author only has one opportunity to revisit the terms of its grant, or in our case, a forever assignment.[26] Considering that H/E already negotiated a deal with the Phillies in the 1980’s, they will have a hard time getting around this provision.[27] The Phillies also assert that renegotiating a new contract, and essentially terminating the 1984 deal, would be an unjust enrichment to H/E and a breach of good faith.[28]

The club also hopes that Judge Marrero will not terminate the Phillies’ rights as the author of the Phanatic’s character.[29]  The Phillies have taken the position that the Phanatic’s personality was born after an intern, who was the man behind the costume in 1978, created the goofy, lovable character.[30]  Additionally, the Phillies allege that they are responsible for creating substantial content regarding the life of the Phanatic, including his personality and other traits.[31] For example, the Phanatic today is well-known as a 6’6 green, furry monster who hails from the Galapagos Islands and enjoys eating cheesesteaks, hoagies, Tastykakes, and watching Rocky.[32] According to the Phillies, the Phanatic did not have these traits when H/E made the costume.[33]

A final, yet important, claim that the Phillies are attempting to get judgement for is that they can use the derivative works exception under copyright law to claim protection of Phanatic-inspired products sold by the team.[34]  A derivative work is a new, original product that includes aspects of preexisting, already copyrighted work.[35]  The Phillies have created countless derivative works based on the Phanatic since the club gained the copyright including bobble-heads, towels, shoes, and the currently popular cooling headband.[36]  The Phillies contend that H/E cannot terminate the club’s right to use the derivative works developed before June 2020 even if it were successful in ridding the 1984 agreement of certain provisions.[37]

III.    Riding his Four-Wheeler off Into the Night

If the Phillies end up unsuccessful in court, that could potentially  mean H/E may gain control of the Phanatic and be able to make it a “free agent.”[38]  At that point, H/E would most likely sell the rights to another team or to a different sport for much more money than they received in 1984.[39]  However, the more likely outcome is that this dispute will settle before it goes to trial.[40]  The time will soon come where both parties can agree on what they want: a reasonable dollar figure.[41]  Additionally, neither party is going to want to put themselves through the dreadful and expensive discovery process that this case could create.[42]  In the meantime, maybe the Atlanta Braves could pick up the rights since their mascot is practically a knock-off of the Phanatic already.[43]  But yet, the Phanatic should be able to stay right at home where he belongs, in Philadelphia.[44]

[1] For further discussion regarding the history and evolution of the Phillie Phanatic, see infra notes 5-13 and accompanying text.

[25] See id. (acknowledging that federal copyright act does not provide authors with multiple opportunities to renegotiate grants of copyrights after they have full knowledge of market value at issue).

[27] For further discussion on H/E’s first lawsuit with the Phillies over the Phanatic, see supra notes 10-13 and accompanying text.

[30] See Fernandez, supra note 28 (noting that mascot became famous after intern “rocked the . . . out of the costume” in 1978); see also McCann, supra note 4 (explaining that costume alone did not create Phanatic’s charismatic personality).

[33] See id. (“Without the Club’s Contributions, the Phanatic would not have been a character at all.”).

[42] See id. (noting amount of time, money, and effort that proceeding would cost if not settled).

[44] See McCann, supra note 4 (inferring that settlement of this lawsuit will most likely allow Phanatic to stay in Philadelphia).