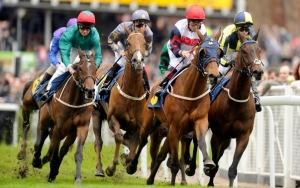 Death on the Track

During the first half of this year, thirty racehorses died at the Santa Anita racetrack in California.[1] The racetrack, renowned for its connection to Hollywood movie stars and one of the most famous racehorses in American history, shut its doors for three weeks in March amid a flurry of horse deaths and calls by animal rights activists to ban the sport.[2] On the day the track reopened, surveillance footage showed a horse trainer’s assistant administering performance enhancing drugs to a horse set to run the very first race and prompted a state investigation into drug-use at “The Great Race Place.”[3] While the trainer involved in the incident was banned, the track had previously allowed trainers with doping records to continue to race.[4]

Unfortunately, horse fatalities are not uncommon on U.S. racetracks.[5] While the Santa Anita deaths may have attracted significant media attention because they occurred in such rapid succession, Santa Anita is not the most fatal racetrack in the United States.[6] The Hawthorne Race Course in Illinois, and Churchill Downs in Kentucky, are the deadliest racetracks in America, respectively.[7] In particular, Churchill Downs, home to the world-famous Kentucky Derby, has maintained a fatality rate nearly fifty percent higher than the U.S. national average for the last three years.[8] Santa Anita, Hawthorne, and Churchill Downs are indicative of a disturbing phenomenon in American horse racing, where horse fatalities are “two and a half to five times” higher than international averages.[9]

A number of factors contribute to lower horse fatality rates in Europe, among them, racing culture.[10] When European racehorses compete for prize money, the payouts are much lower than in the United States.[11] With less commercial pressure, trainers can afford to take more seasonal breaks, and place less physical strain on the horses.[12] Another factor in horse fatalities is the composition of the track.[13] In Europe, racehorses run primarily on turf, while in the United States, sand-dirt mixtures are more common.[14] However, the most important difference is that drug usage is widely banned in Europe.[15] Drugs are a leading cause of death in racehorses, primarily because they mask pain.[16] This allows injured horses to run when they should not be running, and it allows healthy horses to perform above their natural limits, placing a great deal of physical stress on their bodies.[17]

At the heart of the drug-restriction debate in the United States is Furosemide, commonly known as Lasix.[18] Although it is almost universally banned in other countries on race day, more than ninety percent of North American racehorses receive the drug before competitions.[19] Ostensibly, the drug is administered to racehorses on the day of a race in order to prevent Exercised Induced Pulmonary Hemorrhage (EIPH) or “bleeding.”[20]

However, Furosemide also acts as a diuretic, and drastically increases the production of urine.[21] This process allows the horse to shed almost twenty pounds of water weight right before a race, increasing its speed, and improving its performance.[22] But this increased performance comes at a physical cost.[23] Furosemide, like other diuretics, causes dehydration and the loss of electrolytes, which can impair critical heart and muscle functions.[24] When used in combination with poor track conditions, physically demanding schedules, and other drugs, this can put a race horse at risk of serious injury or death.[25]

The adoption of legislation regarding the use of drugs in horse racing has been slow.[26] The Racing Medication & Testing Consortium, a non-profit organization that lobbies for standard horse racing practices, has put forth the National Uniform Medication Program.[27] The program contains model rules that would establish a list of controlled substances; a method for accrediting laboratories that test racehorses; a point system for suspending trainers that have used performance enhancing drugs; and a requirement that Furosemide be administered by a third party.[28]

Fortunately, there is some evidence to suggest that the tide is turning.[32] The most recent annual “Round Table Conference on Matters Pertaining to Racing” was dominated by the issue of regulatory reform.[33] At the conference, track owners, horse trainers, and representatives of animal welfare groups voiced their support for the federal Horseracing Integrity Act (“HIA”) and promised to promote new safety practices in their states.[34]

The HIA would establish the Horseracing Anti-Doping and Medication Control Authority, a federal corporation with the power to set national standards for horse racing.[35] The governance board would be comprised of medical experts, breeders, trainers, and former racetrack executives.[36] The authority would be empowered to investigate drug usage, establish sanctions for rule violations, and promote education and research related to horse doping.[37] But most importantly, it would ban the use of controlled substances on the day a horse is scheduled to race.[38]

The act would not place a great burden on the sport; in fact, it may save it from a public that is rightly intolerant of animal abuse.[39] The public outcry over the deaths at Santa Anita has been so severe that well established horse breeders are concerned over the future of the sport.[40] While some tracks have begun to adopt standards that would mirror the effects of the bill, other tracks, such as Churchill Downs, are resistant.[41]

Racetracks in Europe operate with restrictions similar to those found in the HIA, and the costs of operating under those standards are neither impractical nor unreasonable.[42] The result of greater regulation is far less fatalities among race horses.[43] If the HIA becomes law, it has the potential to improve the health and safety of all equine athletes regardless of where they race.[44] We ignore their safety at the risk of great tragedy.[45]

[2] See id. (reporting racetrack closed in March of 2019 for three weeks amid protest from animal rights activists); see also, Daniel Ross, Death on the Track: Why are so Many Horses Dying at Santa Anita?, The Guardian (Mar. 8, 2019) [hereinafter Ross I], https://www.theguardian.com/sport/2019/mar/08/santa-anita-closes-horse-deaths-racing (discussing Seabiscuit’s famous victories at Santa Anita, and how actors such as Errol Flynn, Marlene Dietrich, and Bing Crosby attended races there during Hollywood’s “Golden Age”).

[4] See id. (disclosing trainer involved in incident was banned, but that “[t]he track tolerated trainers who had been cited for using performance-affecting drugs.”).

[5] See id. (observing “[r]racetracks in the United States have a particular problem with horses dying.”).

[14] See Beardsley, supra note 10 (reporting most tracks in European horse racing are made of turf); see also Ross I, supra note 2 (noting traditional American racetrack is made of sand-dirt mixture, Santa Anita experimented with synthetic material which led to lower injuries, but was abandoned due to costs and pressure from owners).

[16] See Ross I, supra note 2 (noting “[e]xperts have long considered drugs a leading cause of horse deaths” because they mask pain).

[17] See id. (explaining drugs allow “at-risk horses run when they should not . . . [and make] horses unnaturally stronger and faster, increasing stress on their limbs.”).

[19] See id. (noting that ninety percent of racehorses in North America receive this drug on race day and also, this drug is banned on race days around world).

[21] See id. (explaining Furosemide increases production of urine in racehorses and was previously used to reduce detection of other performance enhancing drugs).

[22] See id. (explaining how decreasing horses’ weight by 20 pounds can have significant impact on race performance).

[23] For a further discussion regarding the physical costs of Furosemide, see supra notes 18-20 and accompanying text.

[25] For a further discussion regarding the combination of factors that lead to horse deaths during races, see supra notes 10-17 and accompanying text.

[26] See Ross I, supra note 2 (noting progress has been made over last twenty years).

[35] See Horseracing Integrity Act of 2019, H.R.1754, 116th Cong. § 4(b) (2019) (“The Authority shall be established as a private, independent, self-regulatory, nonprofit corporation with responsibility for developing and administering an anti-doping and medication control program for covered horses, covered persons, and covered horseraces consistent with the provisions of this Act.”).

[37] See id. at § 6(b) (detailing structure of program established by Horseracing Integrity Act).

[43] For a further discussion regarding the finding of lower mortality rates in more regulated horse races throughout Europe and Asia specifically, see supra notes 5-9 and accompanying text.