Is it Fair Play to Pay?: Refereeing California’s Fair Pay to Play Act 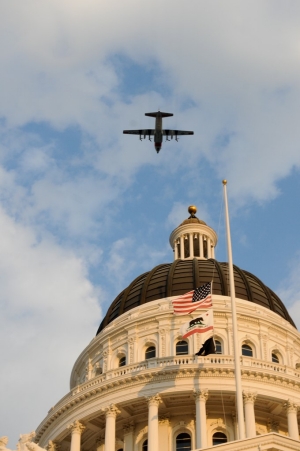 At 4:00pm Pacific Daylight Time on September 18, California Senate Bill 206 was presented to Governor Gavin Newsom.[1]  SB 206 is better known as the Fair Pay to Play Act, and it would proscribe state “postsecondary educational institutions” from “prevent[ing] a student[-athlete] from earning compensation [for their] name, image or likeness” and parallel protection for “the student’s scholarship eligibility.”[2] This proscription is antithetical to the current NCAA regime that, instead, prohibits this type of compensation of student-athletes.[3]

One week prior to the bill’s presentation to the Governor, it had received a favorable vote of 39-0 in the California Senate, which had followed a similar vote of overwhelming support, seventy-three to zero, in the California Assembly.[4] After presentation, the Governor had twelve days to sign or veto the enrolled bill before it would otherwise become law without his signature.[5] On September 30, the Governor’s deadline for taking action on the bill otherwise destined to become law, he signed the Fair Pay to Play into law.[6]  Before the Governor’s signature, stakeholders on each side of the debate not only watched with baited breath from around the nation to see what will happen next but also weighed in like campaign staffers in a post-debate media spin room, attempting to conform coverage to their normative views on whether it is fair play to pay student-athletes for their work.[7] Since his signature, this debate has continued to unfold.[8]

Despite such strong support by the California legislature, the bill has received pointed criticism from opponents ranging from the NCAA and universities within the state to former Florida quarterback, Heisman Trophy winner, and current SEC Nation co-host Tim Tebow.[9] This bill signaled to Tebow a shift from a collective, team-oriented mindset to a individualistic one, he argued in an interview with Stephen A. Smith, by “changing it from us, from we, from my university, from being an alumni [sic] where I care, which makes college football and college sports special to then, okay, it’s not about we it’s just about me.”[10] This individualistic mentality, Tebow implicitly warned, would damage college sports because the team mentality is “why people are more passionate about college sports than they are about NFL” and “why the stadiums are bigger in college than they are in the NFL.”[11] ESPN also reported that despite Dabo Swinney, Clemson University football coach, signing a decade-long contract from which he is guaranteed more than nine million dollars per year, “he would walk away from college coaching and do something else if players were paid as employees.”[12]

The NCAA Board of Governors has gone as far to pen to Governor Newsom a letter in which it argued the bill was constitutionally impermissible because of its resulting interference with interstate commerce, an area reserved to the purview of the Congress, not a state legislature, by Article I Section 8 of the United States Constitution.[13] A similarly oppositional letter from NCAA President Emmert warned the bill would, inter alia, preclude involvement of California teams in certain championship games and matches.[14] The bill’s sponsor, California State Senator Nancy Skinner, countered the Board’s and Emmert’s assertions by condemning the former as legally inaccurate and the latter as repugnant to antitrust jurisprudence.[15]

However, unlike the virtually unanimous California legislature, athletes and other sports commentators have not been of one voice on this issue.[16] Echoing the description of the bill its sponsor proffered about “fundamental fairness,” ESPN basketball analyst Jay Bilas has contrariwise framed the bill’s concern with student athlete compensation as “a civil rights issue for athletes to have the same economic rights as literally everyone else.”[17] Bilas went further, calling the NCAA’s lobbying “threatening” and “a little bit distasteful.”[18] After analogizing this bill and the surrounding movement to a “train [that] keeps moving down the tracks,” he characterized the NCAA’s lobbying efforts as essentially saying “if you do this we will strap the—we will strap the players to the—and lash them to the tracks so that the train runs them over.”[19] LeBron James tweeted his support of the California bill in early September before the bill had garnered a final vote in either legislative house, asking his Californian followers to phone their legislators to advocate for their vote for the bill.[20] While Tebow had distilled the motive behind the bill as “taking [what makes college football special] away just so college kids can earn a dollar,” others were quick to point out the disparity in financial means of college athletes, highlighting the reality that not all student-athletes are privileged to be able to afford the living expenses associated with college without compensation for their work.[21]

Outspoken opposition notwithstanding, other states have contemplated similar bills.[22] Despite Dabo Swinney’s aforementioned admonition of student-athlete compensation, two South Carolina legislators have announced that as soon as their legislature reconvenes, they will pursue legislation similar to California’s Fair Pay to Play Act.[23] New York’s legislature also reconvenes in January, and there is a state Senator there who has written legislation to require each of the state’s universities to share fifteen percent of its sports revenues evenly among its student-athletes.[24] Moreover, support has also come at the federal level.[25] Earlier this year, Senator Chris Murphy of Connecticut, a Democrat, and Representative Mark Walker of North Carolina, a Republican, issued a bipartisan report intended to highlight the disparity between the individual student-athletes whose play makes the system possible and the rest of the actors within college sports (e.g. coaches, universities, vendors) who are the highly-compensated beneficiaries of the system.[26] Representative Walker has also sponsored a tax code bill which would endanger the NCAA’s tax exempt status should it not amend its policies to allow student-athletes to profit from their likenesses.[27] Should the NCAA not make this policy change, Ohio Congressman Anthony Gonzalez made public his intentions to introduce more legislation in the United States Congress in an attempt to accomplish the same end: player compensation.[28] That it has yet to be seen whether any of these bills outside California will successfully become law only heightens tensions as universities and colleges throughout the nation lie in wait, planning, no doubt, how to remain competitive in the realm of college sports if more of these bills become law.[29]

The impact of the California Fair Pay to Play Act may have more downstream impact as well; the delay between its enactment and enforcement is more than three years: the law will not become effective until January 1, 2023.[30] Influenced by the need to remain competitive with the many universities and colleges throughout California, South Carolina, and New York, stakeholders in other states may be pressured into lobbying their state legislatures to follow suit, passing similar bills requiring, or at least permitting, compensation of student-athletes.[31] For now, the watch continues; will this be a mere political aberration that will end in the entrenchment of the status quo, or are we on the cusp of an inflection point in college sports that will completely transform and fundamentally redefine the relationship of student-athletes to their institutions?[32]

[21] Compare First Take, supra note 7, with David Mulugheta (@DavidMulugheta), Twitter (Sept. 13, 2019 12:56 PM), https://twitter.com/DavidMulugheta/status/1172554595014496256 (“Just in case anyone is curious, this is what ‘privilege’ sounds like. I guarantee @TimTebow never missed a meal growing up because his parents didn’t have the means, nor does he understand what having to help your mother pay bills so the lights stay on feels like.”), and Keith Olberman (@KeithOlberman), Twitter (Sept. 13, 2019 2:28 PM), https://twitter.com/KeithOlbermann/status/1172577881647722497 (“And everything I have in MY career started with an unpaid internship in the newsroom of a NYC TV station (which I could take while others couldn’t because I didn’t need to make money). One of the definitions of privilege is, thinking ‘the system works because it worked FOR YOU.’”).

[26] See id. (linking to fifteen-page report that promises to be first of several in series on student-athlete compensation).

[32] See id. (marking belief of South Carolina legislator that each state’s bill will provide incentive to others to pass similar legislation in response to shift in public perception of student-athlete compensation).