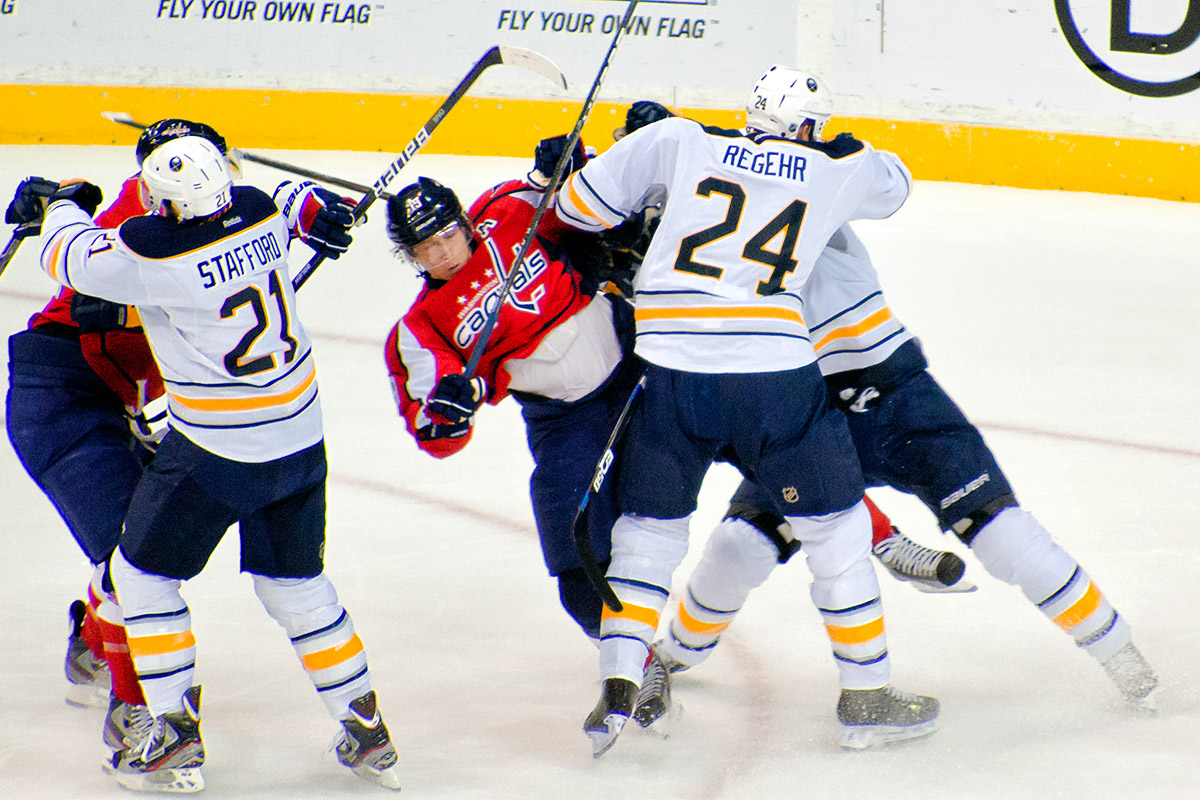 In 2010, researchers at Boston University diagnosed the first case of Chronic Traumatic Encephalopathy (“CTE”), a severe neurological brain disease, in a hockey player.[1] Former professional hockey players subsequently filed claims arguing the National Hockey League (“NHL”) did nothing to prevent these injuries and, as a result, should take responsibility for the long term and degenerative effects.[2]  Claimants ranged from those already experiencing symptoms of CTE to others concerned about the possibility of facing them in the future.[3]

In the shadow of the National Football League (“NFL”) concussion litigation, the NHL began to take measures by rolling out new concussion protocol and banning player checks to the head.[4]  However, the NHL refused to take responsibility for its inadequate protections, and this failure is a disservice to those affected by CTE.[5]

Comparing and Contrasting the NFL Litigation

The NFL litigation resulted in a one billion dollar settlement providing retired players with treatment and money damages based on their stage of symptoms.[6]  The NFL, in reaching a settlement, was required to acknowledge a causal link between the sport and CTE.[7]

In contrast, the NHL has declined to acknowledge whether the sport exposes its players to a heightened risk for CTE.[8]  Dr. Bennett Omalu, best known for his research pertaining to CTE in former football players, has lent his support to NHL players as well.[9]  The neurosurgeon who co-founded Boston University’s CTE center, Dr. Robert Cantu, has stated NHL players are within the “upper tier of risk” for concussive blows due to the sport’s violent nature.[10]  Hockey has long been a sport of grace, however, in America, where 70% of concussions over the course of four seasons came from legal hits, it is one of violence as well.[11]

Former players sought to prove that hockey places its participants at a heightened risk for CTE and, as a result, the league should be required to provide treatment. [12]  The NHL responded by seeking to subpoena use of pre-publication research data from Boston University’s CTE center to rebut any presumption of a causal link.[13]

However, a US District Court judge denied the request, stating the scope was excessively broad and unnecessary to the NHL’s defense.[14]  The crux of this litigation revolved around the NHL and its professionals refusing to see a causal or proximate relationship between CTE and repetitive head trauma suffered throughout a player’s career.[15]

The players describe a league that is “happy to market violence and knew that fighting was a major selling point because of their product.”[16]  They demanded the NHL set up medical monitoring and treatment systems for retired players suffering from these cognitive symptoms.[17]  The NHL aimed to continue the litigation rather than settle with players in order to avoid admitting liability.[18]

In July, all 100 plaintiffs were denied class certification, meaning that each litigant was left with the option of filing his claim individually.[19]  Further, as of September 2018, the judge ordered the NHL to enter into mediation with the players instead of proceed to trial.[20]

As of November 12, 2018, the NHL and 318 former players agreed to a tentative $19 million settlement.[21]  Each player is eligible to receive a payment of $22,000 and the possibility of treatment if necessary.[22]  In addition to monetary relief for former players, the NHL and the NHL Players Association negotiated new rules including “harsher penalties for hits to the head and forced removal of players who show symptoms of potential concussions.”[23]

However, the NHL continues to deny claims that hockey is linked to CTE.[24]  When asked to compare the NHL and NFL settlement, the lead counsel representing the players, Steven Silverman, explained that the players received far less than their NFL counterparts as of a result of how each league chose to deal with the issue.[25]  Many critics blame the lack of participation by prominent players for the monetary outcome of the case.[26]  Regardless of the disparity, Silverman remains hopeful that the settlement will have a lasting impact on the safety of the game going forward.[27]

The NHL settlement effectively guards the sport of hockey from future litigation while fully protecting the interests of its owners.[28]  While other prominent concussion settlements have ended in long-term monitoring programs, the NHL leaves current and future players at a disadvantage.[29]

The long term result of this minimal settlement is going to be a league which continues to profit off of the correlation between hockey’s hard hits and CTE.[30]  If the NHL truly wanted to protect its players going forward, a good place to start would be acknowledging a causal link between the sport and CTE.[31]

[1] See Mike Hughlett, Lawsuit Against NHL Over Concussions Heating Up, Star Tribune (Apr. 24, 2017), http://www.startribune.com/lawsuit-against-nhl-over-concussions-heating-up/420199203/ (explaining there has been more than 20 years of discussion on concussions).

[2] See Sean McIndoe, How the NHL Concussion Lawsuit Could Threaten the Future of the League, The Guardian (Apr. 5, 2017), https://www.theguardian.com/sport/2017/apr/05/nhl-concussion-lawsuit-could-threaten-future-of-league (detailing players’ proximate cause arguments).

[3] See id. (explaining some players already possess CTE-like symptoms and others are concerned they will develop it in the future); see also Hughlett, supra note 1 (writing that former hockey player states,“Whenever I’m irritable or forgetful, is it because I’m getting old, or is it because of the abuses to my head over my career.”).

[4] See McIndoe, supra note 2 (stating NHL began to take more corrective and proactive measures, such as appointing “spotters” who watch for concussions from standard and via video from NHL headquarters.)

[5] For a further discussion on the NHL’s refusal to admit liability, see infra note 18 and accompanying text.

[8] See id. (“At bottom, the science just has not advanced to the point where causation determinations can be responsibly made.”).

[9] See id. (explaining his views that the cases are similar but not directly related).

[11] See id. (“[P]layers skate with a posture that makes removing all head contact from the game virtually impossible.”).

[12] See McIndoe, supra note 2 (explaining “[N]o one could understand the impact concussions could have back in those days” and “[P]layers involved are ‘mere puppets’ and some of these stories are the work of public relation firms”).

[13] See Hughlett, supra note 1 (explaining Boston University [fought] release because “it is a demand that threatens to have a chilling effect that could undermine research”).

[14] See Rich Barlow, Court Rules for BU, against NHL in CTE Case, BU Today (Apr. 28, 2017), http://www.bu.edu/today/2017/court-rules-for-bu-against-nhl-in-cte-case/ (explaining NHL’s request for “all CTE-related discussion, prior publication ... autopsies and death certificates” as unnecessary because “NHL could not have known about possible causal links between head injuries and CTE based on information in unpublished research”).

[16] See id. (explaining this as downplaying and ignoring the damage potentially involved for players).

[18] See id. (stating the NHL would rather deal with negative press than admitting liability).

[19] See In re Nat'l Hockey League Players' Concussion Injury Litig., 327 F.R.D. 245, 265 (D. Minn. 2018) (“Since[. . .] the choice-influencing factors point to several different states, depending upon the playing history and domicile of each class member, the Court would be forced to apply a wide range of legal standards for the recovery of medical monitoring.”); see also Associated Press, NHL, Ex-Players Enter Mediation For Concussion Lawsuit, ESPN (Sept. 11, 2018), http://www.espn.com/nhl/story/_/id/24647111/nhl-mediation-ex-players-concussion-lawsuit-says-gary-bettman (explaining more than 100 former players are claimants now required to file separate or smaller claims).

[22] See Stephen Whyno, NHL, Retired Players Reach Tentative Settlement in Concussion Lawsuit, CBC Sports (Nov. 12, 2018), https://www.cbc.ca/sports/hockey/nhl/nhl-concussion-lawsuit-settlement-1.4901856 (“In addition to cash payment, the settlement includes: Neurological testing and assessment for players paid for by the league, up to $75,000 in medical treatment for players who test positive for two or more tests, and a ‘Common Good Fund’ for retired players in need, including those who did not participate in the litigation, worth $2.5 million.”).

[23] See Kilgore, supra note 21 (explaining broader impact of lawsuit on NHL because, “NHL instituted a new concussion protocol before the 2016-17 season and then updated it before last season”).

[24] See id. (“The NHL does not acknowledge any liability for any of Plaintiffs’ claims in these cases. . . the parties agree that the settlement is a fair and reasonable resolution.”).

[25] See id. (“The NFL made a business decision to put the concussion issue to bed without any substantive litigation occurring. The NHL made a decision to fight tooth and nail for over four years and ultimately chose to settle without being legally compelled to do so.”)

[26] See Whyno, supra note 22 (“I want [Wayne Gretzky] to use his platform to help the men who protected him throughout his career. Lack of pressure from former players is a direct result of this insulting attempt at a settlement.”).

[27] See Kilgore, supra note 21 (“All sports, once the spotlight of concussions shines across any playing field or rink or arena and people are watching or cognizant of the issue, you’re going to have more cautious to the benefit of player safety.”).

[28] See Whyno, supra note 22 (“This decision essentially forced the 140 [plus] players involved in the suit to settle and prevented the participation of all other potential litigants. So it will seem that both sides ‘won’ in what was really a lopsided victory for the owners.”).

[29] See id. (“It’s just that all the owners won by gaining current and future protection from damages and a minor fraction of the players won something that they would have zero change in obtaining in isolation versus the league.”); see also In Re Nat’l Coll. Athletic Ass’n Student Athlete Concussion Litig., 314 F.R.D. 580, 584 (N.D. Ill. 2016) (explaining NCAA settlement would set up a 50 year medical monitoring period for all class action plaintiffs and allocate $5 million to further concussion research).

[30] See McIndoe, supra note 2 (“The link between CTE and head trauma is widely accepted”); see also Whyno, supra note 22 (“Had Nelson certified the class action, more than 5,000 former players would have been able to join the case”).

[31] See Lauren Theisen, NHL Won’t Admit Liability, Will Pay Around $19 Million in Concussion Lawsuit Settlement, Spin (Nov. 12, 2018), https://deadspin.com/nhl-wont-admit-liability-will-pay-around-19-million-i-1830395387 (“The NHL is really in the dark ages …[y]ou ask any seven-year-old and they will tell you CTE is real. The NHL is being ridiculous. It’s almost laughable.”).