A Risky Bet: The City of Oakland Prepares to File an Antitrust Suit Against the Raiders for Relocating to Las Vegas 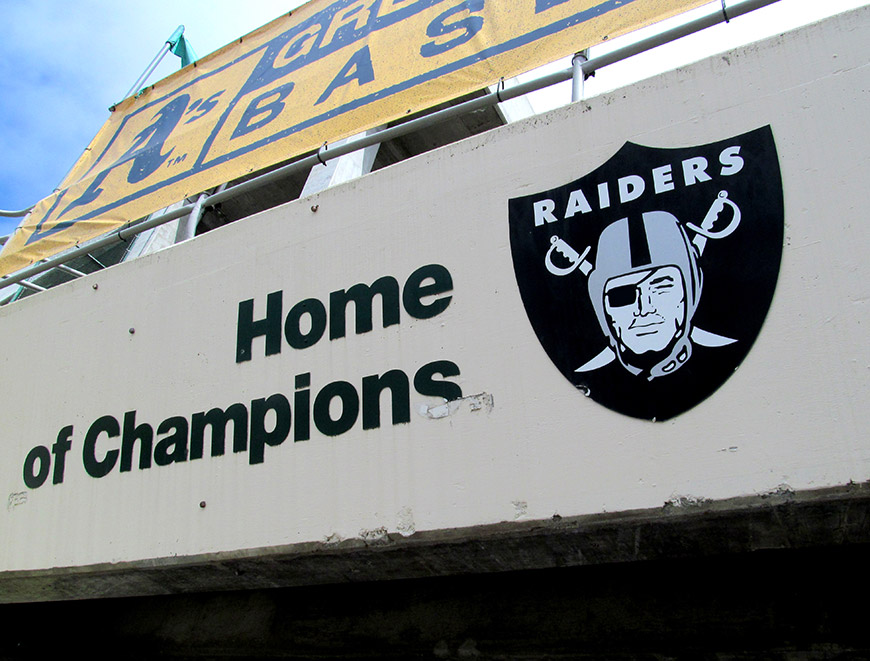 In 2020, Las Vegas, Nevada will be welcoming its first ever professional football team.[1] That’s right; the Raiders will call Sin City home.[2] The team will move from the Oakland Alameda Coliseum (“Coliseum”) in California to a newly built stadium in Las Vegas, Nevada.[3] The Raiders seem to have hit it big on their new deal with Las Vegas.[4] At the north end of the new stadium is a view of the famous and luxurious strip of lavish hotels and casinos.[5]  However, while the Raiders will be sitting comfortably in a new stadium worth over $1.8 billion, the vacated Coliseum will be incurring debt.[6]  The many disgruntled fans in Oakland dressing in silver and black every Monday, Thursday, and Sunday question why they must take care of the remaining costs of the Coliseum.[7]  For these reasons, Oakland is contemplating filing an antitrust lawsuit alleging that the team owners essentially colluded in efforts to restrict the team franchise from remaining in Oakland.[8]

The Oakland City Council authorized the lawsuit and even selected four law firms to handle the matter.[9]  The firm would handle the suit on a contingency basis, with not a dime spent by Oakland’s taxpayers.[10]  Oakland’s situation essentially mirrors the same allegations and concerns that provoked the City of St. Louis to file its antitrust suit after its beloved Rams left the city to relocate to Los Angeles.[11]

Ironically enough, the most recent change to the National Football League (“NFL” or “the League”) relocation policy resulted from prior litigation between the Raiders’ organization and the NFL in 1978.[12]  At the time, the Raiders organization requested to relocate to Los Angeles and leave its then-current stadium in Oakland.[13]

Back then, the NFL’s rule regarding relocation required unanimous approval by the League team owners before allowing a franchise to relocate to the home territory of another team.[14]  The League denied the Raiders' request to relocate.[15]  The Raiders maintained that the NFL’s policy violated the Sherman Act of antitrust laws, which “prohibits every agreement, conspiracy, or other concerted activity in restraint of trade.”[16]  In evaluating the Raiders’ claim, the court decided whether the agreement in question imposed an “unreasonable restraint” on competition.[17]  The district court ultimately found that the Leagues’ previous policy to relocate franchises unreasonably restrained the Raiders’ organization.[18]

Fast forward to the present; the League now has a new relocation policy in place.[19]  The policy suggests that any franchise owner interested in relocating must justify the request based on objective factors.[20]  Arguably, the most critical factor of the policy is that “clubs are obligated to work diligently and in good faith to obtain and maintain stadium facilities in their home territories.”[21]  These specific issues of upkeep and maintenance were crucial for the success of St. Louis’ arguments for relocation and most likely will be equally as significant in Oakland’s dispute.[22]

Following in the footsteps of St. Louis’s successful antitrust complaint last year against the Los Angeles Rams and the NFL, Oakland is contemplating doubling down and filing its antitrust suit against its former stadium tenants: the Raiders.[23]  A city must show that the departing sports franchise and the accompanying league have created an anticompetitive restriction in the market of trade.[24]  To be successful in an antitrust suit, the city must further show that the franchise departure has harmed the city’s proprietary interests and value.[25]

Oakland will likely rely primarily on the legal theory that the Raiders and the NFL violated the Sherman Act.[26]  As for the many arguments Oakland may allege, one possible theory is that the Raiders organization’s payment of “relocation fees” evidences how the League team owners are enriching themselves unfairly by approving the relocation of the franchise.[27]

Oakland may also detail specific instances when the Raiders’ organization and the NFL misrepresented their intentions to keep the franchise in the Oakland.[28] ESPN reported on the organization’s alleged early relationship with Las Vegas and described the interactions as “secret meetings” discussing future opportunities as well as examining the sports betting issues.[29]  Potentially unveiling correspondences such as these between the League and the Raiders’ organization in trial will strengthen Oakland’s claim.[30]

Oakland can assert similar arguments to those St. Louis brought in its successful action against the Rams and the NFL.[31] However, similarities do not necessarily always serve as an indicator of a successful verdict.[32]  This may be one of the reasons why Oakland is still waiting to file suit.[33]  The city is also concerned that the Raiders and the NFL may file a counterclaim.[34]

Nonetheless, if Oakland takes a gamble against its former team for relocating to Las Vegas, the antitrust theory might be more difficult to prove this time around.[35]  In prior successful suits, League offices and team owners prevented teams from moving in order to derive financial gain.[36]  Here, the team is merely leaving freely without pushback from the NFL in route to a market where it may have more success monetarily.[37]

Oakland still may have a chance.[38]  As mentioned, the NFL relocation policy stresses that “clubs are obligated to work diligently and in good faith to obtain and maintain stadium facilities in their home territories.”[39]  This section of the policy lends support to Oakland, given that the city attempted to find ways to ways to keep the team at home.[40]  Mayor of Oakland, Libby Schaaf, provided financial proposals to League offices to build a new football-only stadium of their own in Oakland to house the Raiders’ franchise, which the NFL ultimately rejected.[41]  Instances like these could be beneficial to Oakland in arguing its case.[42]

[1] See Will Brinson, When Will the Raiders Actually Move to Las Vegas? Here Are the Scenarios, CBS Sports (Mar. 28, 2017), https://www.cbssports.com/nfl/news/when-will-the-raiders-actually-move-to-las-vegas-here-are-the-scenarios/ (indicating how Raiders’ organization will be relocating after receiving nearly unanimous approval from team owners and League offices who voted to move team franchise).

[9] See Abraham, supra note 6 (detailing how taxpayers will not spend money on lawsuit).

[10] See id. (noting John Quinn and other selected firms will be working on contingency basis).

[13] See id. (describing how Raiders team franchise has moved once before to Oakland).

[16] See L.A. Mem’l Coliseum Comm’n, 726 F.2d at 1385 (addressing how Raiders argued NFL’s policy violated antitrust laws); see also Sherman Act, 15 U.S.C. § 1 (2004) (detailing how every contract, agreement, or combination of forms of trust will be in violation of Sherman Act if it restrains open markets and trade).

[20] See Complaint for Plaintiff at ¶ 11-15 (establishing new factors which owners much provide if they choose to request relocation).

[25] See Clayton Act, 15 U.S.C. § 15(a) (2018) (explaining plaintiff’s injury requirements for antitrust claims in order to have standing and be successful in lawsuit).

[29] See David Purdum, How the Raiders Got Comfortable With Sports Betting, ESPN (Apr. 3, 2018) http://www.espn.com/chalk/story/_/id/23003330/nfl-how-two-las-vegas-dads-helped-raiders-get-comfortable-sports-betting (noting that Raiders’ owner Mark Davis went to meetings in Las Vegas to meet with casino officials and moguls to examine how professional football and sports betting can co-exist).

[32] See id. (implying similarities do not necessarily guarantee Oakland will be successful in antitrust suit).

[33] See Chris De Benedetti, Why Hasn’t Oakland Sued the NFL Yet?, East Bay Express (July 17, 2018) https://www.eastbayexpress.com/oakland/why-hasnt-oakland-sued-the-nfl-yet/Content?oid=18203804 (acknowledging Oakland’s suit has not been filed yet because Oakland Mayor has strong concerns in supporting Oakland’s third party lawsuit and its possible cost to Oakland taxpayers).

[34] See id. (addressing how if Oakland ultimately files suit, it may leave Oakland vulnerable to NFL and Raiders’ organization countersuing).

[35] See id. (indicating other reasons why elected officials have been hesitant in advocating for filing suit against NFL and Raiders' organization)

[37] See id. (“The NFL did nothing to prevent the team from moving to the city where they perceived the greatest market demand. The fact that a team is able to leave its home territory to go to a different territory of its choice is generally seen as favorable to antitrust.”)