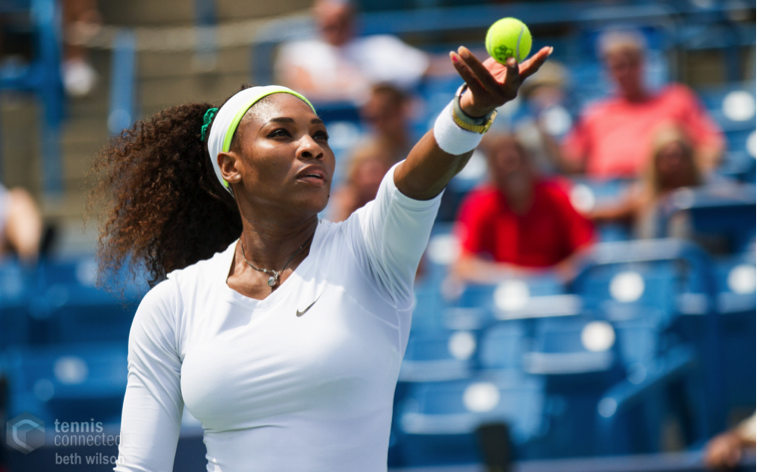 Then, days into the US Open, a chair umpire sanctioned competitor Alizé Cornet for unsportsmanlike conduct because Cornet removed her shirt when she realized it was on backwards.[4]  The United States Tennis Association (“USTA”) later clarified that Cornet should not have received a code violation because “[a]ll players can change their shirts when sitting in the player chair.”[5]  The Women’s Tennis Association (“WTA”) also claimed the umpire’s decision “was unfair and was not based on a WTA rule.”[6]

Williams might claim that she is not bothered by the ban, and the chair umpire may have made a mistake in handing Cornet a code violation, but these incidents are indicative of a broader historical trend.[7]  The sport of tennis has faced many issues regarding the attire of the players, especially the female players.[8]

In 1949, Gertrude Moran played her first match at Wimbledon without a knee length skirt, which was considered the proper attire for female tennis players.[9]  At the time of Moran’s display, the All-England Club, the organization that runs Wimbledon, “decried [Moran’s] outfit and claimed [Moran] brought ‘vulgarity and sin into tennis.’”[10]

Nearly a decade after Moran’s incident at Wimbledon, in 1958, Karol Fageros wore gold underpants underneath her skirt to the French Open.[11]  This display got Fageros immediately banned from playing in Wimbledon of that same year allegedly because of her opponent’s potentially adverse reaction to her visible underwear.[12]  The All-England Club allowed Fageros to compete at Wimbledon when she agreed “to cover the gold up with white lace.”[13]

Next, in 1972, Wimbledon officials, “ordered [Rosemary Casals] to change out of the dress she” was wearing because, according to the officials, the dress violated the strict Wimbledon dress code due to the white dress having “purple letters stitched into it.”[14]

The most similar situation to Williams’ black catsuit occurred in 1985 when Anne White wore “an all-white bodysuit with long sleeves” to Wimbledon.[15]  Careful analysis suggests that the dress may have met the dress code of Wimbledon, which stated, “competitors must wear all-white, conservative attire.”[16]  However, after the match, White’s competitor, Pam Shriver, complained to officials that White’s bodysuit “had distracted her.”[17]  Upon review, the Wimbledon officials determined the bodysuit was “unfit for competition.”[18]

Organizations from the USTA and French Tennis Federation to your local tennis club have dress codes.[19]  The USTA requires “proper tennis attire . . . for all sanctioned USTA tournaments.”[20]  Wimbledon is even stricter with its guidelines, requiring players to “be dressed in suitable tennis attire that is almost entirely white and this applies from the point at which the player enter[s] the court . . ..”[21]

In addition, the WTA has seven pages in its rulebook solely dedicated to dress guidelines all female tennis players must comply with.[22]  Broadly, the rules demand players “dress and present themselves in a professional manner.”[23]  However, the rules have very specific requirements for identification on clothing from headbands, dresses, shoes, and even socks.[24]  If a player does not comply with these regulations, a “Chair Umpire, Referee, or Supervisor [may order the player] to change her attire or equipment immediately.”[25]  A player who fails to comply with an order to change can be fined or defaulted from a tournament.[26]

Currently, the players seem quite unbothered by the recent developments, especially compared to the general public.[27]  The players have, to a certain extent, accepted the current guidelines and play in accordance with them.[28]  Some people perceive tennis to have an elitist culture and issues with attire further add to those notions.[29]

In the end, the tennis organizations have the right to create whatever dress guidelines they see fit.[30]  It could be argued sex discrimination is at play; however, the written guidelines are generally uniform across gender.[31]  The WTA has specific guidelines for women, but the WTA is the governing tennis association for female players.[32] Problems arise at the grand slam events because there seems to be different standards in enforcing the uniform rules on female and male players.[33]

Eventually, stricter dress codes may affect the number of people who subject themselves to playing tennis.[34]  Within the last few decades, fewer American children are participating in sports due to the extremely high prices of youth sports.[35]  With stricter dress codes, tennis establishments could be making it more difficult for players of lower economic backgrounds to afford proper tennis attire.[36]

In addition, fewer parents may be willing to allow their children to participate in tennis because of the perceived detrimental effect of officials criticizing their children about attire, even when they are following the letter of the dress codes.[37]  Over the years, the media has called out players as young as fifteen years old for their “outrageous tennis outfits.”[38]  Photographs show some of these outfits are labeled as outrageous simply due to the young teenagers’ choice of hair style.[39]

The organizations claim the dress codes are all about respecting the game.[40]  However, isn’t winning twenty-three major championships and making tennis relevant in the world of dominant spectator heavy organizations such as the National Football League, National Basketball League, Major League Baseball, and the Champions League more important to the survival of the game than the outfit the player wears?[41]

[5] See Simon Briggs, US Open Forced to Clarify Rules After Alize Cornet Is Punished for Removing Shirt on Court, Telegraph UK (Aug. 29, 2018), https://www.telegraph.co.uk/tennis/2018/08/29/us-open-accused-double-standards-alize-cornet-punished-removing/ (discussing how umpire’s snap decision seemed “absurdly petty” because Cornet’s sports bra was only seen for a couple of seconds and how incident is embarrassing for USTA given that “chief executive Katrina Adams is outspoken in her views about gender equality”).

[6] See id. (“Crucially, though, the handbook never says that an official ‘change of attire’ break is required for any player who wants to adjust their clothing.”).

[7] See id. (acknowledging potential mistake due to “vague nature of the WTA’s rules”); Lisa Ryan, A Brief (and Frustrating) History of People Policing Women’s Tennis Outfits, The Cut (Aug. 28, 2018), https://www.thecut.com/2018/08/womens-tennis-outfits-convtroversy-history.html (reporting issues with tennis attire at different points in history);  see also Opehli Garcia Lawler, Serena Williams was Unfazed by the French Ban on Her CatSuit, The Cut (Aug. 26, 2018) https://www.thecut.com/2018/08/serena-williams-not-bothered-by-french-ban-on-nike-catsuit.html (“Everything’s fine, guys . . . when it comes to fashion, you don’t want to be a repeat offender”).

[10] Ryan, supra note 7 (reporting that not only was Moran’s skirt shorter than the norm but her underwear was also showing).

[21] Wimbledon, Clothing and Equipment (finding everything must be white including soles of player’s shoes).

[29] See Nittle, supra note 9 (discussing how Williams and her sister have been criticized since beginning of careers for outfits and hairstyles).

[37] See generally Venus and Serena Williams in Pictures: Their Outrageous Tennis Outfits Through the Years,The Telegraph UK (last visited Sept. 18, 2018), https://www.telegraph.co.uk/sport/picturegalleries/8268556/Venus-and-Serena-Williams-in-pictures-their-outrageous-tennis-outfits-through-the-years.html?image=8 (judging Serena and Venus for their attire since they arrived onto the tennis scene in the 1990s).

[43] See generally Lawler, supra note 7 (suggesting tennis may be getting in its own way).

[44] See generally Jim Caple, Back in Compton, “They Love Their Venus and Serena”, ESPNW (Feb. 13, 2017) http://www.espn.com/espnw/news-commentary/article/13524355/back-compton-love-their-venus-serena (commenting on influence Williams sisters have had on tennis especially in hometown of Compton).