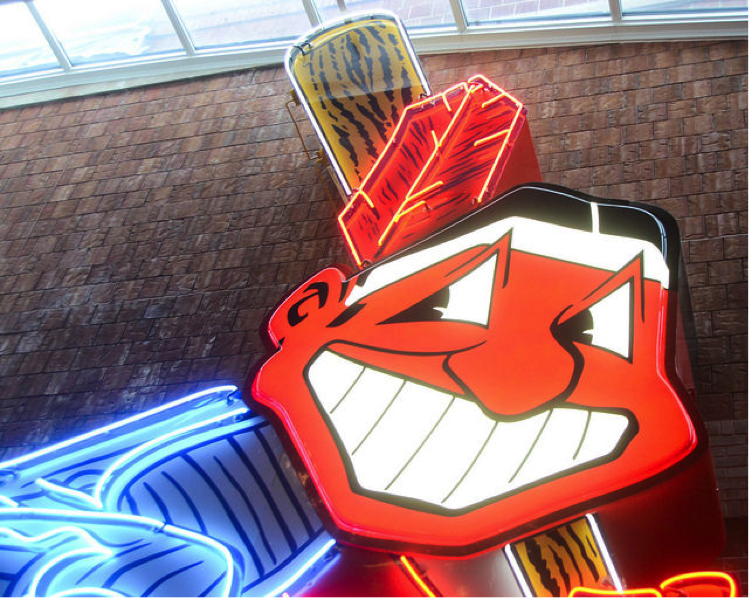 After several decades of facing criticism and protests over the polemic Chief Wahoo trademark, the Cleveland Indians have conclusively decided to remove the logo from their hats and uniforms starting in 2019.[1]  In 1947, Walter Goldbach, a 17-year-old, designed the logo after he received a request from Cleveland owner, Bill Veeck, who was seeking a new symbol for the team.[2]  The current version of Chief Wahoo dates back to 1951, after changes were made to give him red skin and a smaller nose.[3]  The decision to discontinue use of this logo on team hats and uniforms comes over sixty years later–just before Cleveland will host the 2019 All-Star Game.[4]  While this decision has been applauded by a variety of individuals and organizations, others have asked why Cleveland does not immediately end the use of Chief Wahoo today.[5]

The Issues with Chief Wahoo

There have been numerous issues involving symbols and team names related to Native Americans in several sports leagues, such as Major League Baseball (MLB), the National Football League (NFL), and the National Collegiate Athletic Association (NCAA).[6]  While there have been efforts to phase out usage of racist depictions of Native Americans in sports, any attempts have been relatively slow in effectuating change.[7]  In Canada, Cleveland’s logo was unsuccessfully challenged by Douglas Cardinal.[8]  Mr. Cardinal sought a court injunction to stop Cleveland from using the logo and the name “Indians” while they were playing playoff games in Toronto.[9]

With regard to Chief Wahoo, there are two major issues with this depiction of a Native American man: his red skin and the feather placed in his hair.[10]  Calling a Native American a “redskin” started in the middle of the nineteenth century and has been considered a slur since at least the 1970s.[11]  This has been an ongoing issue between the NFL and protestors against the name of the Washington Redskins and their logo depicting a Native American man.[12]  The Washington Redskins and the Cleveland Indians logos not only depict Native Americans with red skin, but inaccurately showcase their culture.[13]  For example, feathers in Native American culture are important to their traditions and practices and carry significant meanings.[14]  However, the Cleveland Indians’ logo is inaccurate due to the fact that chiefs wear large headdresses and not simply a single feather.[15]

Steps toward eliminating Chief Wahoo began in 2016, when Cleveland changed Chief Wahoo to be their secondary symbol.[16]  While emphasizing their “C” logo, they did keep a smaller symbol of Chief Wahoo on their sleeves and hats, before eventually making this decision to remove him from the field completely.[17]

One area that concerns the team’s further usage of Chief Wahoo involves trademark protections.[18]  As a trademark, the Cleveland Indians and MLB wish to keep possession of Chief Wahoo while continuing to sell authorized merchandise.[19]  If they were to cease use completely, Cleveland and MLB would jeopardize their sole ownership and others would be able to start selling products that have Chief Wahoo on them, since trademark rights are determined and sustained by “actual use.”[20]  Many are interested in Chief Wahoo merchandise due to the history and controversy behind the mascot, as evidenced by increasing prices on shopping websites like eBay.[21]  While Chief Wahoo will no longer continue to be visible on the field, products that contain the image will continue to be available in Cleveland and Canada.[22]

While this appears to be a step in the right direction, many are concerned with Cleveland and MLB continuing to generate revenue from using a racist depiction of a Native American.[23]  With regard to the fans, it is not likely that the removal of Chief Wahoo from the field will stop fans from painting their faces red or dressing and acting in a way that they believe is related to Native Americans.[24]  This will be even more apparent with fans who have long supported the use of the logo and perpetuate its use after Chief Wahoo is no longer visible on the field–and perhaps even after Cleveland removes Chief Wahoo from their merchandise (if ever).[25]  Nonetheless, the National Congress of American Indians has commended the upcoming change, seeing the MLB eliminating Chief Wahoo as a potential example to other sports leagues in recognizing the demands of Native Americans.[26]

[22] See Maury Brown, Cleveland Indians Are Removing Chief Wahoo From Field But Have Incentive To Keep Him On Shelves, Forbes (Jan. 29, 2018, 2:38 PM), https://www.forbes.com/sites/maurybrown/2018/01/29/while-cleveland-indians-retiring-chief-wahoo-new-products-with-him-not-going-away/#38d3a88f2dc3 (stating geographical availability of merchandise with Chief Wahoo on it).