From the Court to the Courtroom: Louisville Basketball’s Biggest Rival Might Be its Former Head Coach 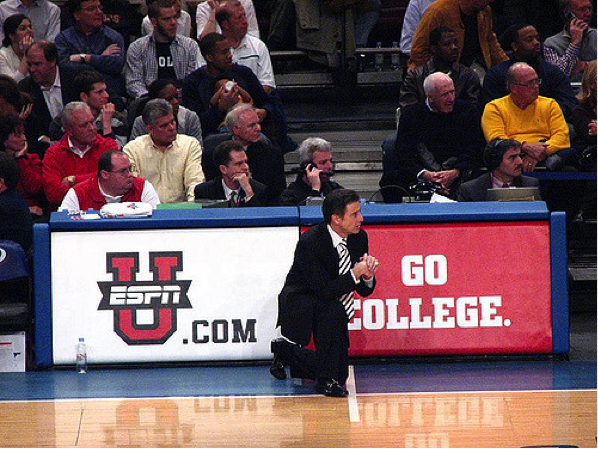 At the center of the lawsuits initiated by Pitino and the University of Louisville is the language contained under the “Termination for Just Cause” provision of Pitino’s contract.[7]  Under basic employment law, “[t]ermination for [just] cause provisions provide for circumstances under which the university may terminate the coach.”[8]  If a university fires a coach for cause, “the university is relieved of its duty to further provide the coach with compensation and benefits due under the contract.”[9]  Included in Pitino’s contract was a termination for just cause provision, which provided four instances in which Louisville had the right to fire Pitino and withhold any future compensation.[10]  In relevant part, the University could find “just cause” if a major NCAA violation occurred that damaged the school in a material fashion, or if Pitino’s willful misconduct led to “disparaging media publicity . . . that damage[d] the good name and reputation of [Louisville].”[11]

Pitino’s complaint first alleges that the University of Louisville breached his contract by firing him without showing legal cause.[12]  In support of its decision to fire Pitino, the University of Louisville argued that Pitino’s misconduct gravely harmed its basketball program and the resulting negative publicity disparaged the University.[13]  The University claimed that this misconduct justified terminating Pitino for cause because he was involved in, or at least had knowledge of, the unlawful recruiting efforts being used to induce recruits to commit to the school.[14]  Additionally, the University stated that Pitino failed to notify the compliance office that Christian Dawkins, an investment advisor indicted in the FBI probe, was on campus with one of the recruits.[15]  Despite these findings, Pitino contends that the University has failed to show that he engaged in misconduct serious enough to relieve the University “of any obligation to pay the remainder of the contract.”[16]  The complaint asserts that Pitino never played any role in paying recruits to attend Louisville, which is evidenced by the fact that the government never produced “any recorded statements of Pitino admitting to wrongdoing.”[17]  In regard to Dawkins, the complaint refutes the University’s contention that Pitino had a reporting obligation, because Pitino did not know Dawkins was an agent; therefore, Pitino did not have enough knowledge of Dawkins to trigger the duty.[18]

In addition to a breach of contract claim, the complaint further alleges that the process through which Pitino was fired was ineffective, as it denied him sufficient notice and process.[19]  In support of this contention, Pitino asserts that the decision to place him on administrative leave “effectively fired him” two days after the FBI released its report.[20]  Such a rash decision, Pitino argues, was in violation of his contract, which provides that he would be given an opportunity to be heard upon a finding of just cause.[21]  The complaint further cites the University’s failure to conduct an independent investigation or to uncover any additional facts as additional evidence of the process’ deficiencies.[22]

How Will It End?

On January 8, 2018, U.S. Magistrate Judge Colin H. Lindsay ordered attorneys from each party to meet by February 8 to discuss a possible settlement of the two lawsuits.[29]  While most commentators originally believed that both sides would opt for settlement rather than going to trial, the parties were ultimately unable to reach an agreement.[30]  As such, a discovery deadline has been set for May 15, 2019, with additional motions becoming due on June 30, 2019.[31]  Given the parties’ inability to reach an agreement, it appears that the Pitino saga will continue well into 2019.[32]

[8] See Martin J. Greenberg, Termination of College Coaching Contracts: When Does Adequate Cause to Terminate Exist and Who Determines its Existence?, 17 Marq. Sports L. Rev. 197 (2006) (defining “termination for just cause”).

[11] See id. (discussing relevant instances in which University could find just cause).  For an NCAA violation to be considered cause, it must be a Level I or II violation.  Id.  Additionally, the University could fire Pitino for just cause if there was “a material violation of [the] Employment Contract or refusal or unwillingness to perform [the] Contract in good faith and to the best of [Pitino’s] abilities.”  Id.  Further, Pitino could be fired for just cause for “(a) dishonesty with [the University], (b) acts of moral depravity, (c) conviction of a felony or employment- or drug-related misdemeanor, or (d) intoxication or being under the influence of a psychoactive substance when performing duties under [the] [c]ontract . . . .”  Id.

[14] See id. (reporting University’s reasoning for firing Pitino).  The University also alleged that Pitino “failed to monitor and exercise sufficient oversight over his program” stemming from an NCAA investigation conducted in June 2017, that found an assistant coach had paid escorts and prostitutes to perform for recruits.  Id.  As a result of this scandal, the NCAA suspended Pitino for five conference games.  Id.

[18] See id. (reporting Pitino’s contentions).  Additionally, regarding the escort scandal from June 2017, Pitino asserted that he was not aware of or involved in the issue.  Id.

[21] See Employment Contract, supra note 7 (“Employer has the right to terminate this Employment Contract for Just Cause . . . [but] prior to such action, Employee shall be given ten (10) days’ prior written notice and an opportunity to be heard”).

[27] See id. (reporting no amount was specified in complaint).