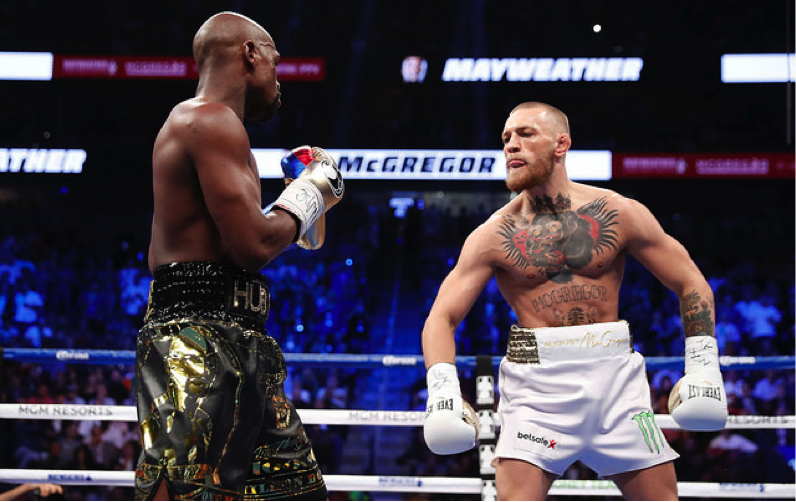 Recently, one of the most anticipated boxing matches of the century took place in Las Vegas between boxing legend Floyd Mayweather and UFC superstar Conor McGregor.[1]  There was doubt the fight would ever occur, and it garnered so much attention in the ring in part because for the first time ever, the two biggest names in the most popular combat sports faced off against one another.[2]  Mayweather, a natural boxer, was heavily favored and won the fight in the tenth round, but to many the fight was far more entertaining than it ever should have been, given that McGregor had never boxed professionally.[3]

Despite the entertaining action, not all viewers were happy with how the night went, as the main event was delayed because of outages of the pay-per-view stream and because of connectivity issues with the stream throughout.[4]  In the days following the fight, Showtime Networks, the main provider of the fight, said that it had “received very limited number of complaints overall,” and that it would be issuing full refunds of $99.99, the cost to stream the fight in HD, to customers it could verify had issues.[5]

The offer was not enough, for some, including one customer, Zack Bartel, who decided to take legal measures in the form of a class action lawsuit.[6]  The lawsuit, which was filed in the United States District Court for the District of Oregon, seeks whichever is greater of actual damages from Showtime or $200 in statutory damages.[7]

Bartel’s Complaint alleges he paid Showtime, the defendant, “$99.99 to stream the Mayweather fight live on its app in HD, as defendant’s advertisement promised.”[8]  In his Complaint, Bartel provided a screen shot of his purchase, carried out over iTunes, to stream the fight in “1080p resolution and at 60 frames per second.”[9]  Bartel provided three screenshots in his Complaint to show the issues he was having, and to demonstrate he did not receive the product as advertised.[10]  Bartel alleged that “[i]nstead of being a ‘witness to history’ as defendant had promised, the only thing plaintiff witnessed was grainy video, error screens, buffer events, and stalls.”[11]

Bartel also alleged that he was able to verify the issue was with Showtime and not his own internet connection by testing other streaming services, like Netflix, which he was still able to view in “crystal clear HD.”[12]  To allege he was not the only one experiencing this issue, Bartel also provided a page of screen shots from Twitter, where “he saw hundreds of complaints” related to other customers having issues with streaming.[13]

Bartel’s Complaint alleged that Showtime “rushed its pay-per-view streaming service to market, without securing enough networking bandwidth to support the number of subscribers who paid to watch the fight.”[14]  Bartel alleged that as a result, Showtime “intentionally misrepresented the quality and grade of video consumers would see using its app, and knowingly failed to disclose that its system was defective with respect to the amount of bandwidth available, and that defendant’s service would materially fail to conform to the quality of HD video defendant promised.”[15]

As a part of the Oregon class, Bartel included any Oregon consumers who had the same issues that he alleged as a part of his Complaint when they bought the fight and tried to stream it.[16]  Bartel did not provide an exact figure on how many consumers were affected, but he alleged “[t]he exact number of aggrieved consumers in Oregon can be determined based on defendant’s sales records and data.”[17]

Bartel alleged that Showtime willfully violated several provisions of the Oregon Unlawful Trade Practices Act (“UTPA”) and that the “violation is common to the Oregon Class.”[18]  Bartel claimed that the Oregon class is “entitled to recover actual damages or $200 statutory damages, whichever is greater, interest and fees and costs under ORS 646.638,” as well as punitive damages under the same statute.[19]  In a second claim, Bartel also alleged he “and the Oregon class are entitled to restitution based on defendant’s unjust enrichment as alleged in [the] complaint.”[20]

Laws Involved in the Claim

Federal Rule of Civil Procedure 23 governs class actions like the one brought by Bartel.[21]  The main statute involved in Bartel’s claim is § 646.608 of the Oregon Revised Statutes, and Bartel alleged violations under several subsections of the statute.[22]

Under § 646.608 and the relevant subsections, a person engages in unlawful trade practices by causing a likelihood of confusion as to the source or certification of goods or services, representing goods have characteristics or qualities they do not have, representing goods are part of a particular quality if they are of another,  advertising goods with the intent not to provide them as advertised, or when, concurrent with the delivery of goods, the seller “fails to disclose any known material defect or material non conformity.”[23]  Oregon Revised Statute § 646.638 is the statute that would allow for the class to recover here.[24]

To establish a prima facie case of unjust enrichment, Bartel would need to show that there was “(1) a benefit conferred, (2) awareness by the recipient that she has received the benefit, and (3) it would be unjust to allow the recipient to retain the benefit without requiring her to pay for it.”[25]

Given that the complaint was filed so recently, it could be some time before the case makes any progress, as Showtime has twenty-one days from the time of being served to answer.[26]  The complaint is certainly not thin, and will likely meet the pleading standards under Federal Rule of Civil Procedure 8(a) were Showtime to try and dismiss the complaint under Rule 12(b)(6) for failure to state a claim.[27]

Because the fight cost $99.99 and the statutory maximum is $200, the lawsuit amounts to Bartel and the class seeking roughly an additional hundred dollars for their inability to watch the fight at their desired quality.[28]  Thus, if the claim gets past the pre-trial stage and anywhere close to being heard on the merits, it could likely be the case that it is easier for Showtime and in the company’s best interest to simply settle the matter.  One allegation of Bartel’s was that Showtime’s misrepresentation was intentional, so rather than going through a drawn-out and potentially costly discovery and litigation, Showtime could find itself in a positon where it is easier to settle with the class and put this matter behind itself.[29]  Were Bartel to succeed on his claim and prove that Showtime intentionally misrepresented itself in offering the fight, it could do further harm to its reputation and credibility when it comes time to offer future events, a risk it may be more interested in avoiding by simply paying Bartel and the Oregon class.

[1] See Telegraph Sport, Conor McGregor Fights Floyd Mayweather This Evening: Why Is It Happening?, Telegraph (Aug. 27, 2017, 5:27 AM), http://www.telegraph.co.uk/boxing/2017/08/26/conor-mcgregor-fights-floyd-mayweather-evening-happening/ (providing background on fighters, money at stake in fight, and why each fighter may have agreed to fight one another).

[2] See Luke Brown, The Story of How Floyd Mayweather and Conor McGregor’s Trash Talk Turned Into the Most Lucrative Fight in History, Independent (Aug. 26, 2017), http://www.independent.co.uk/sport/general/boxing/mayweather-mcgregor/how-floyd-mayweather-vs-conor-mcgregor-fight-happened-trash-talk-live-fight-stream-what-time-when-a7914601.html (discussing logistics behind putting together such unusual fight).

[3] See Ben Baskin, After Months of Hype, Mayweather and McGrego Deliver a Boxing Spectacle, Sports Illustrated (Aug. 27, 2017), https://www.si.com/boxing/2017/08/27/after-months-hype-mayweather-and-mcgregor-deliver-boxing-spectacle (discussing details of what happened during fight, including reactions from fighters themselves).

[5] See Todd Spangler, Mayweather-McGregor: Showtime Will Issue ‘Full Refund’ to Viewers It Verifies Couldn’t Watch the Fight, Variety (Aug. 28, 11:48 AM), http://variety.com/2017/digital/news/mayweather-mcgregor-showtime-full-refund-streaming-problems-1202540597/ (discussing how UFC’s Fight Pass service had problems as well, and had not offered refunds yet but rather commented it would be reviewing refund requests “on a case-by-case basis”).

[6] See Des Bieler, Showtime is Sued Over Streaming Problems of Mayweather-McGregor Fight, LA Times (Aug. 29, 2017, 12:25 PM), http://www.latimes.com/business/hollywood/la-fi-ct-showtime-mayweather-mcgregor-20170829-story.html (discussing that lawsuit had been filed and basics of its contents).

[10] See id. at ¶ 5 (“To his extreme disappointment and frustration, plaintiff (and thousands of other consumers) quickly learned that defendant’s system was defective and unable to stream the Mayweather fight in HD as defendant had advertised.”).

[12] See id. at ¶ 6 (alleging Bartel also “took a speed test of his Internet just to make sure the issues weren’t being caused by a bad connection,” and providing screenshot showing download speed of 55.90 Mbps).

[14] Id. ¶ 11 (describing mechanics and technology behind streaming services such as Showtime to support claim that Showtime “knew and should have known its system wasn’t able to conform to the qualify [sic] defendant promised its customers, based on defendant’s available bandwidth and subscriber numbers”).

[16] See id. ¶ 12 (including Oregon consumers who “[v]iewed defendant’s app advertisement on iTunes” and paid to stream it, but then were unable to view the fight live “in HD at 1080p resolution and at 60 frames per second, and who experienced ongoing grainy video, error screens, buffer events, and stalls instead”).

[19] Id. at ¶ 22 (alleging Showtime’s violation of UTPA “was reckless, in pursuit of profit, and constituted a wanton, outrageous and oppressive violation of the right of Oregon consumers to be free from unlawful trade practices,” thus entitling class to punitive damages as well).

[21] See Fed. R. Civ. P. 23 (requiring, for example, that “[t]he class is so numerous that joinder of all members is impracticable” and “[t]here are questions of law or fact common to the class”).

[24] See Or. Rev. Stat. § 646.638(1) (“[A] person that suffers an ascertainable loss of money or property. . . as a result of another person’s willful use or employment of a method, act, or practice declared unlawful under ORS 646.608, may bring an individual action in an appropriate court to recover actual damages or statutory damages of $200, whichever is greater.”).

[25] Cron v. Zimmer, 255 Or. App. 114, 130 (2013) (holding plaintiffs had presented sufficient evidence to state claim of unjust enrichment against their sister who was personal representative of their mother’s estate).

[29] See id. at ¶ 11 (“Defendant intentionally misrepresented the quality and grade for the video, and knowingly failed to disclose that its system was defective with respect to the amount of bandwidth available.”).