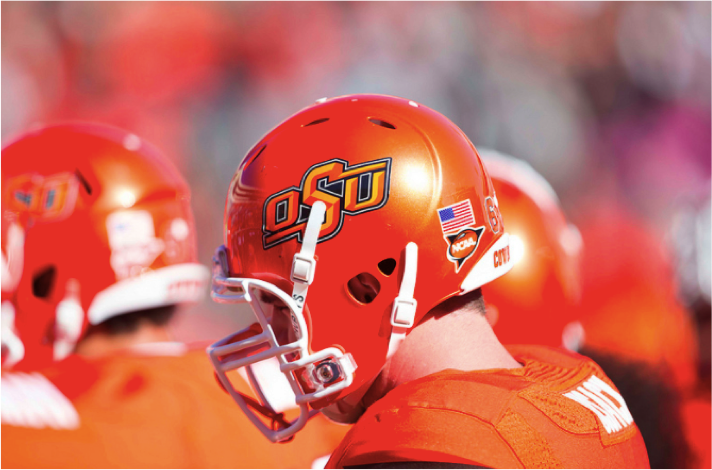 Oklahoma State University and Ohio State University are poised for an off-the-field matchup that will determine which school “has the claim to being the real ‘OSU’ in college sports[.]”[1]  However, this claim would be limited to the world of trademark apparel rights.[2]

For the past thirty years, Oklahoma State and Ohio State have both maintained “OSU” trademarks through a “concurrent usage agreement,” but only for use related to sports events, recreation programs, entertainment, and education.[3]  This means that currently the trademark does not belong exclusively to one school.[4]

In February, Ohio State filed an application with the United States Patent and Trademark Office “to use ‘OSU’ on ‘clothing and headgear, namely, t-shirts, shirts, hats, and baseball caps.’”[5]

In July, Oklahoma State announced that it intended to oppose Ohio State’s application for the “OSU” apparel trademark.[6]  The school had until the end of August 2017 to file its official objection.[7]

The Governing Law & Its Application

While Congress provides a framework in the Lanham Act, trademark law in the United States “does not create true property rights.”[8]  There are two bases for rights in a trademark: “public and commercial use of the mark, and [] consumers’ association of the mark with the source of the goods or services sold in connection with it.”[9]

To establish a trademark, consumers must see it as a “source indicator,” rather than simply the name of a product.[10]

While the “OSU” apparel mark fulfills the public and commercial use requirement, as evidenced by the existing sports event, recreation program, entertainment, and education trademarks, it is the source indicating function that poses a problem.[11]

If the United States Patent and Trademark Office awards the “OSU” apparel mark exclusively to Ohio State, the school would likely fail as a “source identifier” in the seventeen states where the Oklahoma State event and education trademarks currently exists.[12]  For this reason, the most realistic and proven solution is for the two schools to reach a concurrent usage agreement as it applies to the “OSU” apparel trademark.[13]

While the outcome of this matchup remains to be seen, it is likely that Ohio State and Oklahoma State will come to an agreement regarding how the “OSU” trademark will be awarded and applied to apparel in the United States.[14]  At least, that is the hope of the two schools involved.[15]

Failure to reach a concurrent usage arrangement for the “OSU” apparel mark will only serve to create confusion, especially in the respective states where Ohio State and Oklahoma State are most popular.[16]

Ultimately, an agreement between Ohio State and Oklahoma State would leave “the claim to [which school is] the real ‘OSU’ in college sports” unresolved.[17]

[4] See Patterson, supra note 1 (noting that “[t]he trademark has been shared through concurrent usage agreements with Oregon State included in those.  The agreements take the federal trademark and award it on a state-by-state basis, and in the case of Iowa a county-by-county basis—according to the Dispatch, Oklahoma State’s trademark applies to 54 western counties and Ohio State’s applies to 45 eastern ones”).

[8] See Uli Widmaier, Use, Liability, and the Structure of Trademark Law, 33 Hofstra L. Rev. 603, 610 (discussing structure of United States trademark law). See also 15 U.S.C. § 1127 (defining “trademark” as “any word, name, symbol, or device, or any combination thereof— (1) used by a person, or (2) which a person has a bona fide intention to use in commerce and applies to register on the principal register . . . to identify and distinguish his or her goods, including a unique product, from those manufactured or sold by others and to indicate the source of the goods, even if that source is unknown”).

[9] See id. (noting that trademark rights “are contingent on those two elements”).

[10] See id. at 611 (stating that if consumers believe trademark is name of product, mark has become generic and cannot be protected).

[14] See id. (assuming that “new battle lines will be negotiated and drawn”).

[17] Patterson, supra note 1 (posing question as to which school “has the claim to being the real ‘OSU’ in college sports”).