Did the CFL Really Know Nothing?: The Likelihood the Football League to the North Will Face Same Settlement Consequences as the NFL 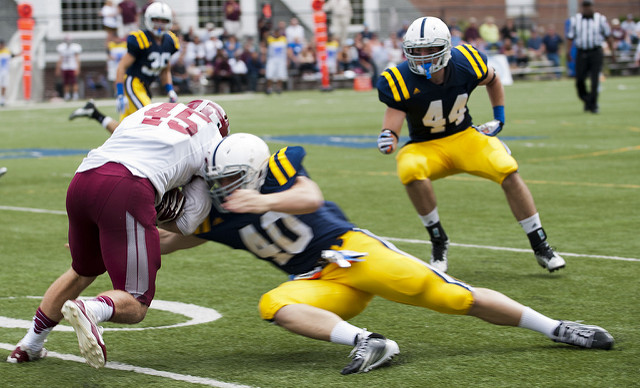 Is it possible that football is as dangerous as it is popular?[1]  In 2016, the National Football League (NFL) settled a class action lawsuit with hundreds of retired NFL players, by which these players will be compensated for their numerous concussion-related injuries.[2]  The lawsuit alleged the NFL either actively concealed or knowingly ignored evidence of the risks of continuing to play football with repeated head trauma.[3]  While the NFL was attempting to settle its lawsuit, a similar suit was filed in Canada in 2015.[4]

The Canadian lawsuit has many similarities to the NFL lawsuit, including the defendants, who are the Canadian Football League (CFL) as well as its Commissioner, doctors who worked with the teams, and a neuroscience center.[5]  In addition, the allegations of the Canadian lawsuit are similar, in that retired CFL players accused the Commissioner and the league of being aware of the harmful effects of repeated head injuries, like developing CTE, and contended that the Commissioner and league kept that information from the players.[6]  While there are many factual similarities between the two cases, there are multiple differences in the laws of both countries; therefore, the CFL lawsuit could end in a much different result than the large settlement between the NFL and its retired players.[7]

An example in the difference of laws is the Canadian law requiring employees and employers in a union to submit to arbitration, not the courts.[8]  In fact, the Canadian court system already enforced this law on another suit against the CFL.[9]  Because the Canadian court already enforced this rule and sent the issue out of the court system, the court could very well repeat their decision in the class action suit.[10]  This is a major difference from the operations of the United States court system, because even though there were motivations to settle, settlement was not required and trial could have been an option.[11]

Another major difference is the attitude towards settlement amounts in the two court systems.[12]  The United States court system does not take issue with large settlements, especially from large organizations such as the NFL.[13]  The Canadian court system operates differently and is reluctant to give out or approve large settlements.[14]  In fact, Canadian courts follow a Commercial Arbitration Act which attempts to limit the amount of award plaintiffs receive in arbitration by requiring the amount be calculated only by matters of law.[15]

Another factor for considering whether or not CFL will enter into a settlement similar to the NFL is its ability to pay.[16]  The NFL’s salary is extensively larger than the CFL; for example, the NFL recently extended a television deal for $450 million dollars while the CFL just made a television deal for only thirty million dollars.[17]  It is likely that the CFL will pay some amount in arbitration; however, it is unlikely to be close to the amount the NFL is going to pay.[18]

When the CFL lawsuit continues it will likely be forced to arbitrate, as per Canada’s laws; however, it is equally likely that the similarities between the facts of both the NFL and CFL cases will affect arbitrator’s opinions of how much the retired players should be awarded.[19]  While the retired players are likely to receive some form of compensation, it is very unlikely that it will be as much as the NFL can give.[20]

[14] See Wiecek, supra note 7 (observing small likelihood that Canadian courts would give out large settlements to plaintiffs, especially for actions with “inherent risk[s]”).

[18] See Wiecek, supra note 7 (“It’s worth noting Canadian courts are much more reluctant to hand out big-money settlements than those in the United States.”)