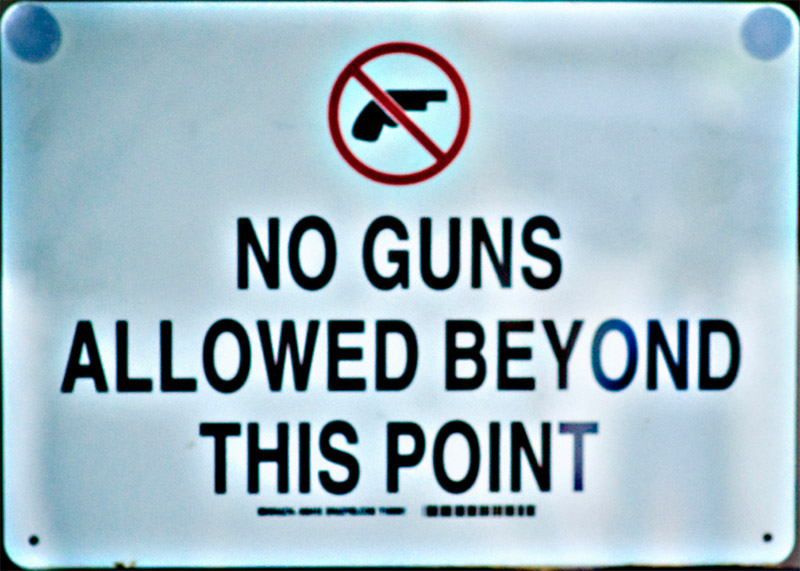 Airports are stressful; remembering to bring a passport and boarding pass, and comply with TSA regulations can be a challenge for most travelers.  For Eagles linebacker Nigel Bradham, the struggle includes remembering to remove firearms from carry-on luggage.[1]  Bradham was arrested in October 2016 after he brought his loaded handgun through Miami International Airport, and even though Bradham had a concealed weapons permit, he was charged with a second-degree misdemeanor.[2]  Bradham is hardly an outlier with regards to professional athletes travelling with concealed weapons; Pittsburgh Steelers quarterback Ben Roethlisberger estimated that seventy-five percent of NFL players own guns, and best estimates hold this percentage to be consistent with players in the NBA and MLB as well.[3]  Although the most cited reason for athletes owning guns is the need for protection, recent and developing case law has stated a fear for one’s safety is not enough to warrant carrying a concealed weapon.[4]  League policy needs to address this development and enforce these policies.

Is Sports Culture a Gun Culture?

There has been a spate of gun charges tied to professional athletes in recent years.[5]  The more notable of these incidents and charges have made headlines, bringing negative attention to the players and provoking ire against the leagues.[6]  However, there is a real concern amongst the players for their safety, given their notoriety and wealth.[7]  As carry permits are issued under state law, many athletes will meet with their respective security and legal personnel to coordinate travel and review updates to gun laws in the states to which they will be traveling.[8]

While athletes’ concerns for their safety may be well-founded, leagues have created policies to address and hopefully reduce the gun ownership.[9]  The NFL was the first professional sports league to create a formal policy addressing gun ownership, but it is at best a strongly-worded opinion and otherwise an incentive for players to surreptitiously acquire guns.[10]  As far as enforcement goes, former NBA Commissioner David Stern suspended two players for brandishing unloaded weapons during a locker-room confrontation during his tenure.[11]  While the NFL policy involves league guidelines and the latter NBA case involved players who were in clear violation of league rules, many players still feel the need to protect themselves, and do so by carrying licensed guns.[12]  However, there are boundaries with the Second Amendment and concealment with concern for personal safety is one of these areas.[13]

In June 2016, the United States Court of Appeals for the Ninth Circuit held in Peruta v. County of San Diego that there is no Second Amendment protection for concealed weapons in public.[14]  After a long historical examination of laws restricting concealed weapons, the divided court concluded that “the Second Amendment right to keep and bear arms does not include . . . a member of the general public to carry concealed firearms in public.”[15]

The case turned on the interpretation of “good cause” as it is used for obtaining a concealed firearms permit.[16]  When applying for a concealed carry license, San Diego citizens must show “good cause” for wanting to carry a firearm.[17]  County sheriffs established what constitutes “good cause,” and in San Diego, good cause was defined as “a set of circumstances that . . . causes [the applicant] to be placed in harm’s way.  Simply fearing for one’s personal safety alone is not considered good cause.”[18]  Basically, in order to receive a carry permit in San Diego, one had to show that they were in immediate danger, such as having documented threats made against them or if they were a business owners who carry large amounts of cash; personal or familial protection on its own is not enough to warrant a permit.[19]

The court also distinguished one the most recent Supreme Court cases on gun rights, District of Columbia v. Heller.[20]  While Heller upheld a general right of the public to keep guns at home for self-defense, the Ninth Circuit pointed to the limited scope of the holding and further noted that Justice Scalia, author of the Heller opinion, had noted historical legal restrictions on concealed weapons in supporting the limited nature of the Second Amendment.[21]

Other federal courts are taking up this issue as well.  Last month, the United States Court of Appeals for the D.C. Circuit heard arguments on carrying handguns outside the home and if there is a right to how much the government can limit that right.[22]  Similarly, the D.C. Circuit court in Peruta was faced with what constitutes a “good reason” requirement for obtaining a carry permit. Other circuits have required that people seeking carry permits show “proper cause,” “justifiable need,” and “good and substantial reason.”[23]  All of these cases have used the heightened standard of intermediate scrutiny, that is, the requirements of the permits are “substantially related to an important governmental objective,” thus letting law enforcement decide who should be allowed a carry permit.[24]

The Stakes are Higher

Sports leagues are notorious for governing the conduct of their players. Fines are imposed on players for making harsh or insulting comments directed at fans or officials on social media sites.[25]  The NBA cleaned up its image (or rather, the image of its players) with the implementation of a required Player Dress Code.[26]  Similarly, with more federal courts limiting the ability of private citizens to carry guns in public simply for personal protection, leagues might consider clearer policies on traveling with guns and enforcement of penalties for those that do, even with a license. While the players’ Second Amendment rights are implicated, it is no different than the limitations on their First Amendment rights with regards to what they say on Twitter or the way they dress. While safety is a general concern, as NFL Commissioner Roger Goodell stated, “[i]f you’re going to go certain places and you feel unsafe, you probably shouldn’t be in that surrounding.”[27]
__________________________________________________________

[2] See id. (listing charges and stating Bradham was released later that day on a $500 bond).

[5] For an overview of these incidents, see infra notes 6–7 and accompanying text.

[6] See generally Jon Star, The 10 Most Idiotic Athletes with Guns, Bleacher Rep. (Apr. 6, 2010), http://bleacherreport.com/articles/374244-the-10-most-idiotic-athletes-with-guns# (listing 10 most notable and “idiotic” instances of athletes using guns, such as New York Giants receiver Plaxico Burress shooting himself in leg at a Manhattan club in 2008).

[7] See Nakia Hogan, Many Pro Athletes Carry Concealed Weapons while in Public, NOLA, (Mar. 28, 2009, 9:42 PM), http://www.nola.com/news/index.ssf/2009/03/many_pro_athletes_carry_concea.html (indicating there is real cause for concern following high profile incidents of athletes being targeted, such as Redskins safety Sean Taylor being murdered during home invasion in 2007).

[12] See Freeman, supra note 10 (stating many NFL players own guns out of concern for their safety and purchase them legally).

[13] For a discussion of the federal courts addressing personal safety and the Second Amendment, see infra notes 13–23 and accompanying text.

[15] Id. at 939 (quoting court’s refusal to recognize members of the public have a right to carry concealed weapons).

[16] Id. at 919–20 (stating case was brought out of counties’ definition of “good cause” for obtaining a carry license).

[21] Id. at 928 (analyzing Heller and questions it left open with regards to Second Amendment’s regulation of firearms by states).