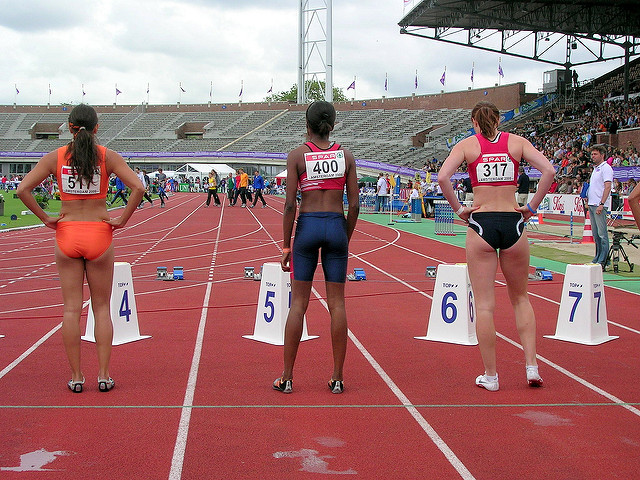 In the Rio Olympics, Caster Semenya, a South African runner, won the women’s 800 meters in a stunning 1:55.28.[1]  However, her hard-fought victory was heavily criticized because of one thing she could not control: hyperandrogenism, a condition that naturally causes an individual to produce extraordinarily high levels of hormones.[2]  Back in 2009, Semenya was not allowed to compete in the 800 meters at the World Track and Field Championships and had to submit to sex tests.[3]  The criticism surrounding her accomplishments centered on questions of the competition’s fairness and highlighted traditional arguments used against transgender (hereafter “trans”) athletes’ participation in sports.[4]  Trans athletes and athletes with naturally-occurring hormonal imbalances are criticized for having an “unfair advantage” over their competitors; however, scientific studies have debunked such suspicions, purporting trans women, as a result of hormone therapy in transitioning, “experience a decrease in muscle mass, bone density and other physical characteristics” – qualities considered “key components of athleticism.”[5]  Further, higher testosterone levels in men or women have not conclusively correlated with athletic success or consequent advantages.[6]

In the past, the International Olympic Committee (IOC) has required that trans athletes or athletes with naturally-occurring hormonal imbalances (such as hyperandrogenism) submit to embarrassing sex tests.[7]  Such tests included genital checks and chromosome tests – at one time, even handing out “femininity card[s]” to prove an athlete’s sex.[8]  In 2014, Dutee Chand, a female athlete with hyperandrogenism, challenged the International Association of Athletic Federations (IAFF) in order to compete in the Olympics despite her high testosterone levels.[9]  Chand was subjected to extensive sex-tests because the IAFF determined her physique to be too masculine.[10]  The IAFF then barred her from further competition when her testosterone levels came back too high.[11]  The following year, the Court of Arbitration for Sport (CAS) determined the IAFF’s hyperandrogenism rules to be invalid and discontinued the rules for two years.[12]  In the absence of any evidence from the IAFF that hyperandrogenic athletes have any competitive edge, these rules will be dissolved at the end of these two years.[13]

Against this backdrop, the IOC released guidelines in 2015 to “ensure insofar as possible that transgender athletes are not excluded from the opportunity to participate in sporting competition.”[14]  Transgender male athletes can compete in male events “without restriction.”[15]  Transgender female athletes, on the other hand, are only eligible to compete if the athlete (1) claims female gender identity, (2) has testosterone levels below 10 nmol/L for one year before competition, (3) maintains acceptable testosterone levels throughout competition, and (4) submits to testing to ensure compliance.[16]

In an arena where the playing field may never be truly, universally fair, the question still remains whether trans and hyperandrogenic athletes should still submit to invasive sex tests or be restricted to ‘playing with the boys.’[24]  With the CAS ruling regarding the IAFF’s hyperandrogenic rules, it seems more likely and reasonable that hyperandrogenic athletes should not have to endure such testing and ostracism because of substantial concerns regarding discrimination and privacy in addition to a lack of scientific evidence to support cries of unfair competition.[25]

[3] See Longman, supra note 2 (describing Semenya’s journey and difficulties as a female athlete with hyperandrogenism). For a discussion of sex testing in the Olympics, see infra notes 7–13 and accompanying text.

[4] See id. (highlighting key arguments against trans athletes and athletes with hyperandrogenism to compete with athletes of sex they are transitioning to or were born into respectively due to variable levels of testosterone).

[5] See Steven Petrow, Do Transgender Athletes Have an Unfair Advantage at the Olympics?,Wash. Post (Aug. 8, 2016), https://www.washingtonpost.com/lifestyle/style/do-transgender-athletes-have-an-unfair-advantage-at-the-olympics/2016/08/05/08169676-5b50-11e6-9aee-8075993d73a2_story.html (citing Joanna Harper, Race Times for Transgender Athletes, 6 J. of Sporting Cultures and Identities 1 (2015)) (noting arguments that trans athletes have an unfair advantage over competition because of high levels of testosterone).

[6] See Elizabeth M. Ziegler & Tamara Isadora Huntley, “It Got Too Tough to Not Be Me”: Accommodating Transgender Athletes in Sport, 39 J.C. & U.L. 467, 476 (2013) (describing “even though there is evidence of varying levels of hormones in transitioned individuals, there is a total lack of scientific data concerning whether transitioned athletes actually outperform naturally-born men and women on the playing field”); Longman, supra note 2 (noting “science has not conclusively shown that elevated testosterone provides women with more of a significant competitive edge than factors like nutrition, access to coaching and training facilities, and other genetic and biological variations”).

[9] See Juliet Macur, Fighting for the Body She Was Born With, N. Y. Times (Oct. 6, 2014), http://www.nytimes.com/2014/10/07/sports/sprinter-dutee-chand-fights-ban-over-her-testosterone-level.html (detailing Chand’s fight against IAFF to compete despite her testosterone levels).

[10] See id. (noting Chand was subject to sex tests such as an ultrasound, blood test to determine her testosterone levels, MRI, and gynecological exam).

[12] See id. (recalling CAS’ suspending of testosterone policy for two years because the Court was “unable to conclude that hyperandrogenic female athletes may benefit from such a significant performance advantage that it is necessary to exclude them from competing in the female category”).

[13] See id. (reflecting CAS’ ruling that unless IAFF can show otherwise, hyperandrogenic rules should be dissolved).

[20] See Tom Fordyce, Rio Olympics 2016: Caster Semenya’s History-Making Could Spell the End, BBC (Aug. 16, 2016), http://www.bbc.com/sport/olympics/37102204 (detailing how, despite Semenya’s birth as a girl, her sex was called into question due to “physical characteristics typically associated with both men and women”).

[21] See Padawer, supra note 7 (quoting Katrina Karkazis, a bioethicist from Stanford, who claims “if an athlete’s androgen test shows she has high testosterone, she must undergo the same gynecological exam that has existed for decades”).

They say the policy is not for testing gender – but saying that a hyperandrogenic woman can compete as a man, not a woman, inherently means they think she really is a man, not a woman. It brings back the debate around an athlete’s gender, publicly humiliating her in the process.

People come in all shapes and sizes…We don’t disqualify Michael Phelps for having super-long arms; that’s just a competitive advantage he has in his sport. We don’t regulate height in the WNBA or NBA…For as long as sports have been around, there have been people who have had advantages over others. A universal playing field does not exist.

[25] See Padawer, supra note 7 (quoting Semenya on privacy: “I have been subjected to unwarranted and invasive scrutiny of the most intimate and private details of my being”).

I was born a woman, reared up as a woman, I identify as a woman and I believe I should be allowed to compete with other women, many of whom are either taller than me or come from more privileged backgrounds, things that most certainly give them an edge over me.