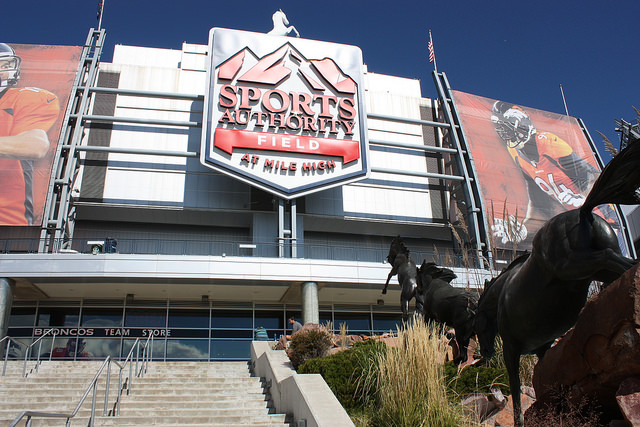 Each fall, thousands of football fans routinely flock to worship their team at locations such as Lincoln Financial Field, Met-Life Stadium, and AT&T Stadium.[1]  In 2016, the NFL faced one of these stadiums’ namesakes, Sports Authority, Inc., filing for bankruptcy.[2]  After months of waiting, a federal bankruptcy judge in Wilmington, Delaware, signed an order giving the Denver Broncos control of Sports Authority Field at Mile High Stadium’s (“Mile High Stadium”) naming rights.[3]  The agreement was a practical and simple solution that allowed all the involved parties to move forward in their desired direction.[4]

When Sports Authority declared bankruptcy in 2016, sports fans and outdoorsmen salivated at the idea of discounted athletic gear.[5]  Sports Authority quickly began selling smaller discounted items, but failed to find a buyer for the naming rights to Mile High Stadium in Denver.[6]   Sports Authority’s failure to sell the naming rights to Mile High Stadium would result in the Metropolitan Football Stadium District (“District”) being owed $20 million from the stadium sponsorship contract.[7]

Prior Attempts to Sell Naming Rights

Although the Denver Broncos are arguably the most famous tenant of Mile High Stadium, the Broncos do not own the stadium.[8]  Rather, Mile High Stadium is a publicly owned stadium operated by the District.[9]  Prior to the agreement, Hilco Streambank, a third party, had been put in charge of accepting bids for the naming rights and intellectual property of Sports Authority.[10]

Although rumors of interested buyers surfaced, Hilco Streambank failed to find a purchaser for the stadium naming rights contract.[13]  As a result, a federal bankruptcy judge in Wilmington, Delaware, signed off on a deal that would allow Sports Authority to get out of the deal and give control of the stadium naming contract to the Denver Broncos.[14]

On August 18, 2016, United States Bankruptcy Judge Mary Walrath accepted a proposal allowing the Denver Broncos to assume the naming lease that was previously held by Sports Authority.[15]  Under 11 U.S.C. § 365, the trustee in bankruptcy has the ability to “assume or reject any . . . unexpired lease of the debtor.”[16]

The judge accepted the proposal and its acceptance by the trustee, stating that it was “in the best interest of the [d]ebtors, their estates, and creditors.”[17]  The agreement states that the Broncos took over the August 2016 payment owed to the District for $3,601,890. [18]  Further, the agreement releases Sports Authority and all persons who had previously involved in Sports Authority from any future obligations relating to the stadium naming contract.[19]  Further, the agreement prevents the District from asserting any future claims against Sports Authority related to the naming rights contract.[20]

A trustee in bankruptcy has the job of collecting the debtors’ assets and dealing with creditors, but their interest is in settling the debtor’s debts, not in personal financial gain from the sale.[21]  The settlement enables those involved in the former company, which filed for Chapter 11 bankruptcy in early March and almost immediately began the process of closing stores, to begin finalizing bankruptcy proceedings.[22]

The NFL is immensely invested in its image not just as a sports league, but also as an American institution.[24]  This motivation was apparent in the failed bids for naming rights of legal businesses that are not universally accepted throughout the United States.[25]  Furthermore, the agreement that was reached will allow the Bronco’s and the District to work closely to search for the best sponsorship partner.[26]

Even though many native Bronco fans want the stadium to remain simply “Mile High Stadium,” the Broncos are confident that they will be able to find a suitable sponsor for the stadium.[27]  Historically teams that have brought back naming rights contracts from bankrupt sponsors have had no trouble finding a replacement, and often sign new sponsorship deals for larger sums.[28]  However, as it stands the settlement reached between Sports Authority and the Broncos enables all the involved parties to move forward in a direction that benefits their interests.

[6] See Northrup, supra note 4 (noting that stadium naming rights may have failed to find purchaser because NFL, District, and Broncos may not have accepted auction winner as being legitimate).

[25] See supra note 9 for discussion of marijuana related companies rumored to have bid on naming rights.