By Taking a Knee, Is Colin Kaepernick Actually Standing Up For First Amendment Rights? 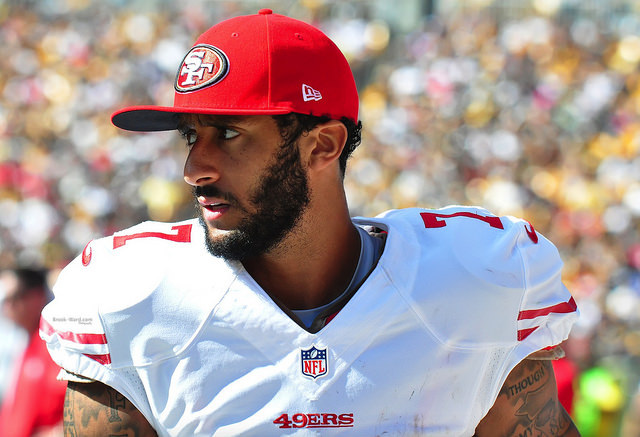 NFL quarterback, Colin Kaepernick, has made headlines in recent weeks about his decision to not stand during the national anthem at the start of 49ers games.[1]  In the wake of continued police brutality and inadequate responses, Kaepernick refrains from participating to actively protest the injustices committed against African-Americans and other persons of color at the hands of law enforcement throughout the country.[2]

“To me, this is bigger than football,” Kaepernick stated to NFL Media, “and it would be selfish on my part to look the other way.”[3]

How the Public Views Kaepernick’s Protest

Kaepernick has been both praised and criticized for his actions.[4] President Obama has shown support for the quarterback’s social activism, applauding Kaepernick’s sincerity, but has acknowledged how sensitive the topic can be as well.[5]  Donald Trump, on the other hand, has suggested that the United States may not be the best fit for the football star.[6]

Likewise, some commentators view Kaepernick as a champion of First Amendment rights, while others see him as “no First Amendment hero,” deeming his actions un-American.[7]

The First Amendment in the Private Sector

So how does the First Amendment relate to Kaepernick’s protest? Well, the short of it is, it does not.[8]

The First Amendment, in relevant part, states, “Congress shall make no law . . . abridging the freedom of speech.”[9]  By its very language, then, the First Amendment relates only to government regulation of speech and courts have confirmed as much.[10]

Accordingly, the First Amendment does not apply to private actors, including in private employment contexts, which is the case with Kaepernick.[11]

For the sake of argument, even if Kaepernick was a government or public employee, the NFL and 49ers were his government employers, and his protest was considered speech as opposed to conduct, requiring Kaepernick to observe the national anthem or punishing him for not would likely be unconstitutional under what is called the “Pickering-Connick test.”[12]

The Pickering-Connick test is a two-part inquiry in which plaintiff-employees must show that (1) they spoke as citizens “on a matter of public concern [and (2)] their free-speech interests outweigh their employer’s efficiency interests.”[13]

When contested speech is made pursuant to an individual’s official employment responsibilities, the speech is credited to the individual as an employee and not as a citizen and therefore is not under the First Amendment’s protection.[14]  In contrast, when the speech is merely related to an individual’s professional duties, it is credited to the individual as a citizen and is protected by the First Amendment.[15]  Standing for the national anthem is only marginally related to Kaepernick’s job as a football player, so his protest would be deemed citizen speech.

Next, speech relates to matters of public concern when it addresses any issue “of political, social, or other concern to the community.”[16]  Kaepernick’s protest is rooted in criticizing ongoing racial oppression through police violence—unambiguously a political and social matter of public concern.[17]

Having satisfied the first prong, a court then would balance an employee’s free speech interests and the employer’s efficiency interests for the second part of the Pickering-Connick test.[18]  Courts consider several factors, including whether the contested speech (a) “impairs discipline or harmony among co-workers,” (b) harms “close working relationships for which personal loyalty and confidence are necessary,” and (c) “interferes with the normal operation of . . . business.”[19]  Here, these factors would likely not carry enough weight against Kaepernick to require him to stand or discipline him for inobservance because his protest has not been disruptive to his team.[20]

Now, does this mean that private employers have complete control over their employees’ speech in the workplace and can discipline those who seemingly step out of line?  Absolutely not.

While private employers have substantial leeway in regulating employee speech and disciplining or even terminating an employee for a speech-related issue, especially in at at-will situation, they must be conscious of certain laws apart from the First Amendment.[21]  These include the National Labor Relations Act (“NLRA”), anti-discrimination and anti-retaliation laws, and whistleblower protections.[22]  Violating any of these laws will expose a private employer to civil liability.[23]

Furthermore, if the 49ers or the NFL contractually required or promulgated a rule that required all players to observe the national anthem, then Kaepernick could be disciplined for his inobservance.[24]  Unlike the NBA, however, the NFL does not have an explicit rule pertaining to the national anthem; nor does its collective bargaining agreement with players mention The Star-Spangled Banner.[25]  Instead, the NFL encourages players to stand.[26]

Even if the NFL had a national anthem requirement, enforcing the rule and disciplining Kaepernick would be unwise, further aggravating the controversy and likely bringing unwanted scrutiny upon the NFL.[27]

Kaepernick’s actions may make some uncomfortable, but that is the point.  His public protest calls upon Americans to confront the realities of police brutality and racial discrimination, the underlying issues that are so unsettling to him.[28]  Recognizing this, some, such as Castlemont High School’s football team, have joined in Kaepernick’s efforts, but critics remain in the name of patriotism.[29]

Bottom line: while he may not necessarily be a “First Amendment hero,” Kaepernick champions the spirit of this constitutional right.  He has the choice to sit, stand, or take a knee during the national anthem, so continue to do so in power.

[4] See, e.g., Inman, supra note 1 (noting how some are displeased with Kaepernick’s actions while others are supportive of his efforts); Matt Vasilogambros, Did Colin Kaepernick’s Protest Fail?, The Atlantic (Aug. 30, 2016), http://www.theatlantic.com/news/archive/2016/08/colin-kaepernick-protest-nfl/498065/ (discussing political figures’ and fellow athletes’ contrasting thoughts). For further discussion of the mixed responses to Kaepernick, see infra notes 5–7 and accompanying text.

[5] Kim Hjelmgaard, Obama Defends Kaepernick’s National Anthem Protest, USA Today (Sept. 5, 2016 12:38 PM), http://www.usatoday.com/story/sports/nfl/2016/09/05/obama-defends-kaepernicks-national-anthem-protest/89879478/ (commenting further that he would rather have “engaged” youth than ones who are uninvolved or apathetic).

[8] See U.S. Const. amend. I (limiting government explicitly from infringing on freedom of speech). For further discussion on the applicability of the First Amendment here, see infra notes 9–11 and accompanying text.

[11] See Winski, 973 F. Supp. 2d at 419 (“Private actors are typically not subject to [First Amendment] constraints . . .”); Jeannette Cox, A Chill Around the Water Cooler: First Amendment in the Workplace, Insights on Law and Society (2015), http://www.americanbar.org/publications/insights_on_law_andsociety/15/winter-2015/chill-around-the-water-cooler.html (clarifying that only government employees enjoy First Amendment protections in relation to their employers). But see Hudgens, 424 U.S. at 513 (mentioning that statutes and case law may provide similar protections against private actors for freedom of speech although relief does not arise from First Amendment in such cases).

[15] Compare Lane v. Franks, 134 S. Ct. 2369, 2375–82 (2014) (holding that director’s testifying at ex-employee’s trial for why he terminated employee was not part of director’s “official duties” and so could be constitutionally protected speech), with Garcetti, 547 U.S. at 417–25 (holding that contents of deposition memorandum for which district attorney was fired was part of “what he was employed to do” and thus was not constitutionally protected speech).

[18] See Hudson Jr., supra note 12, at 23 (describing prongs); see also Garcetti, 547 U.S. at 418 (clarifying that inquiry is whether government employer had sufficient reason for not treating employee same as member of public).

[22] See Cox, supra note 11 (reviewing speech protections that are be available to private employees and noting that some states, including California and New York, have statutes that limit “speech-related terminations.”); Freedom Of Speech In The Workplace: The First Amendment Revisited, FindLaw, http://corporate.findlaw.com/law-library/freedom-of-speech-in-the-workplace-the-first-amendment-revisited.html (last visited Sept. 22, 2016) (providing practical considerations for speech interests and issues in private sector); Protected Speech and the Rights of Private Sector Employees: The Disloyalty Doctrine and Disparagement of the Employer, Bogatin, Corman & Gold, http://bcgattorneys.com/protected-speech-and-the-rights-of-private-sector-employees-the-disloyalty-doctrine-and-disparagement-of-the-employer/ (last visited Sept. 22, 2016) (describing NLRA, 42 U.S.C. §§ 151-69, and legal standards thereunder to determine if employee speech is NLRA protected).

[23] See Freedom of Speech in the Workplace: The First Amendment Revisited, supra note 22 (suggesting that although First Amendment does not apply, private sector employers should take note of other laws implicating speech rights).

[24] See Mike Florio, NFL: Players are Encouraged but Not Required to Stand for National Anthem, NBC Sports (Aug. 27, 2016, 1:50 PM), http://profootballtalk.nbcsports.com/2016/08/27/nfl-players-are-encouraged-but-not-required-to-stand-for-national-anthem/ (stating that NBA has national anthem rule). For further discussion of how the NFL differs from the NBA in this respect, see infra notes 25–26 and accompanying text.

[27] See, e.g., Rob Wile, 20 Years Before Colin Kaepernick, an NBA Player Refused to Stand for the National Anthem and Paid Dearly, Fusion (Aug. 29, 2016, 11:37 AM), http://fusion.net/story/341512/mahmoud-abdul-rauf-colin-kaepernick/ (recounting story of when Mahmoud Abdul-Rauf, former NBA player, refused to stand for anthem in 1996, and was subsequently suspended for one day, still stirring enough controversy to have American Civil Liberties Union release statement).

[29] Compare, e.g., Colin Kaepernick joins Oakland High School Football Team’s Protest, ESPN (Sept. 24, 2016), http://www.espn.com/nfl/story/_/id/17624951/san-francisco-49ers-quarterback-colin-kaepernick-joins-high-school-football-team-protest (sharing how high school players laid on backs with fists raised when national anthem played), and Edwin Rios, These Athletes Have Joined Colin Kaepernick in Protesting Racial Inequality and Police Brutality, Mother Jones (Sept. 12, 2016, 7:26 PM), http://www.motherjones.com/media/2016/09/nfl-players-join-kaepernick-solidarity-protest (listing other athletes that have joined protest), with Kaepernick Anthem Protests Spark Controversy in NHL, RT (Sept. 9, 2016, 2:36 PM), https://www.rt.com/sport/358812-nhl-player-anthem-protest/ (describing how Team USA’s hockey coach John Tortorella has threatened to put out any player who sits during anthem because it is “‘the most disrespectful thing you can do as a US citizen’” regardless of player’s reason) (quoting Tortorella).