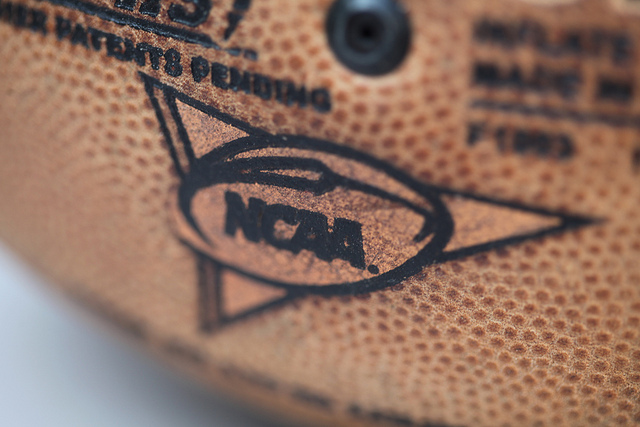 Following a series of highly publicized scandals, Baylor University’s football program once again finds itself negatively portrayed in the news.[1]  In August 2016, sophomore wide receiver Ishmael Zamora was cited by Waco police in response to a Snapchat video of Zamora brutally abusing his dog.[2]  The video shows Zamora kicking and whipping the dog in an apparent attempt to discipline the animal for a potty-training accident.[3]  Zamora was eventually charged with a “Class C misdemeanor and [was] given a citation that could cost up to $500.”[4]  Zamora released a statement through the University, stating, “I am sorry that I took out my frustration on my dog and accept the punishment that comes with it.  This incident will never, ever, happen again.  I truly love my dog, however, I know that my actions showed differently and I know that I made a big mistake.”[5]

Because the NCAA has no uniform discipline guidelines regarding student-athletes charged with crimes, Baylor head coach Jim Grobe was free to exercise his discretion when deciding how to punish Zamora.  Coach Grobe imposed a three-game suspension, stating, “Our goal is for this discipline to be educational and restorative, and I believe that we have taken corrective measures to help Ishmael learn from his actions and to better understand the behavior we demand of all students at the university.”[6]  Critics of the suspension argue that the punishment was too light because it did not ban Zamora from practice, covered non-conference games only, and did not reflect the gravity of Zamora’s misdeeds.[7]

Earlier this year, at a press conference in the wake of Baylor’s rape scandal and subsequent firing of longtime football head coach Art Briles, Coach Grobe emphasized his focus on discipline, stating, “Winning is very, very important, but not at the expense of character and integrity.”[8]  Grobe also said, “[t]his egregious stuff is off the table.  There’s no tolerance [for violent behavior].”[9]  Unfortunately, what the new head coach of a highly successful football program said in a press conference, and what he did in real-life, were quite divergent. This discrepancy is evidence that the NCAA needs uniform criminal conduct guidelines.

On the other hand, if the student-athlete is convicted of a crime, the head coach and athletic department are tasked with determining the player’s punishment.[13]  In the cutthroat world of college football, the punishments are often light in order to preserve the winning lineup.[14]

The NCAA’s Board of Governors, for its part, has “directed the leadership of Divisions I, II and III to consider developing legislation to address college athletes involved in reported incidents of sexual violence.”[15]  It is telling, however, that the directive is for the Divisions to “consider” developing legislation regarding incidents of sexual violence, and that the suggested legislation should comply with a 2014 resolution.[16]  The 2014 resolution merely requests that members “[c]omply with campus authorities and follow campus protocol for reporting incidents of sexual violence . . . educate student-athletes . . . [and] assure compliance.”[17]  There is no mention of the NCAA overseeing uniform discipline guidelines or banning violent players altogether.

Coach Grobe is known for being a “disciplinarian.”[18]  Before coming to Baylor, Grobe was the head coach at Wake Forest University and was the former head of the ethics committee for the American Football Coaches Association.[19]  Grobe said all the right things regarding character and integrity in his initial press conference.[20]

A three-game, non-conference suspension for back-talking or lateness would be “tough.”[21]  A three-game, non-conference suspension for misdemeanor animal abuse is not “tough.”  The message sent by Coach Grobe’s weak punishment is that abusing animals does not negatively impact one’s character and integrity, and that winning is in fact “very, very important.”  The NCAA already regulates almost every facet of student-athlete conduct.  It should also regulate the punishment of student-athlete criminal behavior.  The pressure on Division I coaches is too high for them to be allowed discretion when punishing athletes convicted of criminal behavior.[22]

[7] See Demand that Baylor Football Player Ishmael Zamora be Kicked Off the Football Team for Beating an Innocent Dog, Care2, http://www.thepetitionsite.com/takeaction/309/798/421/ (noting reasons petition signers want Zamora removed from the Baylor team). The petition for Zamora’s removal has more than 180,000 signatures at the time of writing. See id.

[13] See id. (observing there is no section in the Manual covering criminal behavior).

[14] See Kevin Trahan, The NCAA Talks Tough, but Does Nothing to Punish Violence Against Women, Vice Sports, (Aug. 14, 2015), https://sports.vice.com/en_us/article/the-ncaa-talks-tough-but-does-nothing-to-punish-violence-against-women (editorializing that NCAA needs to regulate student-athlete criminal conduct, and quoting attorney Tom Newkirk, who said, “Without any [criminal conduct] standards, it leaves a lot of subjectivity among the universities for how they’re going to handle it, which leads [to] this Wild West situation.”).

[20] See supra notes 8–9 and accompanying text. Grobe also stated in the press conference, “[e]very decision we make going forward will be made with Baylor University and all of our students and student-athletes in mind. I’m so proud to be a part of a renewed commitment to doing things the right way.” Werner, supra note 8.

[21] See generally Trahan, supra note 14 (“[Schools] talk tough, but know they will not be held accountable through any punitive action.”).