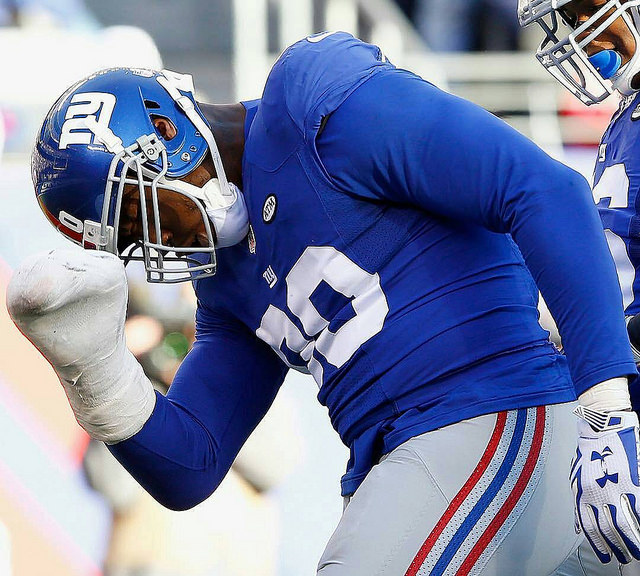 This time of year, there are always warnings about firework safety and some of the different risks and hazards that go along with igniting them.[1]  However, on July 4, 2015, New York Giants defensive end Jason Pierre-Paul was at his home in South Florida when he  ignored all of these warnings and “procured a large amount of fireworks for a Fourth of July celebration.”[2]  While Pierre-Paul was igniting one of the fireworks, an explosion went off in his hand and he was immediately transported to the Jackson Memorial Hospital.[3]  Pierre-Paul was rushed into surgery where more than a dozen pins were inserted to stabilize his injuries which included a broken thumb, an index finger that required amputation, a middle finger that “would never be the same,” and a palm in need of multiple skin grafts.[4]

Even with all the explosions and commotion, Pierre-Paul’s camp did a good job of keeping everything under the radar regarding his injuries.  However, on July 8, 2015, ESPN reporter Adam Schefter obtained medical charts of Pierre-Paul and tweeted a confidential image that showed Pierre-Paul had his right index finger amputated that day.[5]  In a lawsuit filed on February 24, 2016, Pierre-Paul named ESPN and Schefter as defendants in a lawsuit for invasion of privacy and disclosure of confidential information, “claiming that a single Tweet has caused damages in excess of $15,000.”[6]

Why Is Pierre-Paul Suing ESPN and Adam Schefter?

As an athlete, Pierre-Paul is used to being in the spotlight of the media and recognizes “the newsworthiness of his gruesome injury last summer.”[7]  However, what Pierre-Paul does not understand is how Adam Schefter came into possession of his medical records.[8]

Pierre-Paul is not the first athlete to file a lawsuit against the media.  For example, Ryan Zimmerman and Ryan Howard are currently suing the Al Jazeera network over allegations in The Dark Side, a documentary alleging ties between athletes and performance-enhancing drugs.[9]

What Is Pierre-Paul Claiming?

Prior to the filing of the suit, Jackson Memorial Hospital fired two of its employees in relation to the incident and reached a settlement with Pierre-Paul.[10]  Pierre-Paul states in his Complaint that, “Schefter improperly obtained Plaintiff’s medical records from the hospital and then, out of a selfish desire to ‘break news,’ electronically blasted the records to his approximately 4 million Twitter followers and made it available to anyone worldwide with Internet access.”[11]

The first claim filed is for a violation of Florida Statute 456.057, which “creates a broad doctor-patient privilege of confidentiality.”[12]  Basically, the statute provides that if a third party obtains confidential medical information, they are prohibited from further disclosing the information without written consent of the patient.[13]  Since Schefter obtained the medical records from the hospital, Pierre-Paul argues that Schefter is responsible under the statute for further disclosing the records without consent.[14]

The second claim against Schefter is a claim for invasion of privacy for publication of private facts.[15]  The elements in a claim for invasion of privacy include: “1) the publication, 2) of private facts, 3) that are offensive, and 4) are not of public concern.”[16]  First, Pierre-Paul states that Schefter disclosed the medical chart by publishing it on his Twitter account.[17]  Second, he argues that the medical chart was “private and not generally known.”[18]  Third, that the publication of the medical chart was “highly offensive to a reasonable person.”[19] Fourth, “while the amputation may have been of legitimate public concern, the [medical c]hart was not.”[20]

ESPN and Schefter filed their motion to dismiss on April 7, 2016, arguing that the Florida statute does not apply to Schefter’s tweet, and that the claim for publication of private facts must be dismissed because it relates to a “matter of public concern.” [21]

First, they argue that Florida Statute 456.057 does not impose any obligations on members of the general public who receive medical information, including members of the media.[22]  Second, the statute does not create a private right of action, because “nothing in the statute authorizes a party harmed by the unauthorized disclosure of medical information to bring a civil lawsuit.”[23]  Third, the statute could not constitutionally be applied to ESPN because Schefter’s speech was “true and related to matter of public significance.”[24]  Finally, the publication of private facts claim must be dismissed because Schefter’s tweet “relates to a matter of public concern” because Pierre-Paul is a public figure and the disclosure of the “fractional page of a highly technical documents of words” was not a privacy concern.[25]

One date has been set in the 2017 NFL preseason, and that is Pierre-Paul’s lawsuit against Adam Schefter and ESPN, for which U.S. District Judge Marcia G. Cooke set the  trial start date at August 7, 2017.[26]  The trial date was set notwithstanding the joint motion filed by attorneys for both sides to start the trial no earlier than February 19, 2018, “citing the importance of the league calendar.”[27]This year, Pierre-Paul is not lighting off any fireworks but instead will be advocating with the U.S. Consumer Product Safety Commission on the dangers of fireworks.[28]

[4] See id. (noting Pierre-Paul had to wrap his shirt around his hand after the accident in order to hold it together).

[5] See Darren Heitner, Should Jason Pierre-Paul Be Pointing his Finger at Adam Schefter?, Forbes (Feb. 25, 2016, 8:03 AM), http://www.forbes.com/sites/darrenheitner/2016/02/25/should-jason-pierre-paul-be-pointing-his-finger-at-adam-schefter/#37cee1d25e51 (recognizing Schefter is “always one of the first to report breaking NFL news”).

[8] See id. (recognizing when Pierre-Paul filed the motion, what he really wanted to know was how Schefter obtained the medical records).

[9] See Nathaniel Vinton, Here are Athletes Like JPP Who Have Sued the Media, NY Daily News (Feb. 25, 2016, 2:45 PM), http://www.nydailynews.com/sports/football/giants/athletes-jpp-sued-media-article-1.2543895 (recognizing Peyton Manning was also named in documentary but has not filed a suit on his own).  Lance Armstrong is perhaps the most famous athlete to file defamation lawsuits against the media.  Id.  However, since the doping allegations against Armstrong were found to be true, he “was forced to return the money he’d won from suing Walsh’s newspaper, London’s Sunday Times.” Id.

[17] See Complaint, supra note 11, at para. 33 (noting “Twitter is publicly accessible by anyone who can connect to the Internet”).

[22] See id. at 7 (arguing rather “it only applies to a limited category of third parties, like physicians and patients, whom have the right to obtain medical records from a health care provider”).

[23] See id. at para. 11 (noting Plaintiff cites no statutory basis for cause of action in Complaint).

[24] See id. at paras. 12–13 (stating a “broad interpretation of [the Florida statute] would violate the First Amendment by prohibiting the publication of truthful information relating to a matter of public concern”).

[25] See id. at paras. 16, 18 (concluding that Plaintiff fails to state a claim against Schefter and Complaint must be dismissed).

[27] See id. (noting neither party would be available for any trial during NFL preseason, season, and postseason).