With Over 50 Wins Throughout His Career, One of Muhammad Ali’s Greatest Came Outside the Ring 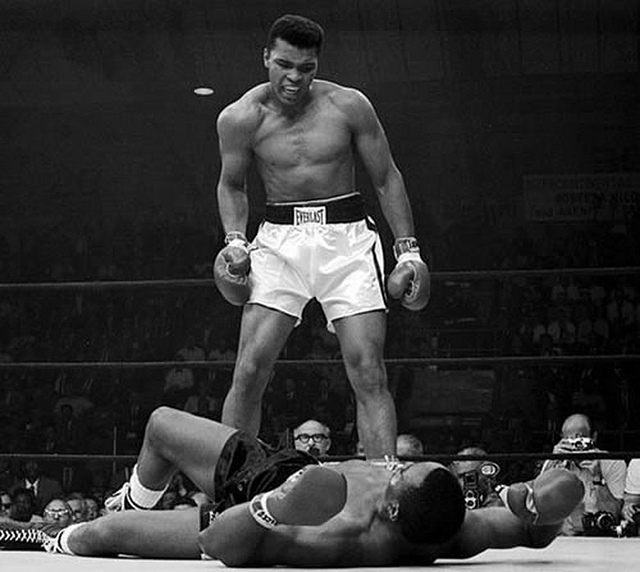 Most people remember Muhammad Ali as the greatest boxer the sport has ever seen. But, many of us forget the impact Ali had outside the ring.[1]  During his tenure at the top of the boxing world, the United States was knee deep in the Vietnam War.[2]  And with the Vietnam war, came the draft.[3]

When Ali was asked to comment about his status as being eligible for the draft, he stated, rather bluntly, “I ain’t got nothing against them Viet Cong.”[4]  Shortly thereafter, the Illinois Athletic Commission asked Ali to publicly apologize for his anti-war remarks.[5]  Ali partially complied, and he did make a public statement; he publicly refused to apologize.[6]

The Beginnings of a Court Battle

The local appeal board denied Ali’s application for conscientious objection..[12]  In April of 1967, Muhammad Ali arrived at his military induction, and refused to  be inducted into the United States Army.[13]  Subsequently, Ali was charged for willful refusal to submit to induction into the armed forces.[14]  While his criminal charges were pending, Ali had his license to fight suspended, and his heavyweight title stripped.

Being the fighter that he was, Ali took his “never quit” mantra to the court system.[16]  He lost the first round in the Court of Appeals, where his denial was upheld.[17]  But, in classic rope-a-dope fashion, Ali appealed to the United States Supreme Court and managed to pull out a winning decision.[18]

In a per curiam opinion, the Supreme Court overturned Ali’s conviction.[19]  Specifically, the Court held that “since the Appeal Board gave no reasons for its denial of the petitioner’s claim, there is absolutely no way of knowing upon which of the three grounds offered in the Department’s letter it relied.”[20]  Further, the Court found that there was absolutely no legal basis to believe that Ali’s objection to fighting in war was not a religiously based belief, and that those religious beliefs were not sincerely held.[21]

As he did throughout his career, Ali refused to quit when faced with adversity.  This attitude is what got The People’s Champ through the “Rumble in the Jungle” and the “Thrilla in Manilla.”[22]  But more importantly, this attitude set a precedent in United States courts and in professional sports.[23]  Legally, Ali’s court battle set the precedent that the government must actually show why it refuses to grant someone conscientious objector status.[24]  But professionally, Ali was one of the first athletes to stand up for what he believed in, and he fought on several fronts to make his point.[25]  On October 30, 1974, Muhammad Ali got back to where he was before his legal debacle, when he regained his heavyweight title by way of an eighth round knockout over George Foreman.[26]  Although his boxing is why most remember him, his grit, charisma, and compassion for standing up for himself is why he was so aptly called The People’s Champ.[27]

[26] See The Rumble in the Jungle, ESPN http://en.espn.co.uk/onthisday/sport/story/319.html (not title, date, time or author)

[27] See David Steele, Muhammad Ali was ‘The People’s Champ’ as much as ‘The Greatest’, Sportingnews (Jun. 4, 2016), http://www.sportingnews.com/other-sports/news/muhammad-ali-appreciation-peoples-champ-shook-up-the-world-vietnam-human-rights-international-icon/9f78d7uahl4o1num874r4jbjg.