What If They Forgot to Record the Super Bowl? 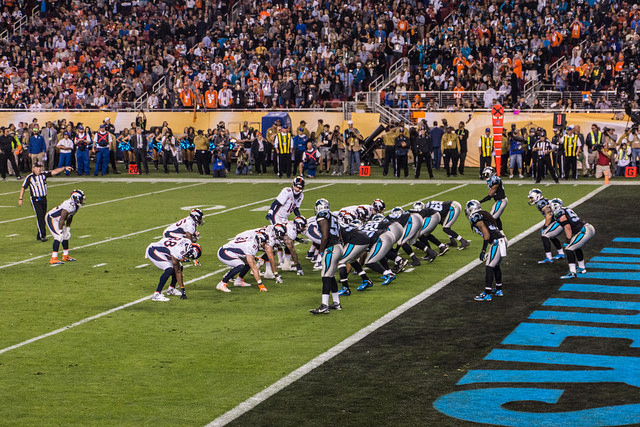 It’s been quite a year for my favorite sports teams.  My alma mater Stanford won the Rose Bowl, and finishing at No. 3 in the AP poll, the highest in its 120+ year history other than two national titles in 1926 (coached by none other than Pop Warner) and 1940.  My hometown Broncos won the Super Bowl for the third time using a historically good defense (I’ll take, “they weren’t quite as good as the 1985 Bears”).  And my professional home team, the Villanova Wildcats, just won its second NCAA Basketball title on the strength of the largest Final Four blowout in history followed by the first buzzer-beater three-pointer in NCAA Championship history.

But what if . . . no one recorded these games?  I don’t mean nobody at home—I mean the networks, too.  What if these games were broadcast into millions of homes, and then lost to the ether when they were over?  Hard to imagine as it may be, this is what happened after the broadcast of Super Bowl I.  Despite not one, but two, networks broadcasting the game, no one thought to make (and retain) a copy of the game.  This was, believe it or not, quite common at the time.  If a show was not expected to be re-aired in reruns (what we now call syndication), networks did not keep tapes.  Wikipedia aggregates stories that not only was Super Bowl I lost, but also parts or all of other Super Bowls, World Series games, and NBA Championship games are missing from our collective sports history.

Networks weren’t the only game in town, though.  It turns out that Super Bowl I was recorded by Martin Haupt at his office (a TV studio in Wilkes-Barre, PA) on Quadruplex tapes.  Haupt, apparently, thought the game would be important—a prescient insight given how many empty seats there were when you see actual game footage.  But the tape is far from perfect or complete.  It is missing halftime and much of the third quarter.  And it appears that even in the 1960’s recording devices were used to skip commercials—Haupt paused the tape for every commercial break, though the slow machinery means that much of the post-commercial play got cut off (Haupt was likely trying to conserve tape—the game tape still took a two reels).

This recording, however, has never been seen by the public.  The owner of the tape, Haupt’s son, has attempted to sell it to the NFL, which does not find it nearly as important and has offered little compensation.  Instead, the NFL has aired filmed game footage from the NFL Films archives that has been synchronized with radio broadcasts.  It’s a decent recording; I had thought that it was the long lost tape, but it wasn’t.

In the meantime, the NFL has reportedly told Haupt that he cannot sell the tape to anyone else for copyright reasons, raising a host of legal issues.

First, was the game broadcast copyrightable?  It was live, after all.  Under the current law, the answer is surely yes.  A live broadcast that is fixed in a tangible medium for more than a transitory duration by the owner is copyrightable.  Indeed, I call this the “NFL Rule” when I teach copyright, making the point that the rule is designed to protect works that would otherwise be considered improvised and thus unprotected.  But this was recorded in the 1960’s, under the 1909 act.  In that case, the answer is still yes—as of today.  It was technically never published under the 1909 copyright law, and so when the 1976 act was passed, it converted to a copyrighted work under the current rules.  There is an argument that recording the tape and then wiping it was too transitory to grant copyright protection, but given that the game may have been broadcast at least once more during the following year, it is hard to argue transitory duration.  But it may not have been federally copyrightable at the time.  If there were no registration, for example, then it would not have been.  It is difficult to know for sure.

Second, was it copyright infringement for Haupt to make the tape?  This is a harder question.  If there was no copyright at the time, then surely not.  But even if it were, then this is arguably a fair use—just like I recorded the NCAA Championship game late in the evening for my kids to watch the next day.  Of course, the Sony Betamax case that allowed time-shifting fair use came down in 1984, almost 20 years after Super Bowl I—but we won’t let that get in the way of our analysis.  But even if we apply time-shifting analysis, was this the purpose of the recording?  Haupt saved it for years, and the newspaper article discusses using the tape to pay for college.  This is not the type of recording that screams out fair use.

Third, can Haupt sell the tape to someone else, contrary the NFL’s wishes?  The answer here is also a maybe.  The broadcast is now protected by copyright, but if Haupt’s copy was obtained lawfully, he may dispose of it as he wishes.  It could be lawfully obtained if there were no federal copyright when it was first recorded.  Or it could be lawfully obtained if it were recorded using fair use.  If either are true, then Haupt can give it away or sell it to the highest bidder.  But note the irony: fair use typically implies a non-commercial type of use, and videotape fair use is based on person time-shifting.  To use that argument to justify the right to sell a copy seems difficult to square.  Much easier to justify is the notion that the broadcast simply wasn’t protected at the time.

Fourth, would Haupt infringe a copyright by playing a tape for the public?  Unlike the sale of the tape, playing the tape outside a small circle of family and friends (called “public performance” in copyright) would likely be copyright infringement today.  Because there is now a copyright, it is largely irrelevant whether the original copy was lawfully made—an argument critically important for the sale of the tape but mostly irrelevant for performance.  Thus, when we purchase a DVD or order a boxing match on pay-per-view, we may not put it on a big screen and charge admission.  The copy may be obtained legally and even sold to others, but may not be performed for the public.  On the other hand, Haupt might argue that if there were no copyright in place when the recording is made, then that particular recording may be performed, even after copyright attached in 1978.

Despite all of this analysis, we shouldn’t make too much of the IP issues.  After all, the NFL is not willing to pay much for these tapes because it already has game film, and highlight tapes already exist.  Indeed, other than ESPN Classic or periodic special runs, it is rare for an entire game to be replayed on television

I watched this game a couple days before I watched Super Bowl 50.  The differences in speed and other gameplay are stunning.  It is remarkable that the NFL didn’t think to keep copies of the original game broadcast.  Then again, ESPN Classic didn’t launch until 1995; who knew that people would sit around and watch entire games that happened 50 years ago?