The Secret Life of the Professional Umpire 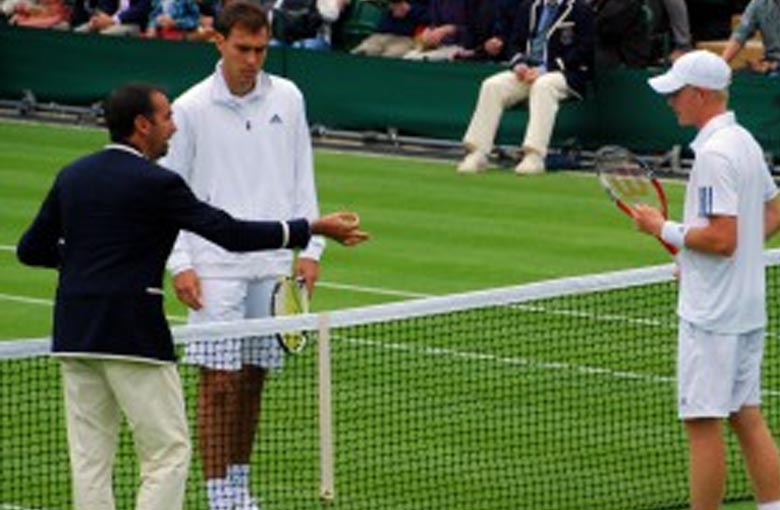 The elusive circle of professional game-changers known as umpires has finally made a scene – but just barely.  On Tuesday February 9, 2016, a press release revealed that several international tennis umpires face charges of corruption and permanent banishment from the profession.[1]  The umpires are accused of taking bribes and manipulating scores, facilitating a major gambling scheme.[2]  Most notably, umpires were found to be engaging in “courtsiding,” where an official viewing the event live delays updating scores for up to a full minute, giving gamblers time to place bets on points they know have already been scored.  Some umpires were even texting scores to gamblers before reporting them on-screen.[3]

These indiscretions have increased in number, but the International Tennis Federation (ITF) has kept the incident heavily under wraps.[4]  The most recent allegations have opened up to a revelation of multiple other sanctions the ITF imposed on umpires who used their position to gamble on match outcomes.[5]  The cover-up has led to pleas for more transparency in sports governance issues from influential campaigners and media committee members.[6]  These individuals believe lack of coverage on these issues provides incentive for more corruption.[7]

You Can’t Hide From the Replay

Tennis is not the only sport that has fans, players, broadcasters, and coaches alike outraged at the lack of accountability umpires continue to enjoy.  The media continues to push for harsher sanctions of umpires’ bad calls, which have a serious negative impact on teams’ chances in their league championships.[8]  Some critics support the instant replay feature as a way to open umpires’ actions to media scrutiny.[9]  Fans, players and coaches expect mistaken calls to be overturned, and pressures like these influence the industry’s decisions regarding instant replay as a permanent feature of professional sports.[10]  There is also pressure to make umpire success records and call history more easily accessible, creating more well-rounded and unbiased judgments of umpires.[11] Despite leagues instating on the replay, there still continues to be some secrecy about umpires’ identities and indiscretions.  As one baseball fan points out, “major league baseball is a game of constant public judgment.  The on-field judges should not be above that.”[12]

In some isolated instances, the replay has helped to bring some umpires’ mistakes out into the open.  For example, an umpire’s name and bad call was announced when the MLB publicly apologized to a team and player for mistakenly calling a player out when the replay revealed he had a valid hit.[13] However, the call still stood, and may actually have determined the outcome of the game.  The umpires’ insulation by its mother Association remains strong, with MLB spokespeople doing the explaining and apologizing after umpires botch questionable calls, even after lengthy reviews of video replay footage.[14]  Furthermore, umpires are not only insulated by the Association, but also by their colleagues, rendering them officially unaccountable to pretty much anyone.[15]

Although the replay system in the NFL gives referees slightly less wiggle room, the League still acknowledged the extreme deference referees enjoy on close call decisions in the games they are officiating.[16]  In fact, although one goal may be to hold referees accountable to higher-up officials, the replay system in the NFL is overall intended to assist refs, giving them another judge to consult to improve their chances of getting a call right.[17]  Commentators with instant replay still remark on referees’ privilege of anonymity even when the referees openly criticize their own replay interpretations.  NFL officials have even commented that although replay is necessary to the game, it may in fact create more ambiguity than it remedies.[18]

Is Judgment Day on the Horizon?

The sanction of tennis referees, while under wraps for years, is hopefully coming to fruition.[19] BBC announced that an investigation was attempted in response to tennis’s anti-corruption code back in 2009, but on the advice of their lawyers, tennis authorities once again buried the accusations.[20]  However, last year, an official was barred for life for attempting to manipulate scores, and another was suspended for leaking the health status of an athlete to facilitate betting results.[21]

Unfortunately, in American major league sports organizations, sports officials’ accountability has become more a safety hazard than a legal or disciplinary one.[22]  The problem seems to stem, unsurprisingly, from the perceived, and perhaps accurate, lack of accountability on refereeing officials in the industry.  As a result, players, and at times, even fans, are taking matters into their own hands.[23]

[16] See Will Brinson, NFL Passes Rule Allowing Refs to Consult with Officials on Replay, CBS Sports (Mar. 25, 2014, 11:27 am), http://www.cbssports.com/nfl/eye-on-football/24499958/nfl-passes-rule-allowing-refs-to-consult-with-officials-on-replay (describing what goes on “under the hood” during replay review at NFL games).