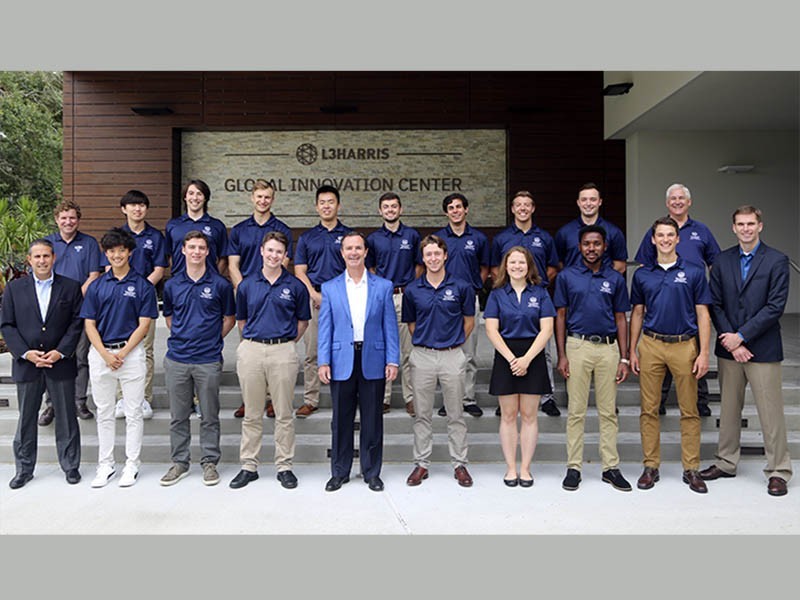 In 2017, Harris Corporation established a $1 million endowment fund in support of the Harris Summer Innovation Program (HSIP), which involves Villanova University students in real-world engineering challenges and fosters innovation and an entrepreneurial approach to problem solving. As of July 1, 2019, Harris and L3 Technologies combined in a merger of equals to form L3Harris Technologies, Inc., becoming the sixth largest defense company in the world. In response to this historic development, the College of Engineering is pleased to announce that HSIP will be renamed INNOVATE: The L3Harris Summer Program.

INNOVATE is founded upon a simple premise—the best way for students to learn engineering is to practice engineering. Through the program, self-directed teams engage in the engineering design process to build prototypes to address real world problems, which mirrors the practice of the professional engineer. INNOVATE seeks to develop future engineering talent by fostering an open environment where multidisciplinary teams can pursue their passions and sharpen their technical skills. It is this shared commitment to developing world-class engineers that forms the basis of the Villanova-L3Harris partnership and illuminates the spirit of INNOVATE.

For the fifth consecutive year, four student teams participated in INNOVATE, the eight-week (June-July) summer design program sponsored by L3Harris and the College of Engineering. The student teams were competitively selected for participation with the goal of designing and building original prototypes to solve unmet problems they had previously identified. The program culminates with a trip to Melbourne, Florida, where the student teams present their projects and prototypes to L3Harris engineering managers. During the visit, students also tour the company’s facilities, interview for internships and full-time positions and enjoy lunch with L3Harris CEO and Chairman William M. Brown ’84 ME, ‘87 MSME.

Now accepting applications. Deadline for pre-proposals: Friday January 24, 2020.
INNOVATE is open to all undergraduate engineering students and computer science majors. Students form their own four-person teams which are multidisciplinary in nature and are responsible for recruiting a Villanova faculty member to serve as their advisor. Finally, teams are required to submit an online pre-proposal and final proposal in order to be considered for entry into INNOVATE. It is through a competitive proposal process that four teams are ultimately selected to participate in INNOVATE. See details on the INNOVATE website.

These are the four projects undertaken by the 2019 teams:

Team Drastic Plastic
A team of rising juniors, Alec Cardenas ‘21 CE, Andrew DelDuca ’21 CpE, William Mallory ’21 ME and Connor Zendzian ’21 ME developed an eco-friendly machine to make the recycling process both fun and educational. Their goal was to create a device that would inspire people, especially children, to think differently about the waste stream. The idea morphed into developing an interactive mechanism to upcycle the nearly ubiquitous plastic water bottle.

When deciding on a product to create from water bottles, the team knew they had to consider design constraints, keep safety top of mind and limit the amount of energy used to produce the final product. After brainstorming an extensive list of ideas, the students decided to create a unique upcycled bracelet through a four-phase process. Their prototype machine employs manual components to both minimize energy usage and maximize kids’ hands-on engagement with the device, to produce a unique and attractive bracelet. After several more design iterations, the team plans to speak with local museums and sports venues about installing their device to bring greater awareness to the need to reduce, reuse and recycle.

Virtual Realm Interface Group
Rising juniors Sung Hyun (Rich) Kim ’21 CpE, Youngmin (YM) Kim ’21 EE, Bennett Steinbach ’21 CpE and Yuhan Wang ’21 ME combined their collective passions for gaming and virtual reality by working on a technology demonstration project to connect the real world with the virtual world. The team synchronized different commercial gaming systems, sensors and a radar system to simulate a baseball catch that would happen simultaneously in the virtual and real world. In the process, the team members taught themselves to code and tracked and mapped 23 different points on the body and linked them to a virtual avatar. Their product uses positional data from the user to make predictions before the ball is released as to where it will go. At the end of the eight weeks, their prototype allowed users to simultaneously track and catch the ball in both the real and virtual worlds. The team hopes to further develop the software to include the ball’s angle and velocity.

Cyber Home Group
Rising seniors Dominik Schab ’20 CpE, Preston Genett ’20 EE, Devin Groves ’20 CpE and Zachary Rosen ’20 CpE identified a gap in the cybersecurity industry and decided to tackle it for their summer design project. Projected shortages in the global cybersecurity workforce exceed 2.9 million and that is largely due to the limited availability of affordable and portable educational resources. And, with the burgeoning Internet of Things, connecting increasing numbers of consumer and industrial devices to the web, the threat from malicious actors has likewise grown. Recognizing the need for an affordable solution to train both students and adults to detect and defend against cyber-physical attacks, the team created a physical model of a connected Smart Home. Their model employs sensors and other components to represent real world connected devices like smart thermostats and baby monitors, which can be manipulated through a web interface. Two members of the team will continue refining the model through their senior capstone design project, developing lesson plans to accompany common attack and defense scenarios and adding features, such as a smart car.

Feastimate
A team of rising juniors that includes mathematics major Barbara Fiedorowicz ’21 CLAS, Aldo Pierini ’21 CEE and Anthony Etim ’21 EE set a goal of helping food service establishments, namely university and commercial dining halls, reduce food waste, which will ultimately cut costs and reduce greenhouse gas emissions. They realized that while establishments are collecting some related data, it was not being analyzed in a way that would help them accurately predict future demand and thereby minimize food waste. Working in partnership with Villanova’s Dining Services department, the team evaluated the data that was being collected and learned that last semester alone, some 37,000 lbs. of food waste was generated, representing approximately $40,000. Using their Feastimate system, the team streamlined and automated data collection processes, instrumented the salad bar to obtain more granular data and developed a novel algorithm that would enable dining service workers to forecast the right amount of food to serve on a given day, time and year. The team will continue to work in collaboration with Dining Services to improve their software package and contribute to the University’s significant sustainability efforts.