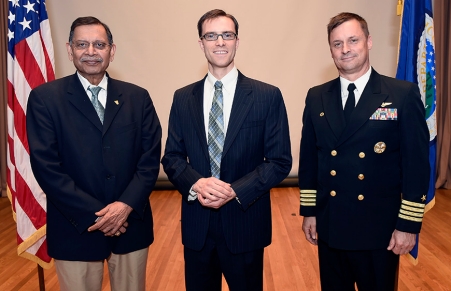 At a ceremony on Wednesday, May 4, 2016, alumnus Colin D. Joye, PhD, '02 EE was presented with the prestigious Presidential Early Career Award for Scientists and Engineers (PCASE). The day after the ceremony, the award recipients visited the White House where they met with President Obama. Dr. Joye, an engineer with the U.S. Naval Research Laboratory, was recognized for outstanding research accomplishments in microfabrication techniques, pioneering work in imaging and communications, and dedication to outreach and mentoring students around the world. He is the son of Villanova University Professor Emeritus Donald Joye, PhD, Chemical Engineering.

A 2002 Villanova Electrical Engineering graduate, Joye pursued graduate studies in that discipline earning his master's and PhD from Massachusetts Institute of Technology (MIT) in 2004 and 2008, respectively. He became a visiting scientist for MIT and worked at the Plasma Science and Fusion Center in the Waves and Beams Division before joining the Naval Research Laboratory in 2008. In 2013, Joye was honored with the Dr. Delores M. Etter Top Scientists and Engineers of the Year Award for his contributions to the Navy, and in 2014 he received the Technology Transfer Award.

The Presidential Early Career Awards were first introduced by President Clinton in 1996 and continue to be coordinated by the Office of Science and Technology Policy within the Executive Office of the President. PCASE is the highest honor bestowed by the United States government on science and engineering professionals in the early stages of their independent research careers. Awardees are selected for their pursuit of innovative research at the frontiers of science and technology and their commitment to community service as demonstrated by scientific leadership, public education or community outreach.