Over the past few years, Villanova University has been awarded several grants from the Kern Family Foundation to support the implementation of entrepreneurially-minded learning in the College of Engineering. This past summer, Visiting Assistant Professor of Mechanical Engineering David Jamison IV, PhD, received funding to develop and implement an ideation term project focused on the “opportunity” and “impact” skill areas within the Kern Entrepreneurial Engineering Network (KEEN) framework. Dr. Jamison’s goal was to enable students in his Introduction to Biomechanics senior elective course to develop skills in opportunity identification and impact evaluation, fostering the KEEN Entrepreneurial Mindset behaviors of “curiosity” and “creating value.”

Early in the semester, Dr. Jamison organized his class into six teams of three to four students, and instructed them to interact with potential customers and brainstorm several business opportunities relevant to the biomechanics field. Prospective customers included the Villanova School of Nursing, local hospitals and medical centers, and medical device companies. Students were tasked with assessing their initial ideas based on their merits and potential impact to the customer, the company and society at large. Concepts were then refined, not just through calculations, but also market analysis, consideration of resources, a business model, intellectual property considerations, and an understanding of their competition. The process continued throughout the semester until teams felt they had arrived at a near optimal product or service. 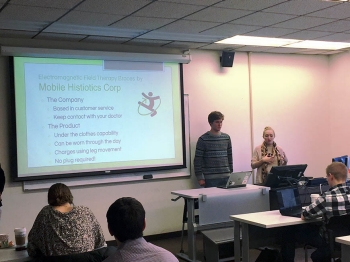 On the final day of class, each team presented its ideas in “Shark Tank” style, which involved articulating the need for their concept, its technical and financial feasibility, and its value to their customer(s). Students also had to be prepared to answer what were often difficult questions from Dr. Jamison and three guest judges: Edmond J. Dougherty’69 EE, ’86 MSCS, director of the Engineering Entrepreneurship program; guest lecturer David Szabo ’03 MSME, who runs his own company in the medical training market; and Kaitlin Waller ’17 VSB, a finance/economics major who participated in Villanova’s 24-Hour Imagination Quest competition.

Force Impact Technology (FIT) — A specially designed athletic mouthguard (Fitguard) that calculates the force of a hit as a means of diagnosing concussions.

Freedom Power Pack — A device that extends the battery life of SynCardia Freedom Driver, an artificial heart, which is used by those awaiting a heart transplant. The Freedom Power Pack would generate energy as the individual walks.

Artificial Articular Cartilage — An improvement on artificial cartilage to benefit those with osteoarthritis.

Smart Patch — Replacing the standard eye patch, these stylish eyeglasses would help those with “lazy eye” and crossed-eye conditions.

Pitch Perfect —To be worn by pitchers, this device is designed to prevent injury to the medial elbow, which typically results in Tommy John surgery.