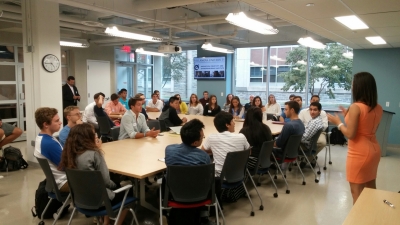 Students took turns presenting their ideas to a room full of aspiring entrepreneurs.

Innovation and entrepreneurship are integral parts of society that keep our culture progressing forward. Especially now, as we have moved further into the 21st century, the smartphone revolution has blown open the doors to an entirely new world of creative products and apps to meet ever-growing demand. There is no shortage of brilliant ideas out there, but taking the next step and being able to make those ideas a reality can be a challenge, which is why programs like Villanova University’s IdeaBounce® exist.

IdeaBounce® is facilitated by Villanova’s Innovation, Creativity, and Entrepreneurship (ICE) Institute. Through an online forum, individuals can promote their ideas in order to find the help they need at any stage of the process—from initial development to legal advice. All ideas are accepted, and include an enormous variety of products and services for all industries. There have been nearly 750 submissions since the program began, ranging from “Edible Tape” to “Keurig in Your Car” to a “Make-Your-Own-Sushi” restaurant.

On September 21, IdeaBounce® held a live event in the new Idea Accelerator in Falvey Memorial Library. Ten different pitches were presented—nine by students and one by an alumnus—each having two minutes to offer an explanation of their product or service, its stage in the development process, and where they need assistance. Representatives from nearby companies were in attendance to see the pitches, which included an app for finding people to play basketball with, an all-natural energy drink, and electromagnetically removable tattoo ink, among others.

The Idea Accelerator itself is a great addition to Villanova’s campus. New this semester, it consists of private spaces where groups or individuals can work, interactive televisions and projectors, and a “tinkering lab” that includes a 3D printer. II Luscri, ICE Executive Director, says, “It looks cool and there’s a great deal of functionality.” The Idea Accelerator is open to all students and will host workshops and networking sessions to help them not only work on refining their ideas, but teach them how to get their ideas off the ground and turn them into real products or services. Recently the ICE Institute offered “How to Land a Job at a Startup,” and in October it will host a presentation by venture capitalist Wayne Kimmel.

Luscri and the rest of the ICE team hope to continue expanding the program and keep striving to encourage more and more students to move their ideas out into the world.