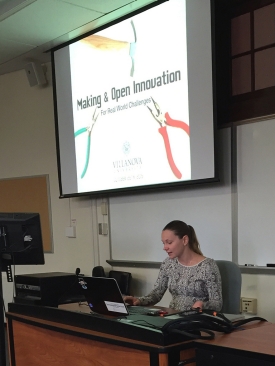 Professor Benedetta Piantella presented to a class of Electrical and Computer Engineering students.

Recently, Villanova had the pleasure of welcoming Professor Benedetta Piantella to speak about her experiences in open source software and hardware development. As a woman in engineering it is always interesting to hear from other women about their experiences in the field. To my surprise, Piantella opened her presentation with a disclaimer saying, “I’m not an engineer.” Knowing of her technological work in the humanitarian field, however, piqued my interest, despite her not being an engineer. In 2004, Piantella was in Sri Lanka during the Indian Ocean tsunami. As a survivor and first responder, this experience led her to see the importance of emergency relief work and how she could apply her arts degree to humanitarian projects. She wondered what kind of technology existed that might have been able to help the people in this region, but found very little to work with. This prompted Piantella to venture into the hardware field to see what solutions she could create. Over the past 10 years she has worked with dozens of companies and organizations as she drives her passion to build hardware that helps.

One product Piantella created with the United Nations Children’s Fund (UNICEF) is Device X. She prefaced her introduction to the product saying, “They really shouldn’t let me name things,” but as a multipurpose device the name represents its many functions. The purpose of Device X is to make it easier to diagnose severe malnutrition in children. The idea resulted from Piantella’s experience in health clinics in Kampala, Uganda. There, paper records piled up and by the time they reached the database, would often be obsolete. Device X is designed to transmit health forms immediately, allow for parents to receive updates on future steps, and to provide a physical receipt that the family can take home. One lesson Piantella gained from this experience was the importance of going to the people you’re trying to help and finding out exactly what they need, because what you think people need isn’t necessarily what they want.

Piantella’s other projects include Open Source Lion Tracking and Quench.  Lion tracking collars were created to observe lions in Kenya. This product, as well as Device X, uses cellular network towers to transmit data such as migration patterns and location via open source hardware and software. Though many people assume that much of Africa has minimal access to technology, Piantella noted that in some places she found better service than in the United States. The tracking collars’ open source features intrigued many companies as well as individuals who were interested in using its capabilities as a way to track vaccines, people, and atmospheric conditions such as temperature and humidity. Though it sounds slightly sinister, those who suggested tracking people were mainly parents interested in tracking their children in the case of an emergency. Temperature and humidity information is of interest to companies so that they can figure out the best route for vaccines and how much refrigeration is needed.

Piantella developed Quench with Brice McLaren to help increase access to potable water. In several African countries the system for retrieving water was unorganized, and those governments contacted Piantella and McLaren for a solution. The time to purchase water wasn’t consistent, the cost was not the same, and the size of the containers varied. Quench is a system by which a prepaid card can be used to get water at any time of day, as well as a uniform container. This project is still being developed by McLaren who is adapting the device so that it addresses the concerns of the people it is being created for.

Currently, apart from her research on open source hardware solutions, Piantella teaches graduate courses for NYU’s Interactive Telecommunications Program where she highlights what she has learned through her work. Among the lessons she’s learned:  Local resources should be used so that if anything breaks the parts can be fixed quickly and at a lower cost. Failure is a part of learning. Don’t give up; patience is key. And finally, when solving a problem it is important to go to the places you are trying to help, get the community’s feedback, and partner with them to build a product that will suit their needs.