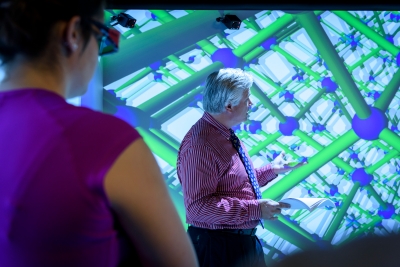 Assistant Professor of Electrical and Computer Engineering Mark Jupina, PhD, explains how the CAVE’s immersion technology will allow students to move through structures.

This past summer, Assistant Professor Mark Jupina, PhD, Electrical and Computer Engineering, worked with Electrical Engineering senior Olga Cabellero to develop course exercises for use in the CAVE. He notes the advantages of working in this environment:  “Within the CAVE, students are able to better visualize, and thereby analyze, some of the properties of atomic crystal structures in metal and semiconductor materials. In the past, we would use ‘ball and stick’ model kits to build and visualize these crystal structures.”  Going beyond the “ball and stick” models allows students to discover how the orientation of a semiconductor crystalline material affects the properties of an electronic device.

In the fabrication of silicon devices, dopants are often incorporated into the silicon wafer through a technique known as ion implantation.  In ion implantation, ions of a material are accelerated in an electric field and impacted into a solid. As the ion travels through the target substrate, the ion typically encounters collisions with the crystal lattice nuclei before reaching its final location within the lattice. In certain crystallographic directions, channels exist which allow the implanted ions to travel greater distances since the ions do not undergo collisions with the lattice nuclei. In the CAVE, students were able to see the silicon crystal lattice from an ion’s perspective and gain an understanding of the effects of ion channeling and how to prevent it.

On the day of the interactive session, students in the course arrived at the CAVE in small groups and spent 30 minutes conducting exercises. “What we’re basically doing is using it as a 3-D computer screen,” Dr. Jupina explained as he proceeded to outline the assignment. “As we become more familiar with the facility’s capabilities, we’ll become more sophisticated in how we use it.” It was evident as the students worked through each of four exercises that the more complicated the structure, the more useful the technology. Special 3-D glasses allowed students to virtually move through the images. Junior Cole Borowski found the experience “really neat and full of potential.”