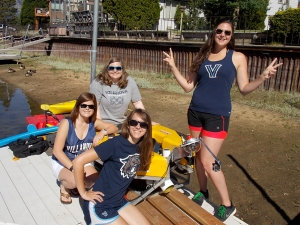 Villanova University’s College of Engineering is one of 22 schools in the Kern Entrepreneurial Engineering Network (KEEN), an initiative of The Kern Family Foundation. The Network encourages intercollegiate student projects across colleges and universities. Opportunities to work together help foster students’ entrepreneurial mindset and professional skills in communications, teamwork and collaboration, which they will need in their careers.  This past academic year, Chris Kitts, PhD, Associate Dean of Research and Faculty Development at Santa Clara University’s School of Engineering, led a group of Villanova and SCU students in a research project involving Underwater Remotely Operated Vessels (UROVs). 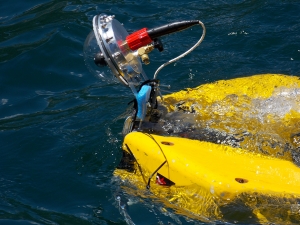 The camera system featured a custom gasket and 12 stainless steel bolts that were used to seal the dome to the case.

Associate Professor Garrett Clayton, PhD, the Villanova team’s faculty advisor, provided capable guidance throughout the project.  The students first tested the UROV attachment in the University swimming pool. They explained, “The challenges of the project included designing a custom enclosure with an optically clear dome that could withstand pressures up to 250 PSI.” Finite Element Analysis (FET) was conducted to ensure the structural integrity of the system under pressure. Another challenge involved designing the camera system to be slightly less than neutrally buoyant to have negligent impact on balancing the UROV.  In the final prototype, a custom gasket and 12 stainless steel bolts were used to seal the dome to the case.  Multiple mounting brackets were constructed to allow for mounting options on various UROVs, and tethers were fitted with watertight connectors.

George Simmons, director of Villanova’s Multidisciplinary Design Laboratory, provided resources for the project and also accompanied the Villanova team to Lake Tahoe, Calif. for field testing of the UROV camera system. The SCU team brought its Triton UROV, an outboard motorboat and a pontoon boat to conduct tests. The Villanova underwater camera system was mounted on the UROV for initial tests, which demonstrated excellent video quality and pan/tilt capability.  Additional tests included lowering the camera to various depths up to 300 feet where the camera system operated flawlessly without leaking.