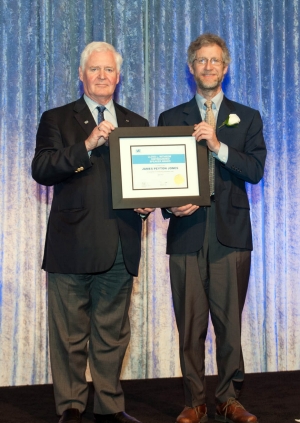 Dr. Peyton-Jones is director of the College of Engineering’s Automotive Research Laboratory and former director of the Center for Nonlinear Dynamics and Control. His areas of expertise include Nonlinear Dynamics, Signal Processing, Control and Automotive Systems. Dr. Peyton-Jones’s most recently published research, “Threshold Optimization and Performance Evaluation of a Classical Knock Controller" and “Recent Advances in Knock Analysis, Simulation, and Control,” has appeared in the SAE International Journal of Engines. “Integrating the Microsoft Kinect with Simulink: Real-time Object Tracking Example” was published in IEEE/ASME Transactions on Mechatronics.

In April 2015, Dr. Peyton-Jones and Jesse Frey, PhD, associate professor of Mathematics, received a $224,000 award from Chrysler for a two-year study of “Stochastic Knock Analysis and Control.”

Dr. Peyton-Jones was presented with the Lloyd L. Withrow Distinguished Speaker Award during the SAE World Congress, which was held April 21-23 in Detroit, Michigan.