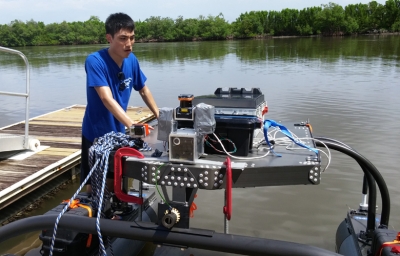 Gin Siu Cheng ’14 CpE with the WAM-V in Florida.

Maritime RobotX Challenge tasks teams with building an autonomous boat that can operate without human intervention or remote control; Winning team to be awarded a $100,000 prize

VILLANOVA, Pa. –Villanova University College of Engineering students have been chosen as members of one of three teams that will represent the United States in the highly selective and inaugural Maritime RobotX Challenge. The competition will be held October 20-26, in Marina Bay, Singapore. Sponsored by the U.S. Office of Naval Research and the Association for Unmanned Vehicle Systems International (AUVSI) Foundation, RobotX was created as a pinnacle science, technology, engineering and mathematics (STEM) event to promote interest among Pacific national partners in the science and technology of autonomous systems.

C. Nataraj, PhD, professor and chair, Department of Mechanical Engineering, the team’s leader and advisor, will travel to Singapore with Garrett Clayton, PhD, associate professor, Department of Mechanical Engineering, four undergraduate and two graduate students for the Challenge. Villanova is one of the only teams to have both graduate and undergraduate students working on RobotX, and has partnered with Florida Atlantic University (FAU) to create a team for the competition.

“It is incredibly gratifying to be selected for this experience, and I am confident that our team will do well,” says Professor Nataraj. “The competition is extremely challenging and extends significantly beyond the state of the art in autonomous systems research.  There are few in the industry, academia or military to whom we can go for assistance because this is something that’s never been done before.”

The Villanova-FAU team is one of 15 elite teams from five Pacific Rim countries - the United States, Singapore, Australia, South Korea and Japan – that have been working for the past year to prepare for RobotX.  Teams with proposals of the highest caliber were selected to compete, and in being selected Villanova and FAU have distinguished themselves as being among the strongest engineering programs in the country.  Also representing the U.S. in the competition are an MIT-Olin College joint team and a team from Embry-Riddle Aeronautical University.

“Villanova entered the competition with FAU after realizing our complementary strengths,” explains Professor Nataraj. “We met FAU’s team during the 2012 International Roboboat Competition and we discovered we each had areas of expertise that would prove valuable in the RobotX Challenge.”

FAU’s Department of Ocean Engineering and the school’s proximity to the ocean provide a natural advantage for testing the WAM-V boat. FAU has housed the WAM-V boat over the past year and contributed to its systems engineering and low-level control. The autonomy experts at Villanova have managed high-level control, vision-based navigation, localization and mapping. The Villanova team developed technology based on a 4-foot WAM-V prototype, and made a number of trips to FAU over the past year in order to apply mechanics to the actual boat.

To start the competition on an even playing field, each of the 15 teams were  given a 16-foot maritime Wave Adaptive Modular Vessel (WAM-V) boat, and were challenged to develop sensors, controllers and software algorithms that would transform it into an aquatic robot that can autonomously complete a number of tasks. The autonomous vessels will be put to the test in Singapore when they are launched from a floating platform and must complete five mission tasks, in order, autonomously, on a course. The tasks involve navigation and control; obstacle detection and obstacle avoidance; symbol recognition and vehicle docking; underwater search and reporting; and observation. The winning team will be awarded a $100,000 prize.

“The research tasks involved in successful execution of the project are cutting edge and challenging,” said Professor Nataraj. “The project is multi-disciplinary, so the student team consists of mechanical, electrical and computer engineers at Villanova, and our partner at FAU has a team of ocean engineers.  Working in such an interdisciplinary setting is a rare and invaluable learning experience for the students and it truly reflects the real-world industrial scenario.”

To learn more about the RobotX competition, including the mission tasks presented to each team, visit www.robotx.org.