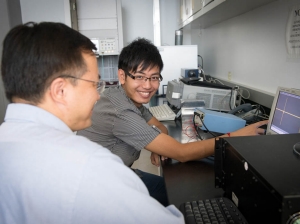 Mr. Si Qin, a research assistant in the Center for Advanced Communications (CAC) and a PhD student in the Department of Electrical and Computer Engineering, won first place in the student paper competition at the 2014 IEEE Benjamin Franklin Symposium on Microwave and Antenna Sub-systems (BenMAS). Titled “DOA estimation of mixed coherent and uncorrelated signals exploiting a nested MIMO system,” the award-winning paper was co-authored by Qin’s lead advisor and co-advisor, Research Professor Yimin Zhang, PhD, and CAC Director Moeness Amin, PhD. It develops a novel array signal processing technique to perform effective direction-of-arrival estimation in a multiple-input multiple-output sensor platform, and can be applied to the areas of both radar and sonar. This research is sponsored by a five-year grant from the Office of Naval Research, for which Drs. Amin and Zhang, and Research Professor Fauzia Ahmad, PhD, serve as principal investigators.

The BenMAS symposium, which is sponsored by the IEEE Microwave Theory and Techniques and Antenna Propagation Societies, was held in Philadelphia on September 27, 2014.  Thirty-nine papers, with a student as first author, were submitted from the United States and six other counties. Eight were selected as finalists and presented in the competition, and awards were determined by a judging committee consisting of renowned experts from both academia and industry. As the student winner, Qin receives a certificate and a cash prize of $500.